The 4th Senate District of Wisconsin is one of 33 districts in the Wisconsin State Senate. [3] Located in southeast Wisconsin, the district is entirely contained within northern Milwaukee County. It comprises part of the city of Milwaukee's north side, as well as the village of Shorewood, the southern half of the city of Glendale, and part of northern Wauwatosa. [4]

Lena Taylor is the senator representing the 4th district. She was first elected in the 2004 general election, and is now serving her fifth term. Prior to her election as senator, she was a member of the State Assembly, representing the 18th Assembly district from 2003 to 2005. [5]

The district is also located within Wisconsin's 4th congressional district, which is represented by U.S. Representative Gwen Moore. [7]

At the time of the creation of the state of Wisconsin, the 4th Senate District was defined in the Constitution as consisting of Fond du Lac and Winnebago counties. [8] In the first two sessions of the state legislature, the 4th District was represented by:

The Senate was redistricted from 19 to 25 districts before the 1853 session; the old 4th Senate District was now the 20th and 21st Districts, and the new 4th District consisted of the Towns of Erin, Richfield, Germantown, Jackson, Polk, Hartford, Addison, West Bend, Newark, Trenton, Farmington, Kewaskum and Wayne, in Washington County, formerly part of the original 11th District. The new 4th was represented by:

For the 1857 session, the Senate was expanded to 30 seats; the new 4th district included all of Washington County now, and once more elected:

As of 1862, the Senate expanded to 33 seats, a size it would retain well into the 21st century; the 4th District remained unchanged. It elected:

In 1871, the Senate was drastically redistricted. Washington County became part of a revised 33rd District. A new 4th District was created, consisting of Monroe and Vernon Counties (formerly parts of the 31st and 30th Districts respectively). This new district elected:

In 1876, the District lost Monroe County, and gained Crawford County instead. The new district elected:

In 1887, the Senate districts were again totally revamped; the new 4th District consisted of the 1st, 6th, 9th, 13th and 18th Wards of Milwaukee (the old 4th was split between new 16th and 31st Districts). It elected

In 1891 and 1892, the Senate was redistricted; after lawsuits, the 4th District lost the 6th and 9th Wards, gaining the 3rd and 7th Wards instead. It elected:

By 1896, the Milwaukee portion of the 4th District had been reduced to the 6th, 13th, 18th and 21st Wards, but it gained Whitefish Bay, and the Towns of Granville and Milwaukee.

After the 1901 redistricting, the 4th consisted of Milwaukee's 1st, 13th, 18th and 21st Wards and added the Villages of East Milwaukee and North Milwaukee.

After the 1921 redistricting, the 4th lost Milwaukee's 1st Ward, but gained its 25th, and lost Granville and North Milwaukee (the former East Milwaukee was now Shorewood). This district re-elected Morris for over a decade to come. By the 1931 redistricting, the City of Milwaukee portion of the 4th was reduced to the 13th, 18th and 21st Wards, but the district included the Town of Milwaukee and the village of Shorewood, plus the addition of the villages of Fox Point and River Hills. It continued to elect Oscar Morris until his 1939 death in office.

The 1950s was a period of redistricting plans, referenda and lawsuits. By 1954, the 4th District still had three Milwaukee Wards (the 1st, 18th and 20th), Fox Point, River Hills, Shorewood, and Whitefish Bay, and added Bayside, Brown Deer, and Glendale (which between them had absorbed all of the old Town of Milwaukee). This new 4th District elected:

After more lawsuits and failure by the legislature to act, in 1964 the Wisconsin Supreme Court reapportioned the legislative districts for the 1964 elections. The 3rd and 18th Wards of the City of Milwaukee, the part of Bayside in Milwaukee County, Brown Deer, Fox Point, River Hills, Shorewood and Whitefish Bay became the new 4th.

In 1971, the legislature was reapportioned without incident. The new 4th encompassed the seven North Shore suburbs, but also Thiensville, Mequon, and eight townships in Southeastern Washington County, from Erin in the southwest to Farmington in the northeast. This new district elected:

In 1984, an election was held under a plan passed by the legislature in 1983, under which the 4th consisted of the North Shore suburbs east of Brown Deer and Glendale, plus part of Milwaukee's inner city and the East Side of Milwaukee east of the Milwaukee River south to where the river flows into Milwaukee's harbor.

A 1992 court-ordered redistricting moved most of the district west of the Milwaukee River, except for Glendale and part of Shorewood, and added a large slice of the inner city, extending at its westmost to the county line with Waukesha County. This new 4th elected:

A new court-ordered map was created in 2002, by which the District was moved even further west into the inner city and out to 124th Street. In 2004, it elected Lena Taylor, the present incumbent. The 2011 redistricting expanded the portion of the district in the inner city, while still retaining Shorewood and part of Glendale. Taylor was re-elected from that district in 2012.

Note: the boundaries of districts have changed over history. Previous politicians of a specific numbered district have represented a completely different geographic area, due to redistricting.

The 1964 United States House of Representatives elections was an election for the United States House of Representatives in 1964 which coincided with the election to a full term of President Lyndon B. Johnson. Johnson's landslide victory over Barry Goldwater allowed his Democratic Party to gain a net of 36 seats from the Republican Party, giving them a two-thirds majority in the House. The election also marked the first time since Reconstruction that Republicans made inroads in the deep South.

Wisconsin's 4th congressional district is a congressional district of the United States House of Representatives in Wisconsin, encompassing a part of Milwaukee County and including all of the city of Milwaukee and its working-class suburbs of Cudahy, St. Francis, South Milwaukee, and West Milwaukee. Recent redistricting has added the Milwaukee County North Shore communities of Glendale, Shorewood, Whitefish Bay, Fox Point, Bayside, and Brown Deer to the district. It is currently represented by Gwen Moore, a Democrat.

William R. Kasik was a Wisconsin businessman and insurance agent who served one term as a Republican member of the Wisconsin State Assembly from the 19th Milwaukee County district.

Gus Menos was an American politician and jeweler from Wisconsin.

The 17th District of the Wisconsin Senate is located in south-western Wisconsin, and is currently composed of all of Grant, Lafayette, Juneau, and Richland counties, and parts of Iowa, Sauk, Green, Monroe, and Vernon counties.

The 28th District of the Wisconsin Senate is located in Southeastern Wisconsin, and is currently composed of parts of Milwaukee, Waukesha, Racine, and Walworth counties. During the late 19th and early 20th century, it was located around Richland County, Wisconsin and neighboring counties.

The 10th Assembly District of Wisconsin is one of 99 districts in the Wisconsin State Assembly. Located in southeastern Wisconsin, the district is entirely contained within northeastern Milwaukee County. The district comprises several neighborhoods of the north side of the city of Milwaukee, including the Williamsburg Heights, Arlington Heights, and Grover Heights neighborhoods, as well as the neighboring village of Shorewood. The district is represented by Democrat David Bowen, since January 2015.

The 12th Assembly District of Wisconsin is one of 99 districts in the Wisconsin State Assembly. Located in southeast Wisconsin, the district is entirely contained within northwest Milwaukee County. It comprises much of the north side of the city of Milwaukee, as well as part of northern Wauwatosa. The district is represented by Democrat LaKeshia Myers, since January 2019.

The 18th Assembly District of Wisconsin is one of 99 districts in the Wisconsin State Assembly. Located in southeast Wisconsin, the district is entirely contained within the boundaries of the city of Milwaukee in central Milwaukee County. It comprises neighborhoods of Milwaukee's west side, including Washington Heights and Sherman Park. It includes landmarks such as the Miller Brewing Company and Washington Park. The district is represented by Democrat Evan Goyke, since January 2013.

The 21st Assembly District of Wisconsin is one of 99 districts in the Wisconsin State Assembly. Located in southeastern Wisconsin, the district covers the southeast corner of Milwaukee County, including all of the suburban cities of Oak Creek and South Milwaukee, as well as a few blocks of the neighboring city of Franklin. The district is represented by Republican Jessie Rodriguez, since winning a special election in November 2013.

The 24th Assembly District of Wisconsin is one of 99 districts in the Wisconsin State Assembly. Located in southeastern Wisconsin, the district comprises the villages of Brown Deer and River Hills in Milwaukee County, as well as half of Mequon in Ozaukee County, Germantown in Washington County, and part of Menomonee Falls in Waukesha County. The district is represented by Republican Dan Knodl, since January 2009. 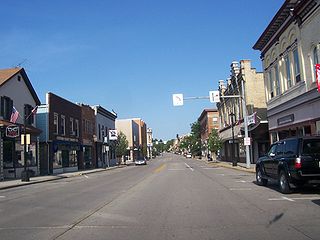 The 27th Assembly District of Wisconsin is one of 99 districts in the Wisconsin State Assembly. Located in eastern Wisconsin, the district comprises northeast Sheboygan County and southeast Manitowoc County. It includes part of northern Sheboygan, as well as the cities of Plymouth and Kiel, and the villages of Cleveland, Elkhart Lake, and Kohler. It also contains Lakeland University, the Whistling Straits and Blackwolf Run golf courses, the Road America motorsport course, and the Sheboygan County Memorial Airport. The district is represented by Republican Tyler Vorpagel, since January 2015.