Grandidier's mongoose (Galidictis grandidieri), also known as the giant-striped mongoose or Grandidier's vontsira, is a small carnivoran that lives only in a very small area of southwestern Madagascar, in areas of spiny forest vegetation. It is pale brown or grayish coloured, with eight wide, dark stripes on its back and sides. Grandidier's mongoose is larger than the related broad-striped Malagasy mongoose, G. fasciata, and its stripes are not as wide. The species is named after Alfred Grandidier.

This species has been called one of the rarest carnivorans in the world. [2] With a few exceptions, the majority of records of G. grandidieri come from a narrow zone at the western edge of the Mahafaly Plateau in the Parc National de Tsimanampetsotsa, making it the Madagascan carnivore with the smallest range.

Nocturnal and crepuscular, this species lives in pairs which produce one offspring a year, in the summer. They hunt primarily by searching through ground litter and in rock crevices. The diet of Grandidier's mongoose varies markedly between the dry and wet seasons. Whereas food consists mainly of invertebrates throughout the year, small vertebrates are the most important food by biomass, comprising 58% during the dry season and 80% during the wet season. Grandidier's mongoose weighs 1.1 to 1.3 lb (500 to 600 g). [3]

The species is sympatric with two other carnivores, the fossa ( Cryptoprocta ferox ) and the introduced Indian civet ( Viverricula indica ). However, there seems to be virtually no range or dietary overlap between these animals and Grandidier's mongoose. From sub-fossil evidence, it is clear that the region underwent drastic climatic change during the last 3000–2000 years. It is presumed that the distribution of this mongoose was notably broader and the proportion of prey types different in earlier times than today. Grandidier's mongoose must have adapted to dryer conditions, which have resulted in its very limited distribution and the exploitation of notably small prey. [3]

The animals can be vocal, with a cooing mew, and are described as sociable and playful. [2] 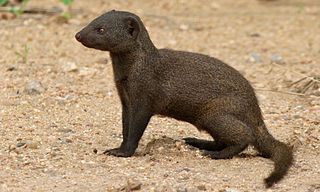 The common dwarf mongoose, sometimes just called the dwarf mongoose, is a small African carnivore belonging to the mongoose family (Herpestidae). It is part of the genus Helogale and as such related to Helogale hirtula. 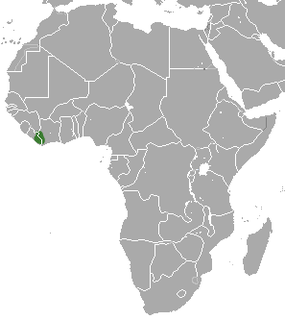 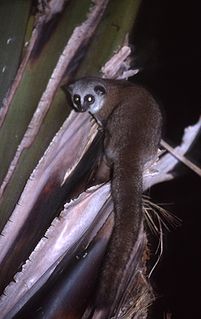 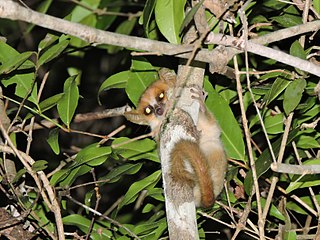 The narrow-striped mongoose is a member of the family Eupleridae, subfamily Galidiinae and endemic to Madagascar. It inhabits the Madagascar dry deciduous forests of western and southwestern Madagascar, where it lives from sea level to about 125 m (410 ft) between the Tsiribihina and Mangoky rivers. In Malagasy it is called bokiboky.

Adansonia grandidieri, sometimes known as Grandidier's baobab, is the biggest and most famous of Madagascar's six species of baobabs. This imposing and unusual tree is endemic to the island of Madagascar, where it is an endangered species threatened by the encroachment of agricultural land. 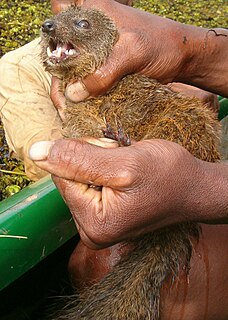