The Malayan civet (Viverra tangalunga), also known as the Malay civet and Oriental civet, is a viverrid native to the Malay Peninsula and the islands of Sumatra, Bangka, Borneo, the Riau Archipelago, and the Philippines. It is listed as "Least Concern" by IUCN as it is a relatively widely distributed, appears to be tolerant of degraded habitats, and occurs in a number of protected areas. [1]

Viverra tangalunga was the scientific name proposed by John Edward Gray in 1832 for a spotted zoological specimen. [2]

The Malay civet's tail is black above and ringed on the lower side. [3]

The historical range of the Malay civet includes Indonesia, Malaysia, Brunei, the Philippines and Singapore. In Malaysia, it occurs in Borneo, Banggi Island, Langkawi Island, Penang Island and in Peninsular Malaysia. [4] It is also known from Sumatra. [5] It was introduced to Sulawesi and the Maluku Islands. [1] Museum records indicate that the Malay civet also occurred on the Indonesian islands of Java, Bawal and Telok Pai, and on the Philippine island Leyte. [6] In 2012, an individual was photographed in Singapore. [7] The Malay civet population in the Philippines may have originated in Borneo and colonized Palawan island naturally. It possibly later dispersed to the rest of Philippines through human introduction, because land connection between Philippines islands did not exist during last glacial period. [8]

The Malay civet inhabits a wide variety of habitats including forests, secondary habitats, cultivated land and the outskirts of villages. [9] They range in elevations of up to 900 m (3,000 ft) on Gunung Madalan in Sabah and 1,100 m (3,600 ft) on Usun Apau and the Kelabit Upland in Sarawak.[ citation needed ]

As a ground-living species it is exposed to snaring and other forms of ground-level trapping, and hunting with dogs. The limited survey in areas heavily used by people suggests it is rather well able to persist at general levels of threat. The species is occasionally hunted for food and treated as a pest as it raids poultry. [1]

In Borneo, the Malayan civet is negatively affected by the effects of timber harvesting. [13]

Viverra tangalunga is protected in Malaysia under the Wildlife Protection Act (WPA) of 1972. [1] However, in many rural areas of Peninsular Malaysia civets are considered a pest because they prey on small livestock and raid fruit orchards. Section 55 of the WPA of 1972 allows farmers to shoot any wild animal that causes damage to their property, as long as reasonable efforts have been made to frighten the animal away. [14]

Viverridae is a family of small to medium-sized mammals, the viverrids, comprising 15 genera, which are subdivided into 38 species. This family was named and first described by John Edward Gray in 1821. Viverrids are found in South and Southeast Asia, across the Wallace Line, all over Africa, and into southern Europe. Their occurrence in Sulawesi and in some of the adjoining islands shows them to be ancient inhabitants of the Old World tropics.

The Asian palm civet is a viverrid native to South and Southeast Asia. Since 2008, it is IUCN Red Listed as Least Concern as it accommodates to a broad range of habitats. It is widely distributed with large populations that in 2008 were thought unlikely to be declining. In Indonesia, it is threatened by poaching and illegal wildlife trade; buyers use it for the increasing production of kopi luwak.

The sun bear is a species in the family Ursidae occurring in the tropical forests of Southeast Asia. It is the smallest bear, standing nearly 70 cm (28 in) at the shoulder and weighing 25–65 kg (55–143 lb). It is stockily built, with large paws, strongly curved claws, small rounded ears and a short snout. The fur is generally jet-black, but can vary from grey to red. Sun bears get their name from the characteristic orange to cream coloured chest patch. Its unique morphology—inward-turned front feet, flattened chest, powerful forelimbs with large claws—suggests adaptations for climbing. 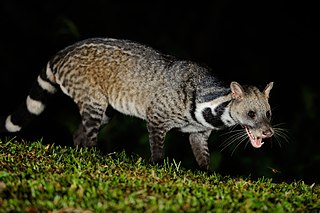 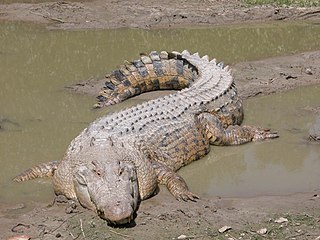 The wildlife of Malaysia is diverse, with Malaysia being a megadiverse country. Most of the country is covered in rainforest, which hosts a huge diversity of plant and animal species. There are approximately 361 mammal species, 694 bird species, 250 reptile species and 150 frog species found in Malaysia. Its large marine territory also holds a great diversity of life, with the country's coastal waters comprising part of the Coral Triangle. 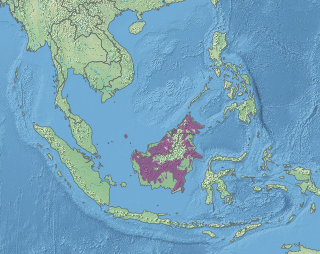 Wong Siew Te is a Malaysian wildlife biologist known for his studies on the Malayan sun bear and the foundation of the Bornean Sun Bear Conservation Centre in Sandakan, Sabah.