The crab-eating mongoose (Herpestes urva) is a mongoose species ranging from the northeastern Indian subcontinent and Southeast Asia to southern China and Taiwan. It is listed as Least Concern on the IUCN Red List. [1]

Gulo urva was the scientific name proposed by Brian Houghton Hodgson in 1836 who first described the type specimen that originated in central Nepal. It is locally called 'urva'. [3]

The crab-eating mongoose occurs in northeastern India, northern Myanmar, Thailand, Peninsular Malaysia, Laos, Cambodia, and Vietnam. It is rare in Bangladesh. It has been recorded at altitudes from sea level to 1,800 m (5,900 ft). [1]

In Nepal, it inhabits subtropical evergreen and moist deciduous forests, and has also been observed on agricultural land near human settlements. [5] In India, it was recorded in Assam and Arunachal Pradesh. [6] [7] In Bangladesh, it was recorded in the eastern forested hills in Sylhet and Chittagong areas. [4] In Myanmar, it was recorded in the Bumhpa Bum hills at up to 930 m (3,050 ft) altitude, in Hukawng Valley, Alaungdaw Kathapa National Park, Bago Yoma and Myinmoletkat Taung during surveys between 2001 and 2003. [8] In China's Guangxi, Guangdong and Hainan provinces, it was recorded in subtropical limestone forest during interview and camera-trapping surveys carried out between 1997 and 2005. [9]

Crab-eating mongooses are usually active in the mornings and evenings, and were observed in groups of up to four individuals. They are supposed to be good swimmers, and hunt along the banks of streams and close to water. [4]

Despite their common name, their diet consists not only of crabs, but also just about anything else they can catch, including fish, snails, frogs, rodents, birds, reptiles, and insects. [5] 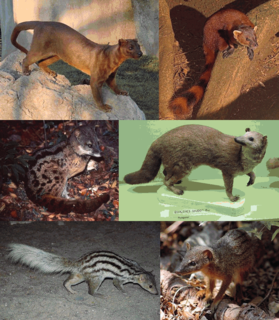 The Javan mongoose is a mongoose species native to South and Southeast Asia that has also been introduced to many regions of the world.

Panlaung and Padalin Cave Wildlife Sanctuary is a protected area in Myanmar's Shan State, stretching over an area of 333.8 km2 (128.9 sq mi). It was established in 2002. In elevation, it ranges from 150 to 1,555 m covering mixed deciduous and dipterocarp forest.