Papua New Guinea, officially the Independent State of Papua New Guinea is a country in Oceania that occupies the eastern half of the island of New Guinea and its offshore islands in Melanesia, a region of the southwestern Pacific Ocean north of Australia. Its capital, located along its southeastern coast, is Port Moresby. The western half of New Guinea forms the Indonesian provinces of Papua and West Papua. It is the world's 3rd largest island country with 462,840 km2 (178,700 sq mi).

Sir Michael Thomas Somare is a Papua New Guinean politician. He was a pivotal politician in the coming of independence. His political career spanned from 1968 until his retirement in 2017. He has been the longest serving prime minister. Besides that he has been minister of foreign affairs, leader of the opposition and governor of East Sepik.

Although English is an official language of Papua New Guinea, it is only spoken by 1–2% of the population. [4]

Tok Pisin is an English-based creole language spoken throughout Papua New Guinea. It is an official language of Papua New Guinea and the most widely used language in the country. In parts of Western, Gulf, Central, Oro and Milne Bay provinces, however, the use of Tok Pisin has a shorter history, and is less universal especially among older people.[ citation needed ] 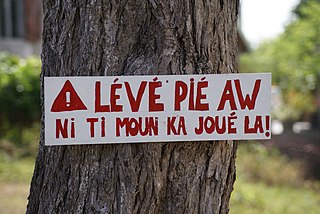 A creole language, or simply creole, is a stable natural language that develops from the simplifying and mixing of different languages within a fairly brief period of time: often, a pidgin transitioned into a full-fledged language. While the concept is similar to that of a mixed or hybrid language, creoles are often characterized by a tendency to systematize their lexifer. Like any language, creoles are characterized by consistent system of grammar, possess large stable vocabularies, and are acquired by children as their native language. These three features distinguish a creole language from a pidgin. 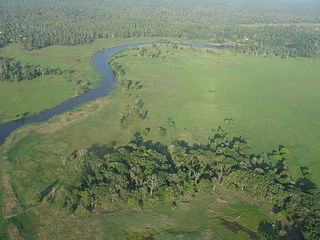 Western Province is a coastal province in southwestern Papua New Guinea, bordering the Indonesian province of Papua. The provincial capital is Daru. The largest town in the province is Tabubil. Other major settlements are Kiunga, Ningerum, Olsobip and Balimo.

Hiri Motu, also known as Police Motu, Pidgin Motu, or just Hiri, is a simplified version of the Motu language of the Austronesian language family.

Motu is a Central Papuan Tip language that is spoken by the Motuans, an indigenous ethnic group of Papua New Guinea. It is commonly used today in the region, particularly around the capital, Port Moresby.

Unserdeutsch, or Rabaul Creole German, is a German-based creole language spoken mainly in East New Britain Province. It is the only creole language that has developed from colonial German. The lexicon is derived from German, while the substrate language is Tok Pisin. [5] 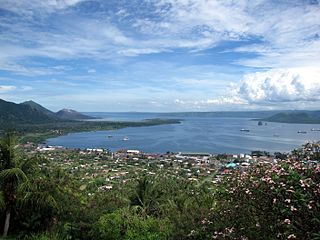 Rabaul is a township in East New Britain province, on the island of New Britain, in the country of Papua New Guinea. It lies about 600 kilometres to the east of the island of New Guinea. Rabaul was the provincial capital and most important settlement in the province until it was destroyed in 1994 by falling ash from a volcanic eruption in its harbor.

East New Britain is a province of Papua New Guinea, consisting of the north-eastern part of the island of New Britain and the Duke of York Islands. The capital of the province is Kokopo, not far from the old capital of Rabaul, which was largely destroyed in a volcanic eruption in 1994. East New Britain covers a total land area of 15,816 square kilometres (6,107 sq mi), and the province's population was reported as 220,133 in the 2000 census, rising to 328,369 in the 2011 count. Provincial coastal waters extend over an area of 104,000 square metres. The province's only land border is with West New Britain Province to the west, and it also shares a maritime border with New Ireland Province to the east.

Outside Papua New Guinea, Papuan languages that are also spoken include the languages of Indonesia, East Timor, and the Solomon Islands.

East Timor or Timor-Leste, officially the Democratic Republic of Timor-Leste, is a country in Maritime Southeast Asia. It comprises the eastern half of the island of Timor, the nearby islands of Atauro and Jaco, and Oecusse, an exclave on the northwestern side of the island surrounded by Indonesian West Timor. Australia is the country's southern neighbour, separated by the Timor Sea. The country's size is about 15,007 km2.

The Austronesian languages are widely spread across the globe, as far west as Malagasy in Madagascar, as far east as Rapa Nui on Easter Island, and as far as north as the Formosan languages of Taiwan. Austronesian has several primary branches, all but one of which are found exclusively on Taiwan.[ citation needed ]

PNGSL is an official language of Papua New Guinea; it is based on Auslan and various home sign forms.

A pidgin, or pidgin language, is a grammatically simplified means of communication that develops between two or more groups that do not have a language in common: typically, its vocabulary and grammar are limited and often drawn from several languages. It is most commonly employed in situations such as trade, or where both groups speak languages different from the language of the country in which they reside. Fundamentally, a pidgin is a simplified means of linguistic communication, as it is constructed impromptu, or by convention, between individuals or groups of people. A pidgin is not the native language of any speech community, but is instead learned as a second language.

Tok Pisin is a creole language spoken throughout Papua New Guinea. It is an official language of Papua New Guinea and the most widely used language in the country. However, in parts of Western, Gulf, Central, Oro Province and Milne Bay Provinces, the use of Tok Pisin has a shorter history, and is less universal, especially among older people. While it likely developed as a trade pidgin, Tok Pisin has become a distinct language in its own right. It is often referred to by Anglophones as "New Guinea Pidgin" or "Pidgin English".

Portuguese creoles are creole languages which have Portuguese as their substantial lexifier. The most widely-spoken creole influenced by Portuguese is the Cape Verdean Creole. 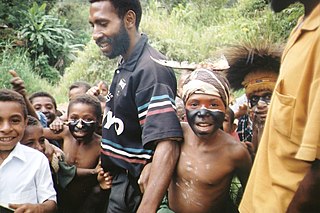 The indigenous peoples of New Guinea, commonly called Papuans, are Melanesians. There is genetic evidence for two major historical lineages in New Guinea and neighboring islands:

Unserdeutsch, or Rabaul Creole German, is a German-based creole language that originated in Papua New Guinea as a lingua franca. The substrate language is assumed to be Tok Pisin, while the majority of the lexicon is from German. German was the language of instruction in Catholic mission schools, which is where the language originated, and children residing in a German-run orphanage later used the language regularly outside of their classrooms. The language developed into a first language for some when these children had families of their own. Oral stories tell a version that Unserdeutsch originated by children sharing stories where they used German vocabulary with Tok Pisin grammar, this change in language is referred to as relexification.

The Tolai language, or Kuanua, is spoken by the Tolai people of Papua New Guinea, who live on the Gazelle Peninsula in East New Britain Province.

Vitu or Muduapa is an Oceanic language spoken by about 7,000 people on the islands northwest of the coast of West New Britain in Papua New Guinea.

Samoan Plantation Pidgin is an English-based pidgin language that was spoken by plantation workers in Samoa. It is closely related to Tok Pisin, due to the large number of New Guinean laborers in Samoa.