The Togian babirusa (Babyrousa togeanensis), also known as the Malenge babirusa, [2] [3] is the largest species of babirusa. It is endemic to the Togian Islands of Indonesia, but was considered a subspecies of Babyrousa babyrussa until 2002. [1] Compared to the better-known north Sulawesi babirusa, the Togian babirusa is larger, has a well-developed tail-tuft, and the upper canines of the male are relatively "short, slender, rotated forwards, and always converge". [4] [5] The Togian babirusa is omnivorous, feeding mainly on roots and fallen fruit but also worms and invertebrates. [6] Unlike other pig species, the Togian babirusa does not root at the ground with its snout when foraging, but instead can be seen pawing at the ground to uproot plants. [7] 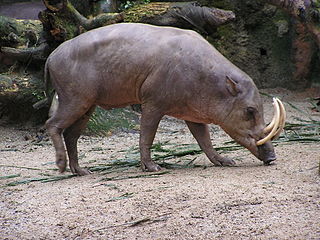 The babirusas, also called deer-pigs, are a genus, Babyrousa, in the swine family found in the Indonesian islands of Sulawesi, Togian, Sula and Buru. All members of this genus were considered part of a single species until 2002, the babirusa, B. babyrussa, but following that was split into several species. This scientific name is restricted to the Buru babirusa from Buru and Sula, whereas the best-known species, the north Sulawesi babirusa, is named B. celebensis. The remarkable "prehistoric" appearance of these mammals is largely due to the prominent upwards incurving canine tusks of the males, which actually pierce the flesh in the snout. 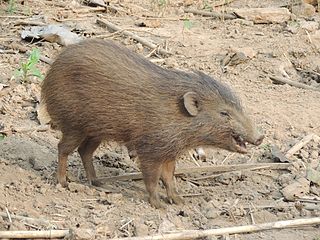 The pygmy hog is a suid native to alluvial grasslands in the foothills of the Himalayas at elevations of up to 300 m (980 ft). Today, the only known population lives in Assam, India and possibly southern Bhutan. As the population is estimated at less than 250 mature individuals, it is listed as Endangered on the IUCN Red List. 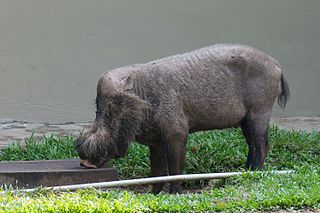 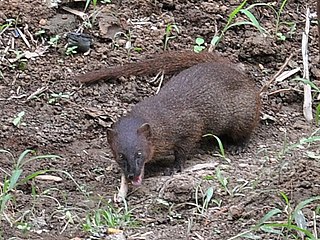 The Javan mongoose is a mongoose species native to Southeast Asia. 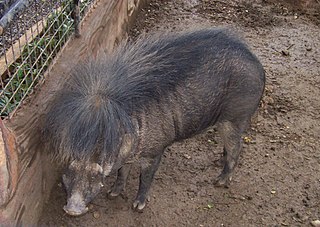 Bogani Nani Wartabone National Park is a 2,871 km2 (1,108 mi2) National Park on Minahassa Peninsula on Sulawesi island, Indonesia. Formerly known as Dumoga Bone National Park, it was established in 1991 and was renamed in honour of Nani Wartabone, a local resistance fighter who drove the Japanese from Gorontalo during World War II. The park has been identified by Wildlife Conservation Society as the single most important site for the conservation of Sulawesi wildlife and is home to many species endemic to Sulawesi. 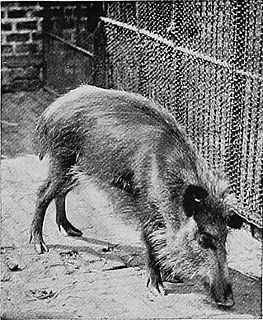 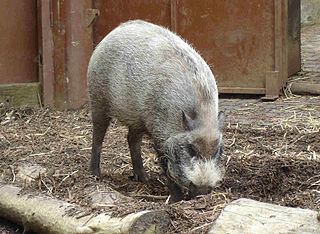 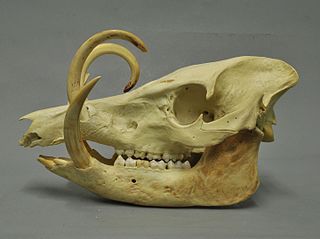 The Buru babirusa is a wild pig-like animal native to the Indonesian islands of Buru, the two Sula Islands of Mangole and Taliabu. It is also known as the Moluccan babirusa, golden babirusa or hairy babirusa. Traditionally, this relatively small species included the other babirusas as subspecies, but it has been recommended treating them as separate species based on differences in their morphology. As also suggested by its alternative common names, the Buru babirusa has relatively long thick, gold-brown body-hair – a feature not shared by the other extant babirusas. 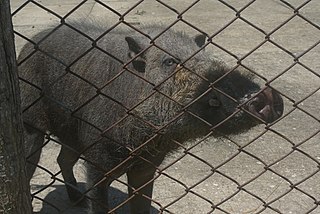 The Palawan bearded pig is a pig species in the genus Sus endemic to the Philippines, where it occurs on the archipelago of islands formed by Balabac, Palawan, and the Calamian Islands. It is 1 to 1.6 m in length, about 1 m (3.3 ft) tall and weigh up to 150 kg (330 lb).

Babyrousa bolabatuensis, the Bola Batu babirusa, is a species of babirusa from the Indonesian island of Sulawesi. It was first described in 1950 as a subspecies of Babyrousa babyrussa, then the only recognized species of babirusa, and raised to species rank by Colin Groves and Erik Meijaard in 2002. At present the Bola Batu babirusa is only known for certain from subfossil remains from the southern arm of Sulawesi. Based on a single skull from central Sulawesi it has been suggested that babirusas from this part of Sulawesi represent an extant population of the Bola Batu babirusa, and this was followed in the third edition of Mammal Species of the World. However, the most recent major review also found similarities between the central Sulawesi specimen and the Togian babirusa, leading them to conclude that it represents an undescribed taxon and that the taxonomic position of central Sulawesi babirusas only can be determined through additional specimens. Subfossil remains from the south-western arm of Sulawesi, where now likely extinct, have been classified as Bola Batu babirusas, but these were considered unclassifiable in 2002, as were extant populations from the eastern arm of Sulawesi and Buton due to the lack of specimens. Due to these uncertainties, the IUCN Red List provisionally synonymized B. bolabatuensis under the northern Sulawesi species, B. celebensis, pending clarification of the taxonomy of Sulawesi babirusas. 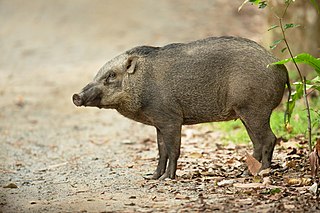 The banded pig also known as the Indonesian wild boar is a subspecies of wild boar native to the Thai-Malay Peninsula and many Indonesian islands, including Sumatra, Java, and the Lesser Sundas as far east as Komodo. It is known as the wild boar in Singapore. It is the most basal subspecies, having the smallest relative brain size, more primitive dentition, and unspecialised cranial structure. It is a short-faced subspecies with a white band on the muzzle, as well as sparse body hair, no underwool, a fairly long mane, and a broad reddish band extending from the muzzle to the sides of the neck. It is much smaller than the mainland S. s. cristatus subspecies, with the largest specimens on Komodo weighing only 48 kg. 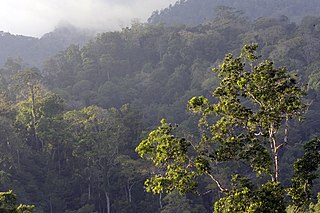 The Sulawesi montane rain forests is a tropical moist forest ecoregion in Indonesia. It includes the highlands of Sulawesi.