The water chevrotain (Hyemoschus aquaticus), also known as the fanged deer, is a small ruminant found in tropical Africa. It is the largest of the 10 species of chevrotains, basal even-toed ungulates which are similar to deer, but are barely larger than small dogs.

Unusually for most mammals, female water chevrotains are larger than males. On average, they weigh over 2 kg more than the 10-kg males. Their body length is about 85 cm, and their shoulder height is around 35 cm. Water chevrotains have a rich, sleek, red-brown coat on top, and the underside of the coat is white. On the body is a pattern of white stripes that runs horizontally from the shoulder to the tail, with vertical rows of white stripes in the back. The chin, throat, and chest are covered in very coarse hair with a pattern of white V shapes. The back end of the water chevrotain has many powerful muscles and is higher than the shoulders, which makes the body slope down toward the front. The head is held down toward the ground while walking, which allows the water chevrotain to navigate easily through thickets of dense brush. A layer of thick, reinforced skin is on the dorsal surface, which protects the back from injuries caused by the thick brush. The legs look short and thin compared to the bulky body, and the hooves are similar to a pig's. The tail is short with a fluffy white underside that resembles a cotton ball. [2]

The water chevrotain is endemic to the tropical regions of Africa. While it primarily lives in the coastal regions, the species can be found from Sierra Leone to western Uganda. [3] They can be found in closed-canopy, moist, tropical lowland forest, and within this habitat, they only occupy areas within close range to streams or rivers. The area is rarely inhabited by the species if it is further than 250 m away from water. During the day, chevrotains cannot be found outside of the dense forest, but at night, they can be observed in exposed clearings and open river banks. [2]

The water chevrotain is exclusively nocturnal, and forages for food in clearings at night. Fallen fruits, such as figs, palm nuts, and breadfruit make up the majority of the water chevrotain's diet, although it has also been known to feed on insects, crabs, and scavenged meat and fish, and is the only species of chevrotain known to do so. It relies on its sense of smell to locate food. [4] During the day, the water chevrotain hides in the dense cover of the African brush. The resting postures of the species include lying down and sitting up. Because they are such a solitary species, the interactions between water chevrotains are only antagonistic and reproductive encounters. Males fight other males, mainly over territory. Their fights are typically short, and in them the two competing males run at each other, mouths open. They poke each other with their muzzles and bite. These aggressive fights are thought to be the reason that mature males normally live no closer than several kilometers apart. The water chevrotain makes several different noises, which include a scream when injured/wounded and an alarm bark. When females fight, they make a high-pitched chattering noise, and when pursuing a female, a male makes a noise through a closed mouth. [2] 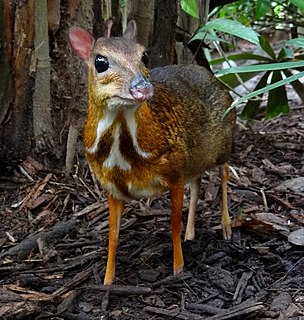 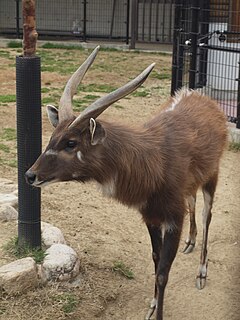 The royal antelope is a West African antelope, recognized as the world's smallest antelope. It was first described by Swedish zoologist Carl Linnaeus in 1758. It stands up to merely 25 centimetres (10 in) at the shoulder and weighs 2.5–3 kilograms (5.5–6.6 lb). A characteristic feature is the long and slender legs, with the hindlegs twice as long as the forelegs. Horns are possessed only by males; the short, smooth, spiky horns measure 2.5–3 centimetres (1.0–1.2 in) and bend backward. The soft coat is reddish to golden brown, in sharp contrast with the white ventral parts. In comparison to Bates's pygmy antelope, the royal antelope has a longer muzzle, broader lips, a smaller mouth and smaller cheek muscles. 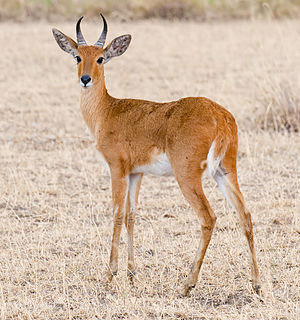 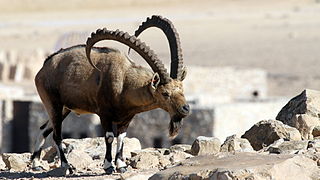 The Nubian ibex is a desert-dwelling goat species found in mountainous areas of northern and northeast Africa, and the Middle East. It was historically considered to be a subspecies of the Alpine ibex, but is now considered a distinct species. The wild population is estimated at 1,200 individuals.

The marsh deer is the largest deer species from South America reaching a length of 2 m (6.6 ft) and a shoulder height of 1.2 m (3.9 ft). It is found in Argentina, Bolivia, Peru, Brazil, Uruguay and Paraguay. Formerly found in much of tropical and subtropical South America, it ranged east of the Andes, south from the Amazon rainforest, west of the Brazilian Atlantic rainforest and north of the Argentinian Pampa. Today it is largely reduced to isolated populations at marsh and lagoon zones in the Paraná, Paraguay, Araguaia and Guapore river basins. Small populations also occur in the southern Amazon, including Peru where protected in Bahuaja-Sonene National Park. It is listed as a vulnerable species by the IUCN and on CITES Appendix I. 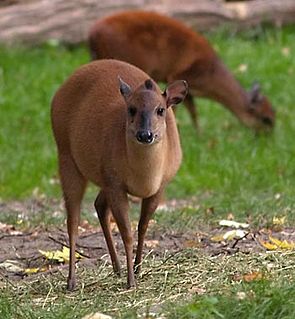 The red-fronted gazelle is widely but unevenly distributed gazelle across the middle of Africa from Senegal to northeastern Ethiopia. It is mainly resident in the Sahel zone, a narrow cross-Africa band south of the Sahara, where it prefers arid grasslands, wooded savannas and shrubby steppes. 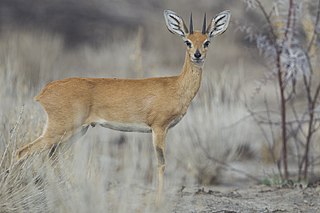 The steenbok is a common small antelope of southern and eastern Africa. It is sometimes known as the steinbuck or steinbok.

The Philippine mouse-deer, also known as the Balabac chevrotain or pilandok, is a small, nocturnal ruminant, which is endemic to Balabac and nearby smaller islands southwest of Palawan in the Philippines. The genus Tragulus means 'little goat' and the Philippine mouse-deer has been named so due to the horizontal pupils of the eyes. This position of the pupil allows for an increase in peripheral depth perception. It has traditionally been considered a subspecies of the greater mouse-deer. In 2004, though, T. nigricans was separated from T. napu as its own species due to differences in skull morphology. Contrary to its common name, the Philippine mouse-deer does not belong to the deer family Cervidae, but is a member of the chevrotain family.

The Lady Burton's rope squirrel is a species of rodent in the family Sciuridae. It is found in Cameroon, Central African Republic, Republic of the Congo, Equatorial Guinea, and Gabon. Its natural habitats are tropical and subtropical moist broadleaf forests and subtropical or tropical moist montane forest. It is a common species with a wide range, and the International Union for Conservation of Nature has rated it as being of "least concern". 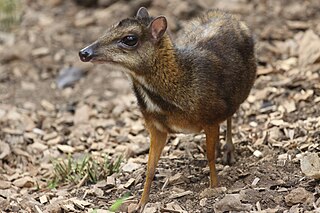 The Java mouse-deer is a species of even-toed ungulate in the family Tragulidae. When it reaches maturity it is about the size of a rabbit, making it the smallest living ungulate. It is found in forests in Java and perhaps Bali, although sightings there have not been verified. 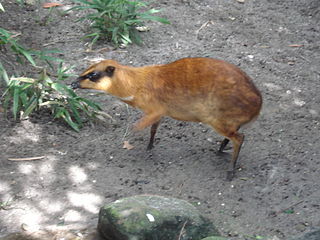 The greater mouse-deer, greater Malay chevrotain, or napu is a species of even-toed ungulate in the family Tragulidae found in Sumatra, Borneo, and smaller Malaysian and Indonesian islands, and in southern Myanmar, southern Thailand, and peninsular Malaysia. Its natural habitat is subtropical or tropical, moist, lowland forest. 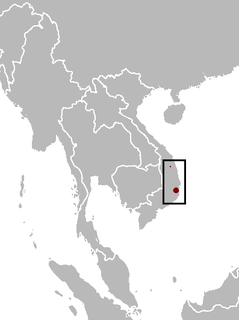 The Vietnam mouse-deer, also known as the silver-backed chevrotain, is an even-toed ungulate in the family Tragulidae known only from Vietnam. It was first described in 1910 by British zoologist Oldfield Thomas, who procured four specimens from Nha Trang in Annam. Little is known about its distribution and ecology. After 1910, the Vietnam mouse-deer was reported next in 1990 near Dak Rong and Buon Luoi in the Gia Lai Province. With increasing hunting pressure, habitat loss due to deforestation and no more reports of the species in the wild, the mouse-deer was feared to have gone extinct. The IUCN listed the species as Data Deficient in 2008. In 2019, a study confirmed the presence of the Vietnam mouse-deer in dry low-lying forests of southern Vietnam with camera trap evidence. The mouse-deer is characterised by a rough coat with a strange double-tone coloration unseen in other chevrotains; the front part of the body is reddish brown and contrasts strongly with the greyish posterior. It has big reddish brown ears, white and dark reddish brown marks on the throat.

The Mongalla gazelle is a species of gazelle found in the floodplain and savanna of South Sudan. It was first described by British zoologist Walter Rothschild in 1903. The taxonomic status of the Mongalla gazelle is widely disputed. While some authorities consider it a full-fledged monotypic species in the genus Eudorcas, it is often considered a subspecies of Thomson's gazelle, while other authorities regard it as subspecies of the red-fronted gazelle. 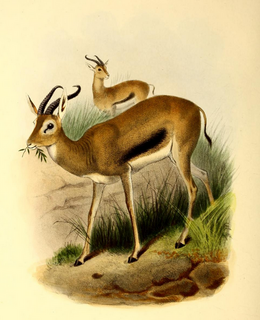 Heuglin's gazelle, also known as the Eritrean gazelle, is a species of gazelle found east of the Nile River in Eritrea, Ethiopia and Sudan. It was considered a subspecies of the red-fronted gazelle or conspecific with Thomson's gazelle and Mongalla gazelle by some authors in the past. This small gazelle stands nearly 67 cm (26 in) at the shoulder and weighs between 15 and 35 kg. The coat is dark reddish brown with a dark reddish stripe on the flanks, except for the underparts and the rump which are white. Horns, present in both sexes, measure 15 to 35 cm in length.