The marsh deer (Blastocerus dichotomus) is the largest deer species from South America reaching a length of 2 m (6.6 ft) and a shoulder height of 1.2 m (3.9 ft). It is found in Argentina, Bolivia, Peru, Brazil, Uruguay and Paraguay. Formerly found in much of tropical and subtropical South America, it ranged east of the Andes, south from the Amazon rainforest, west of the Brazilian Atlantic rainforest and north of the Argentinian Pampa. Today it is largely reduced to isolated populations at marsh and lagoon zones in the Paraná, Paraguay, Araguaia and Guapore river basins. Small populations also occur in the southern Amazon, including Peru where protected in Bahuaja-Sonene National Park. [3] [4] [5] It is listed as a vulnerable species by the IUCN and is protected under CITES Appendix I. [1]

The latter half of its scientific name refers to the forked antlers. Marsh deer resemble the North American mule deer or blacktail deer.

The hoof, which is large in relation to the body, has elastic interdigital membranes which are useful for swimming and walking on marshy surfaces. Only the males possess antlers which are ramified and reach a length of 60 cm (23 inches). An adult typically grows to a weight of 80 to 125 kg (176 to 276 lb), although an occasional big male can weigh up to 150 kg (330 lb). [7]

They are solitary animals or living in groups with less than 6 individuals with only an adult male. Their main predators are the jaguar and the puma.

The marsh deer lives only in marsh areas, notably the Pantanal and Chaco, in which the level of water is less than 70 cm (28 in) deep. They are swift swimmers. The marshes with their high vegetation density protect them from predators and provide them with food. These deer also have a small migratory pattern, they follow the water levels between the dry season and flooding season. With the fluctuation in water levels, they are able to find new food sources that the water uncovers during the dry season. Some freshwater ponds on the Pantanal Wetland, Brazil reported low densities of individuals dictating that those ponds are not able to support large populations of marsh deer. [8]

Since marsh deer live near aquatic habitats, they eat a majority of their diet in aquatic plants. A study was conducted and they found 40 different species of plants in which they ate. The main food component was Graminae which took up 22% of their diet, Pontederiaceae took up 12%, Leguminosae was about 11%, and the rest was filled in with Nymphaeaceae, Alismataceae, Marantaceae, Onagraceae, and Cyperaceae. They also enjoy eating aquatic flowers and shrubs that grow in the swamps and the floating mats. [9] They can be best classed as a grazer-browser for food. Their diet also changes between the dry season and the flood season.

Usually the rutting season coincides with the dry season but can change from animal to animal. They may use this to their advantage for breeding or finding mates because the densities of marsh deer are significantly higher on the Rio Negro marshland boundary during the dry season compared to the less dense, more distributed population during the flooded season. [8] Gestation lasts approximately 271 days. [10] The offspring (normally one per female, though occasionally twins are born) are born between October and November. The infant deer are whitish which becomes more adult-like after a year.

The natural predators of the marsh deer – the jaguar (locally called onça or yaguaraté) (Panthera onca) and the puma (Puma concolor)— have almost completely disappeared from its habitat. The former major threat was poaching for its antlers, but this is somewhat under control. Destruction of its habitat presents nowadays the major threat to marsh deer. The Yacyretá Dam altered an area in which several hundred individuals lived and the draining of marshes for farmland and cattle farming threaten hundreds of hectares every year in Argentina and Brazil. Contagious diseases from cattle are also a problem, though it has been shown that the deer is not affected by brucellosis. In October 2018, Argentina established the Ciervo de los Pantanos National Park to help protect this species. [11] 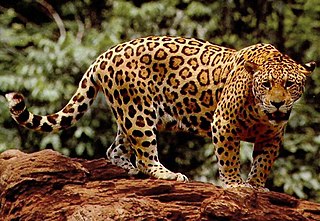 The jaguar is a large cat species and the only living member of the genus Panthera native to the Americas. With a body length of up to 1.85 m and a weight of up to 96 kg (212 lb), it is the largest cat species in the Americas and the third largest in the world. Its distinctively marked coat features pale yellow to tan colored fur covered by spots that transition to rosettes on the sides, although a melanistic black coat appears in some individuals. The jaguar's powerful bite allows it to pierce the carapaces of turtles and tortoises, and to employ an unusual killing method: it bites directly through the skull of mammalian prey between the ears to deliver a fatal blow to the brain. 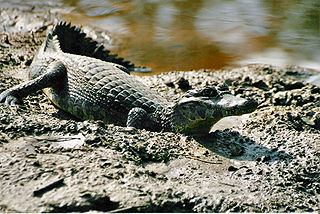 Caiman is a genus of caimans within the alligatorid subfamily Caimaninae. They inhabit Central and South America. They are relatively small sized crocodilians, with all species reaching lengths of only a few meters and weighing 6 to 40 kg on average. 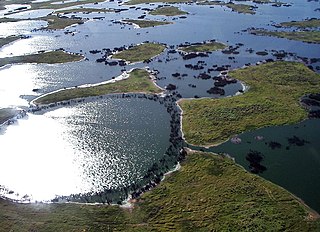 The Pantanal is a natural region encompassing the world's largest tropical wetland area, and the world's largest flooded grasslands. It is located mostly within the Brazilian state of Mato Grosso do Sul, but it extends into Mato Grosso and portions of Bolivia and Paraguay. It sprawls over an area estimated at between 140,000 and 195,000 square kilometres. Various subregional ecosystems exist, each with distinct hydrological, geological and ecological characteristics; up to 12 of them have been defined. 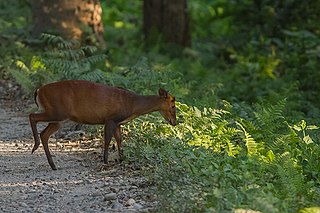 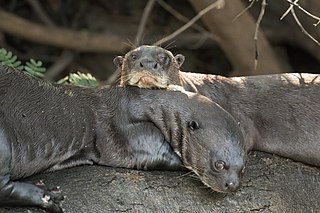 The giant otter or giant river otter (Pteronura brasiliensis) is a South American carnivorous mammal. It is the longest member of the weasel family, Mustelidae, a globally successful group of predators, reaching up to 1.7 metres (5.6 ft). Atypical of mustelids, the giant otter is a social species, with family groups typically supporting three to eight members. The groups are centered on a dominant breeding pair and are extremely cohesive and cooperative. Although generally peaceful, the species is territorial, and aggression has been observed between groups. The giant otter is diurnal, being active exclusively during daylight hours. It is the noisiest otter species, and distinct vocalizations have been documented that indicate alarm, aggression, and reassurance.

The Pampas deer is a species of deer that live in the grasslands of South America at low elevations. They are known as veado-campeiro in Portuguese and as venado or gama in Spanish. Their habitat includes water and hills, often with winter drought, and grass that is high enough to cover a standing deer. Many of them live on the Pantanal wetlands, where there are ongoing conservation efforts, and other areas of annual flooding cycles. Human activity has changed much of the original landscape. They are known to live up to 12 years in the wild, longer if captive, but are threatened due to over-hunting and habitat loss. Many people are concerned over this loss, because a healthy deer population means a healthy grassland, and a healthy grassland is home to many species, some also threatened. Many North American birds migrate south to these areas, and if the Pampas deer habitat is lost, they are afraid these bird species will also decline. There are approximately 80,000 Pampas deer total, with the majority of them living in Brazil.

The Grande Sertão Veredas National Park is a national park located on the border between the states of Minas Gerais and Bahia, Brazil.

The Ilha Grande National Park is located on the border between Paraná and Mato Grosso do Sul states in Brazil. The park was created in 1997 to protect the biological diversity of the upper Parana River area. 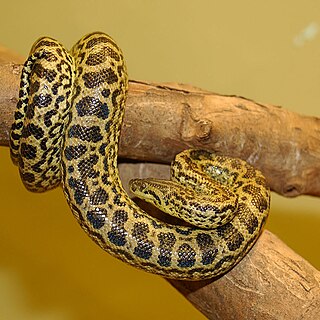 The yellow anaconda, also known as the Paraguayan anaconda, is a boa species endemic to southern South America. It is one of the largest snakes in the world but smaller than its close relative, the green anaconda. Like all boas and pythons, it is non-venomous and kills its prey by constriction. No subspecies are currently recognized.

The maguari stork is a large species of stork that inhabits seasonal wetlands over much of South America, and is very similar in appearance to the white stork; albeit slightly larger. It is the only species of its genus to occur in the New World and is one of the only three New World stork species, together with the wood stork and the jabiru. 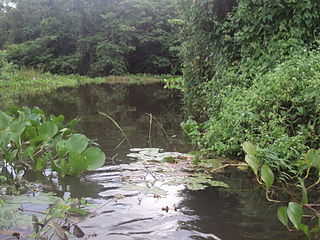 The Pantanal Matogrossense National Park is a national park in the state of Mato Grosso at the border to Mato Grosso do Sul, Brazil.

Guaporé Biological Reserve (Portuguese: Reserva Biológica do Guaporé is a biological reserve in the state of Rondônia, Brazil, on the border with Bolivia.

Taiamã Ecological Station is an ecological station in the Mato Grosso state of Brazil.

The Rio do Peixe is a river of São Paulo state in southeastern Brazil. It is a left tributary of the Paraná River.