Until the 1970s, Cervus also included the members of the genera Axis , Dama , and Elaphurus , and until the late 1980s, it included members of Rucervus and Rusa . [1]

In the third edition of Mammal Species of the World from 2005, only the red deer (C. elaphus) and sika deer (C. nippon) were recognized as species in the genus Cervus. [1] Genetic and morphological evidence suggest more species should be recognized. [2] [3] For example, the species Cervus canadensis (elk/wapiti) is considered a separate species. [4]

Others members of the red deer group, which may represent separate species, are C. corsicanus , C. wallichi and C. xanthopygus . [2] [3] If so, C. corsicanus includes the subspecies C. c. barbarus (perhaps a synonym of corsicanus), and is restricted to Maghreb in North Africa, Corsica and Sardinia. [2] [4] C. wallichi would probably include the subspecies C. w. kansuensis and C. w. macneilli (both are perhaps synonyms of C. w. wallichi), and would be found from Tibet to central China. [2] [4] [8] C. xanthopygus would probably include the subspecies C. x. alashanicus (perhaps a synonym of C. x. xanthopygus), and would be found from the Russian Far East to northeastern China. [2] [4] [8] This would restrict the "true" red deer (C. elaphus) to Europe, Anatolia, the Caucasus and northwestern Iran, and the elk/wapiti (C. canadensis) to North America and the Asian regions of the Tian Shan, Altai, and Great Khingan. [2] Alternatively, the barbarus group species are subspecies of the "true" red deer, while the C. wallichii and C. xanthopygus groups are subspecies of the elk/wapiti. [4]

It has been proposed that the sika deer should be split into four species based on genetics, morphology and voice, [3] although this may be premature based on the presently available evidence. [9] If split, the potential species are C. yesoensis from northern and central Japan (Hokkaido and northern and central Honshu), C. nippon of southern Japan (southern Honshu, Shikoku, Kyushu, Okinawa, Tsushima and other small islands), C. hortulorum of mainland Asia (the Russian Far East, Korea, central and eastern China and northern Vietnam), and C. taiouanus of Taiwan. [3]

Members of the genus Cervus have polygynous mating systems within harems. [10] These harems consist of several males, numerous females and their young offspring 1–3 years in age [11] Members of this genus have a yearly breeding season where they display sensory exploitation, intrasexual competition, and weaponry. Females will fight for optimal mating opportunities and sexually selection for males with larger antler size and/or greater roar quality. [12] The degree of polygyny and female aggregation is dependent on the level of food distribution. Females aggregating in areas with more food leading to larger harems [13] Female distribution influences the level of polygyny.

Female-female competition has been observed within harems in the red deer species (Cervus elaphus) prior to and during the mating season. Aggression is displayed through nose threats, kicking, and displacements. Elevated aggression has only been observed during the breeding season. Competition can be for access to mates or reproductive resources such as food, or nesting areas. [12] Female-female aggression in ungulates is often overlooked because it is not as extravagant as male antler combat. Female conflicts occur so the winner has first access to the harem male at the start of the mating season before he is exhausted or low on sperm storage. [12]

While an emphasis in observations of sexual selection is placed on combat using antlers, males with higher roaring rates are also being selected for. During the breeding season males will make calls to attract mates and compete with other males. Like antler size, mating call quality is an indicator of mate potential. Red deer can distinguish the calls of the males in their harem, others and their offspring. [14]

Females select for males with larger antlers which indirectly benefits them. Large antler size in males is a sign of health and strength. The visual display is a reliable indicator of mate quality, providing indirect benefits. The females are not directly affected by these characteristics, but they will produce more viable and fit offspring. Males with large antlers mate and sire more offspring than smaller, younger males. Large antler size is correlated with overall health, fitness and an increase in sperm production and quality. [10] 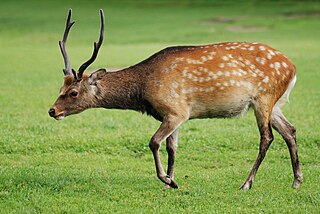 A bachelor herd is a herd of (usually) juvenile male animals who are still sexually immature or 'harem'-forming animals who have been thrown out of their parent groups but not yet formed a new family group. It may also refer to a group of males who are not currently territorial or mating with females.

The rut is the mating season of certain mammals, which includes ruminants such as deer, sheep, camels, goats, pronghorns, bison, giraffes and antelopes, and extends to others such as skunks and elephants. The rut is characterized in males by an increase in testosterone, exaggerated sexual dimorphisms and increased aggression and interest in females. The males of the species may mark themselves with mud, undergo physiological changes or perform characteristic displays in order to make themselves more visually appealing to the females. Males also use olfaction to entice females to mate using secretions from glands and soaking in their own urine. 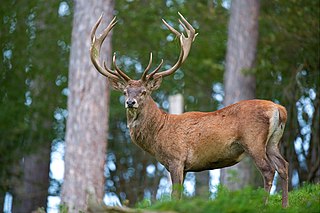 The Irish elk, also called the giant deer or Irish deer, is an extinct species of deer in the genus Megaloceros and is one of the largest deer that ever lived. Its range extended across Eurasia during the Pleistocene, from Ireland to Lake Baikal in Siberia. The most recent remains of the species have been carbon dated to about 7,700 years ago in western Russia.

The chital, also known as spotted deer, chital deer, and axis deer, is a deer species native to the Indian subcontinent. It was first described by German naturalist Johann Christian Polycarp Erxleben in 1777. A moderate-sized deer, male chital reach nearly 90 cm (35 in) and females 70 cm (28 in) at the shoulder. While males weigh 30–75 kg (66–165 lb), the lighter females weigh 25–45 kg (55–99 lb). It is sexually dimorphic; males are larger than females, and antlers are present only on males. The upper parts are golden to rufous, completely covered in white spots. The abdomen, rump, throat, insides of legs, ears, and tail are all white. The antlers, three-pronged, are nearly 1 m long. 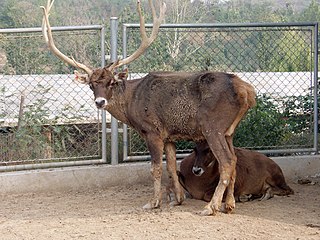 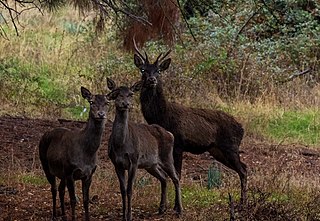 The Barbary stag, also known as the Atlas deer or African elk, is a subspecies of the red deer that is native to North Africa. It is the only deer known to be native to Africa, aside from Megaceroides algericus, which went extinct approximately 6,000 years ago.

The Yarkand deer, also known as the Theenivs deer, Tarim deer, or Lop Nor stag, is a subspecies of the Central Asian red deer that is native to the province of Xinjiang, China. It is similar in ecology to the related Bactrian deer in occupying lowland riparian corridors surrounded by deserts. Both populations are isolated from one another by the Tian Shan Mountains and probably form a primordial subgroup of the Central Asian red deer. 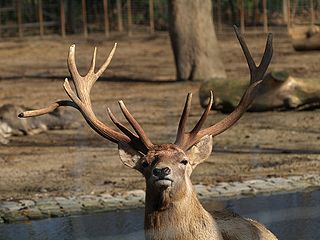 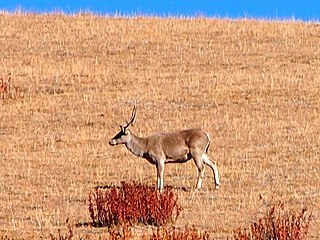 The Tibetan red deer also known as shou, is a subspecies of elk (wapiti) native to the southern Tibetan highlands and Bhutan. Once believed to be near-extinct, its population has increased to over 8,300, the majority of which live in a 120,000-hectare nature reserve established in 1993 in Riwoqê County, Qamdo Prefecture, Tibet Autonomous Region, China. Some have been kept at the beginning of the 20th century in London, and in a small zoo south of Lhasa. 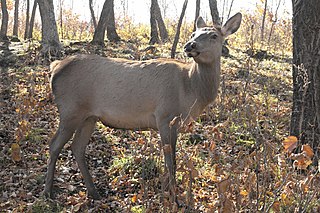 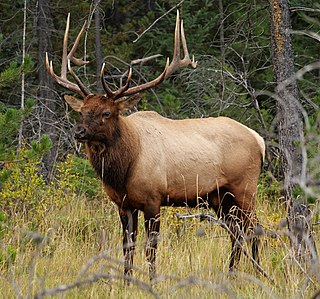 The elk, also known as the wapiti, is one of the largest species within the deer family, Cervidae, and one of the largest terrestrial mammals in its native range of North America, as well as Central and East Asia. It is often confused with the larger Alces alces, which is called moose in North America, but called elk in British English, and related names in other European languages. The name "wapiti" is used in Europe for Cervus canadensis. It originates from the Shawnee and Cree word waapiti, meaning 'white rump'. 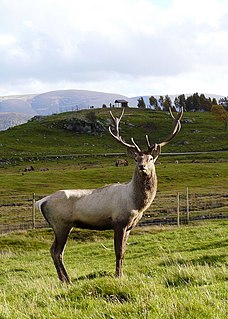 The Central Asian red deer is a deer species native to Central Asia, where it used to be widely distributed, but is scattered today with small population units in several countries. It has been listed as Least Concern on the IUCN Red List since 2017. It was first described in the mid-19th century.

The Corsican red deer, also known simply as the Corsican deer or Sardinian deer, is a subspecies of the red deer, endemic to the Mediterranean islands of Sardinia (Italy) and Corsica (France).