Alexander's kusimanse (Crossarchus alexandri) is a genus of mongoose found in the Democratic Republic of Congo and Uganda. [1]

Mongoose is the popular English name for 29 of the 34 species in the 14 genera of the family Herpestidae, which are small feliform carnivorans native to southern Eurasia and mainland Africa. The other five species in the family are the four kusimanses in the genus Crossarchus, and the species Suricata suricatta, commonly called meerkat in English.

Uganda, officially the Republic of Uganda, is a country in East-Central Africa. It is bordered to the east by Kenya, to the north by South Sudan, to the west by the Democratic Republic of the Congo, to the south-west by Rwanda, and to the south by Tanzania. The southern part of the country includes a substantial portion of Lake Victoria, shared with Kenya and Tanzania. Uganda is in the African Great Lakes region. Uganda also lies within the Nile basin, and has a varied but generally a modified equatorial climate.

It is known to share range with the Angolan kusimanse (Crossarchus ansorgei). It feeds on grubs, small rodents, small reptiles, crabs, and some fruits. It can produce 2 to 3 litters (2 to 4 young per litter) of young each year after a gestation period of 8 weeks. The young wean at 3 weeks old and reach sexual maturity at 9 months old.

The golden or Syrian hamster is a rodent belonging to the hamster subfamily, Cricetinae. Their natural geographical range is limited to arid areas of northern Syria and southern Turkey. Their numbers have been declining in the wild due to a loss of habitat from agriculture and deliberate elimination by humans. Thus, wild golden hamsters are now considered vulnerable by the International Union for Conservation of Nature.

The Townsend's mole is a fossorial mammal in the family Talpidae, and is the largest North American mole. 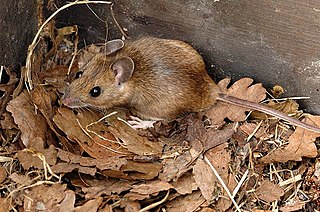 The common kusimanse, also known as the long-nosed kusimanse or cusimanse, is a small, diurnal kusimanse or dwarf mongoose. Of three subfamilies of Herpestidae, the kusimanse is a member of Mungotinae, which are small and very social. 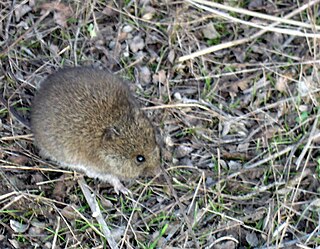 The western harvest mouse is a small neotomine mouse native to most of the western United States. Many authorities consider the endangered salt marsh harvest mouse to be a subspecies, but the two are now usually treated separately.

The Julia Creek dunnart is a marsupial with a buffy brown upperside and white underside. This dunnart has a body length of 100–135 mm with a tail of 60–105 mm to make a total length of 160–240 mm. Its weight is between 40 and 70 g. The length of the hind foot is 22–24 mm. The species has a dark brown triangle colour from above and below the eye with the point at the nose, and another dark stripe on top of the skull. A healthy dunnart has a carrot-shaped tail filled with fat stores. 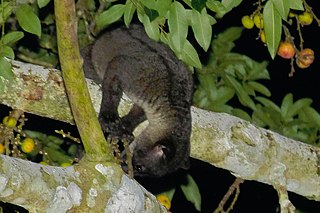 The small-toothed palm civet, also known as the three-striped palm civet, is a palm civet. It lives in dense forests of southeast Asia, from the Assam district of India to Indochina and the Malay Peninsula and on Sumatra, Bangka, Java, Borneo, and numerous small nearby islands of Indonesia.

The flat-headed kusimanse is a dwarf mongoose endemic to Benin, Cameroon and Nigeria. This species was once regarded as a subspecies of the common kusimanse.

The greater guinea pig is a species of rodent found in the coastal strip of Brazil and Uruguay, where it lives in moist grassland and marshes.

Laxmann's shrew, or the masked shrew, is a species of shrew. Its range extends from northern Scandinavia and the Baltic to the Sea of Japan, including Hokkaidō, Sakhalin, and the Korean Peninsula. It favours mountain forests but is sometimes found in tundra and moorland, and also in lowland areas as well. It avoids cultivated land.

The Siberian large-toothed shrew is a species of shrew. An adult Siberian large-toothed shrew has a weight of 4.6-6.0 grams and a body length of 5.5-6.4 centimeters, with a tail of 2.4-3.75 centimeters. This species is found across Northeast Asia, from Mongolia through northeastern China to the Russian Far East and the Paektusan region of North Korea.

The slender shrew is a species of shrew. An adult slender shrew has a weight of 1.5-5.3 grams and a body length of 4.7-6.0 centimeters, with a tail of 4-5 centimeters; this makes it one of the smaller shrews found in its range. It is distributed across northeastern North Korea, Hokkaidō, and the Russian Far East including the Kuril Islands.

The moon striped mouse or Ruwenzori hybomys is a species of rodent in the family Muridae. It is found in Democratic Republic of the Congo, Rwanda, and Uganda. Its natural habitat is subtropical or tropical moist montane forests. It is threatened by habitat loss.

The Florida mouse is a species of rodent in the family Cricetidae. It is the only species in the genus Podomys, which is the only mammal genus endemic to Florida. The Florida mouse is found only in a limited area in central peninsular Florida and in one small area in the Florida panhandle. The mouse inhabits some of Florida's hottest and driest areas in the high pinelands, sandhills, flatlands, and coastal scrub.

The thick-tailed pygmy jerboa is a species of rodent in the family Dipodidae. It is found in China, Kazakhstan, and Mongolia. Its natural habitats are temperate grassland and temperate desert. It is threatened by habitat loss. It is listed by the IUCN as being "least concern".

The bicolored shrew or bicoloured white-toothed shrew is a species of mammal in the family Soricidae. It is found in eastern, central and southern Europe and in western Asia. It is a nocturnal species and feeds on insects and other small creatures. Several litters of young are born during the warmer months of the year in a nest of dry grasses in a concealed location.