The Klimov RD-500 was an unlicensed Soviet copy of the Rolls-Royce Derwent V turbojet that was sold to the Soviet Union in 1947. The Klimov OKB adapted it for Soviet production methods and materials.

Producing metric drawings and analyzing the materials used in the Derwent V went fairly quickly, but finding a substitute for the high-temperature, creep-resistant Nimonic 80 nickel-chromium alloy [1] was a more difficult challenge. Eventually an alloy that matched Nimonic 80's high-temperature properties was found in KhN 80T, but it was not creep-resistant. The first Derwent V copy, designated as the RD-500 (Reaktivnyy Dvigatel' — jet engine) after Factory No. 500 where the engine was first produced, was being tested on 31 December 1947, but problems cropped up quickly. Combustion was uneven and this cracked the combustion chambers. This may have had something to do with the modifications made by the Soviets to the fuel, speed, and starter systems. But these problems were resolved by September 1948 when the engine passed its 100-hour State acceptance test. [2]

RD-500 was a close copy of the Derwent with a single-stage centrifugal compressor, nine combustion chambers, and a single-stage turbine. It matched the Derwent's thrust of 15.9 kN (3,570 lbf) and was only 13.7 kg (30 lb) heavier. The main problem with the engine in service was with its turbine blades, 30% of which failed inspection due to recrystallization after casting. The poor creep resistance of the KhN 80T alloy resulted in dangerous elongation of the turbine blades. Up to 40% of the early production RD-500s had to be individually adjusted before delivery and the service life of the engine never approached the 100 hours demonstrated in the acceptance test. [2]

The RD-500 was copied and developed further in the People's Republic of China (PRC) at the Shenyang Aircraft Development Office PF-1A. 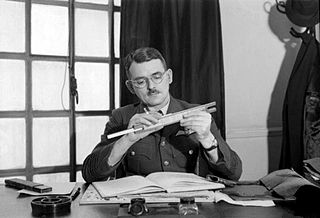 The turbojet is an airbreathing jet engine, typically used in aircraft. It consists of a gas turbine with a propelling nozzle. The gas turbine has an air inlet, a compressor, a combustion chamber, and a turbine. The compressed air from the compressor is heated by burning fuel in the combustion chamber and then allowed to expand through the turbine. The turbine exhaust is then expanded in the propelling nozzle where it is accelerated to high speed to provide thrust. Two engineers, Frank Whittle in the United Kingdom and Hans von Ohain in Germany, developed the concept independently into practical engines during the late 1930s. 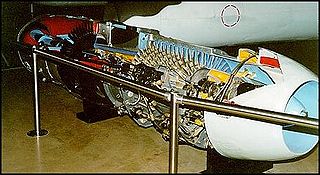 The Junkers Jumo 004 was the world's first production turbojet engine in operational use, and the first successful axial compressor turbojet engine. Some 8,000 units were manufactured by Junkers in Germany late in World War II, powering the Messerschmitt Me 262 fighter and the Arado Ar 234 reconnaissance/bomber, along with prototypes, including the Horten Ho 229. Variants and copies of the engine were produced in Eastern Europe and the USSR for several years following the end of WWII.

The Lavochkin La-15, was an early Soviet jet fighter and a contemporary of the Mikoyan-Gurevich MiG-15.

The Rolls-Royce RB.41 Nene is a 1940s British centrifugal compressor turbojet engine. The Nene was a complete redesign, rather than a scaled-up Rolls-Royce Derwent with a design target of 5,000 lbf, making it the most powerful engine of its era. It was Rolls-Royce's third jet engine to enter production, and first ran less than 6 months from the start of design. It was named after the River Nene in keeping with the company's tradition of naming its jet engines after rivers.

The Yakovlev Yak-23 was an early Soviet jet fighter with a straight wing. It was developed from the Yak-17 in the late 1940s and used a reverse-engineered copy of a British engine. It was not built in large numbers as it was inferior in performance to the swept-wing Mikoyan-Gurevich MiG-15. Many Yak-23s were exported to the Warsaw Pact nations and remained in service for most of the 1950s, although some were still in use a decade later.

The Yakovlev Yak-19 was a prototype Soviet fighter built in late 1940s. It was the first Soviet aircraft to be equipped with an afterburning turbojet, the Klimov RD-10F that was derived from the German Jumo 004 engine. Only two examples were built as it was rejected for service by the Soviet Air Force.

The Rolls-Royce RB.23 Welland was Britain's first production jet engine. It entered production in 1943 for the Gloster Meteor. The name Welland is taken from the River Welland, in keeping with the Rolls-Royce policy of naming early jet engines after rivers based on the idea of continuous flow, air through the engine and water in a river.

The de Havilland Goblin, originally designated as the Halford H-1, is an early turbojet engine designed by Frank Halford and built by de Havilland. The Goblin was the second British jet engine to fly, after Whittle's Power Jets W.1, and the first to pass a type test and receive a type certificate issued for an aircraft propulsion turbine.

The Tumansky R-11 was a Soviet Cold War-era turbojet engine.

The Klimov VK-1 was the first Soviet jet engine to see significant production. It was developed by Vladimir Yakovlevich Klimov and first produced by the GAZ 116 works. Derived from the Rolls-Royce Nene, the engine was also built under licence in China as the Wopen WP-5.

The Yakovlev Yak-25 was a Soviet military aircraft, an early turbojet-powered fighter aircraft designed by the Yakovlev OKB. The designation was later reused for a different interceptor design. Tasked by the Council of Ministers in a directive issued on 11 March 1947, with producing a straight winged fighter similar to the earlier Yak-19, but powered by a Rolls-Royce Derwent V, OKB-115 swiftly produced the Yak-25, which blazed several trails as the first Soviet fighter with a fully pressurised cockpit, air conditioning, jettisonable canopy, and hydraulic airbrakes on the fuselage amongst other innovations.

The Yakovlev Yak-30 was an experimental Soviet interceptor from the late 1940s. Derived from the Yak-25, from which it differed primarily in having wings sweptback 35° at quarter chord, the Yak-30 retained the fuselage, tail surfaces and undercarriage of the earlier fighter.

Yakovlev Yak-50 was an early experimental turbojet interceptor aircraft designed in 1948 by the Yakovlev OKB in the USSR. The aircraft was essentially a stretched version of the Yakovlev Yak-30 (1948), with a more powerful engine and greater wing sweep. The Yak-50 is perhaps most significant as the first Yakovlev aircraft equipped with velosipednoye (bicycle) landing gear, a trademark of later Yakovlev designs. The Yak-50 designation was later reused for a propeller-driven aerobatic and trainer aircraft. 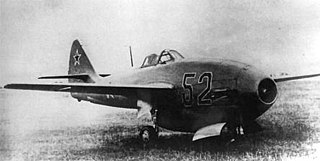 The Lavochkin La-152,, and its variants, was a jet fighter prototype designed and manufactured by the Lavochkin Design Bureau (OKB) shortly after the end of World War II. Derived from the Lavochkin La-150, the 152 used several different engines, but the program was canceled as other fighters with more powerful engines and swept wings showed more promise.

The Lavochkin La-168 was a jet fighter developed for the USSR. Like the better known Mikoyan MiG-15 which was ultimately selected and went on to become one of the most successful jet fighters of its era, the Lavochkin La-168 was designed in response to a 1946 request for an advanced swept-wing jet fighter capable of transonic performance. It was to use new turbojet based on the Rolls-Royce Nene in competition with the design bureaus of Artem Mikoyan and Mikhail Gurevich, and Aleksandr Yakovlev. A scaled down version of this aircraft would lead to the production of the La-15, which performed well but would be dropped in favor of the MiG-15. 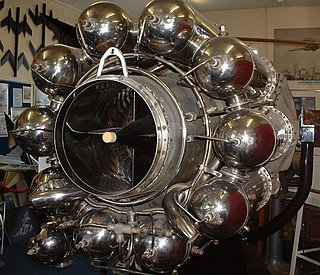 The Lyulka AL-5 was a Soviet axial compressor turbojet developed from the Lyulka TR-3 turbojet around 1950. It was flight-tested in a number of prototype aircraft, but was not accepted for production.

The Yakovlev Yak-1000 was a Soviet supersonic technology demonstrator intended to evaluate the aerodynamic layout and field performance of the cropped delta wing discussed in captured German documents in combination with the new Lyulka AL-5 turbojet. The tandem undercarriage proved to be unsatisfactory and there were serious flight stability problems related to the delta wing, enough so that it never flew after an accident during taxiing tests.

The Power Jets WU was a series of three very different experimental jet engines produced and tested by Frank Whittle and his small team in the late 1930s.