The RD-191 is fueled by a kerosene / LOX mixture and uses an oxygen-rich staged combustion cycle. In the future the engine is expected to become a workhorse in the Russian space sector, as older launch vehicles are phased out of production and service.

Burn ignition is provided chemically, by feeding a starter fluid into the combustion chamber and gas generator, which is self-igniting on contact with liquid oxygen. The engine is capable of throttling down to 30% of nominal thrust; the design also allows for a short-duration enhanced thrust (up to 105% of nominal level) in emergency situations. A Cardan suspension provides for yaw and pitch controls by gimballed thrust deflection up to 8 degrees.

A modern design, the engine incorporates sensors monitoring burn conditions. The measurements are used for telemetry and an emergency protection system.

On 5 September 2008, the creator of the engine, NPO Energomash, stated that the engine had completed the full cycle of development and burn tests and is ready for manufacturing and delivery. [3] The primary launch vehicle utilizing this engine is the Angara rocket, currently being developed. [4]

As of 2010, the engine had passed all development phases, and its nine prototypes had accumulated over 23,000 seconds in 105 firing tests, with one of them reaching the maximum running time of 3,635 seconds in 12 tests. Interdepartmental tests are under way, and manufacturing of the engines for flight development tests has started. The flight tests will begin with a launch of the Angara-1.2 light-class rocket, and then of the Angara-A5 heavy launcher. Despite problems with funding, work on the RD-191 engine is in line with the Angara rocket family's master schedule. [5]

The RD-181 is based on the RD-191 and is adapted for integration on the Antares rocket. While the RD-193 was designed as a close replacement for the NK-33, on 17 December 2014, Orbital Sciences announced that it would use the NPO Energomash RD-181 on the version 2 Antares launch vehicle and had contracted directly with NPO Energomash for up to 20 RD-181 engines. [8] Two engines are used on the first stage of each Antares, which is currently used to carry cargo to the International Space Station under contract to NASA. [9] While Russian press had stated that the contract was valued at US$ 1 billion with options, Orbital stated on 26 January 2015 that even when exercising all the options the contract was less than that amount, and that the initial contractual commitment was significantly less than that. On 19 February 2015, Orbital ATK said that its revamped Antares rocket featuring a new main engine would make its first launch in March 2016. On 29 May 2015, Orbital stated that the new engines had successfully conducted seven certification firings and all went as expected. It also stated that the first two flight models were doing its final tests and would be delivered to Orbital in early July. [10] [11] [12] [13] [14] [15]

The two RD-181s have 440 kilonewtons (100,000 lbf) more thrust than the paired AJ-26 engines used on the first-generation Antares. Northrop Grumman Innovation Systems (formerly Orbital) modified the core stage to accommodate the increased performance, and then to finish up its CRS-1 cargo contract commitment to NASA for delivering a total of 20,000 kg (44,000 lb) of cargo in only four additional flights, rather than the five more that would have been required with the AJ-26/Antares I combination.

In April 2013, it was announced that a further derivation, the RD-193, had completed testing. This version is lighter and shorter, designed for use on the light-launcher Soyuz-2.1v when the inventory of surplus NK-33 engines is exhausted. [18] 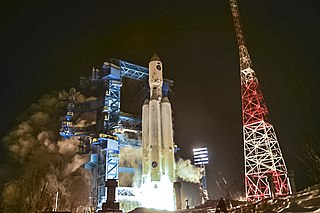 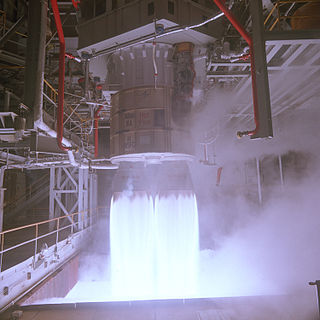 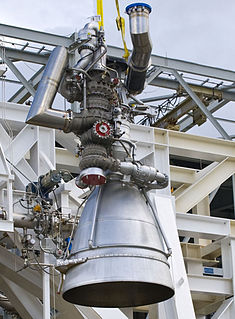 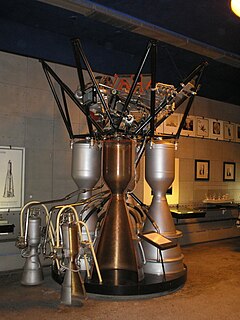 Antares, known during early development as Taurus II, is an expendable launch system developed by Orbital Sciences Corporation and the Yuzhnoye Design Bureau to launch the Cygnus spacecraft to the International Space Station as part of NASA's COTS and CRS programs. Able to launch payloads heavier than 8,000 kg (18,000 lb) into low-Earth orbit, Antares is currently the largest rocket operated by Northrop Grumman. Antares launches from the Mid-Atlantic Regional Spaceport and made its inaugural flight on April 21, 2013.

The Cygnus spacecraft is an expendable American cargo spacecraft developed by Orbital Sciences Corporation and now manufactured and launched by Northrop Grumman Space Systems as part of NASA's Commercial Resupply Services (CRS) program. It is launched by Northrop Grumman's Antares rocket or ULA's Atlas V and is designed to transport supplies to the International Space Station (ISS) following the retirement of the American Space Shuttle. Since August 2000, ISS resupply missions have been regularly flown by the Russian Progress spacecraft, as well as by the European Automated Transfer Vehicle, and the Japanese H-II Transfer Vehicle. With the Cygnus spacecraft and the SpaceX Dragon, NASA seeks to increase its partnerships with domestic commercial aviation and aeronautics industry. 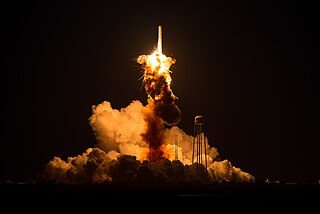 Orbital-3, also known as Orb-3, was an attempted flight of Cygnus, an automated cargo spacecraft developed by United States-based company Orbital Sciences, on 28 October 2014. The mission was intended to launch at 22:22:38 UTC that evening. This flight, which would have been its fourth to the International Space Station and the fifth of an Antares launch vehicle, resulted in the Antares rocket exploding seconds after liftoff. 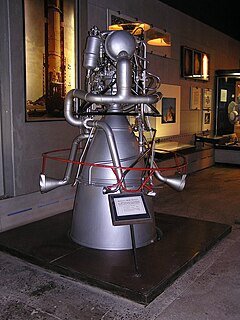 The RD-119 was a liquid rocket engine, burning liquid oxygen and UDMH in the gas-generator cycle. It has a huge expansion ratio on the nozzle and uses a unique propellant combination to achieve an extremely high isp of 352 s for a semi-cryogenic gas-generator engine. It also has a unique steering mechanism. The engine main nozzle is fixed, and the output of the gas generator is fed into four nozzles on the side of the engine. Instead of using gimbaled verniers to supply vector control, the combustion gases are distributed by an electrically driven system that can control the thrust among the nozzles.

Raptor is a family of full-flow staged combustion cycle rocket engines developed and manufactured by SpaceX, for use on the in-development Starship fully reusable launch vehicle. The engine is powered by cryogenic liquid methane and liquid oxygen (LOX), rather than the RP-1 kerosene and LOX used in SpaceX's prior Merlin and Kestrel rocket engines. The Raptor engine has more than twice the thrust of SpaceX's Merlin engine that powers their current Falcon 9 and Falcon Heavy launch vehicles.