The Vympel K-13 (NATO reporting name: AA-2 "Atoll") is a short-range, infrared homing air-to-air missile developed by the Soviet Union. It is similar in appearance and function to the American AIM-9 Sidewinder from which it was reverse-engineered. Although it since has been replaced by more modern missiles in frontline service, it saw widespread service in many nations.

During the Second Taiwan Strait Crisis in 1958, Taiwan's F-86 Sabres faced the much higher performance mainland Chinese PLAAF MiG-17s. The MiG-17s had speed, maneuverability, and altitude advantages over the Sabres, allowing them to engage only when they desired, normally at advantageous times. In response, the US Navy rushed to modify 100 Taiwanese Sabres to carry the newly introduced AIM-9 Sidewinder missile. These were introduced into combat on 24 September 1958, when a group of MiG-17s cruised past a flight of Sabres, only to find themselves under attack by missile fire. This was the first instance of guided missiles being used in air-to-air combat. [2]

On 28 September 1958, [3] a similar engagement resulted in one of the missiles becoming lodged in a MiG-17 without exploding, allowing it to be removed after landing. The Soviets later became aware that the Chinese had at least one Sidewinder, and after some wrangling, were able to persuade the Chinese to send them one of the captured missiles. [4] Gennadiy Sokolovskiy, later chief engineer at the Vympel team, said that "the Sidewinder missile was to us a university offering a course in missile construction technology which has upgraded our engineering education and updated our approach to production of future missiles." [5]

A subsequent claim was made by Ron Westrum in his book Sidewinder that the Soviets obtained the plans for the Sidewinder from Swedish Colonel and convicted spy Stig Wennerström, and rushed their version into service by 1961 copying it so closely that even the part numbers were duplicated. [6] Although Wennerström did leak information of the Sidewinder after negotiating its purchase for Sweden, none of the known Soviet sources mention this, while all explicitly mention the Chinese example. [5] [ dead link ]

Development and early use

The Sidewinder was quickly reverse engineered as the K-13 (also called R-3 or Object 300) and entered limited service only two years later in 1960. This was followed by the improved K-13A (R-3S, Object 310), which entered service in 1962. The R-3S was the first version to enter widespread production, in spite of a very long seeker settling time on the order of 22 seconds, as opposed to 11 seconds for the original version. [5] [ dead link ]

The R-3S was seen by the West in 1961 and given the NATO reporting name AA-2A 'Atoll'. Minimum engagement range for the R-3S is about one kilometre. All K-13 variants are physically similar to Sidewinder, sharing the 5 inch (127 mm) diameter. Subsequent examination of AA-2 missiles captured by NATO forces showed that parts from an AIM-9 could be interchanged with parts from an AA-2 and either combination would still work. [1]

While the R-3S was being introduced in 1961, work started on a semi-active radar homing (SARH) version for high-altitude use, the K-13R (R-3R or Object 320) with 8 km range, [7] similar to the little-used US Navy AIM-9C Sidewinder (carried by the F-8 Crusader). This took longer to develop, and did not enter service until 1966. [5] [ dead link ] This version was designated AA-2B by NATO.

Three training versions were also developed. The R-3U ("uchebnaya", training) was an empty missile body with a homing set, allowing pilots to get used to the aiming of the system. The R-3P ("prakticheskaya", practice) was a complete missile without an explosive warhead. The RM-3V ("raketa-mishen", target-missile) served as an aerial target. [5] [ dead link ]

The Vympel team started working on a more ambitious upgrade in the late 1960s, emerging as the K-13M (R-13M, Object 380) for the IRH and K-13R (R-3R) for the SARH variant, were developed in the late 1960s. These were dubbed Advanced Atoll (AA-2C and AA-2D, respectively) in the west. The R-13M was roughly equivalent to the improved USN AIM-9G Sidewinder, with a new proximity fuse, more propellant for longer range, better maneuverability, and a more sensitive nitrogen-cooled seeker head. None were all-aspect missiles. The same electronics upgrades were also applied to the Kaliningrad K-5 (AA-1) to arm fighters that did not carry the K-13.

The K-13 in different versions was widely exported to the Warsaw Pact and other air forces, and remains in service with a few smaller nations. A license-built version called A-91 was built in Romania, and the People's Republic of China copied the K-13 as the PL-2 . Updated Chinese versions were the PL-3 and PL-5 . Soviet Union provided China K-13 missile technology as a part of MiG-21 fighter jet deal in 1962. In 1967, China successfully completed locally produced K-13 (PL-2) missile tests, and started to deploy this missile to combat units. It was first used to intercept USAF UAVs flown from Vietnam and other south east Asian countries to mainland China.

The K-13 missile was used by North Vietnamese MiG-21 pilots. [9] Due to the NVAF's very limited number of MiG-21s, their common tactic was to approach an American formation at maximum reasonable speed, fire their missiles in volleys, and extend (exit the area) at maximum speed to avoid engagement.

Some of these missiles were seized by Israel during the Six-Day War in the Sinai Peninsula. They were used during the War of Attrition, by Squadron 101 [10] (Mirage C3) and probably also by 117 and 119 squadrons, all Mirage squadrons of the Israeli Air Force. In the late 1960s and early 1970s, the Israelis shot down dozens of MiGs – but there has been no success in using this missile, as Israeli pilots preferred to use cannons or indigenous missiles such as Shafrir 1 and Shafrir 2. 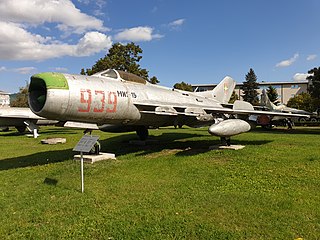 An air-to-air missile (AAM) is a missile fired from an aircraft for the purpose of destroying another aircraft. AAMs are typically powered by one or more rocket motors, usually solid fueled but sometimes liquid fueled. Ramjet engines, as used on the Meteor (missile), are emerging as propulsion that will enable future medium-range missiles to maintain higher average speed across their engagement envelope.

Semi-active radar homing (SARH) is a common type of missile guidance system, perhaps the most common type for longer-range air-to-air and surface-to-air missile systems. The name refers to the fact that the missile itself is only a passive detector of a radar signal—provided by an external ("offboard") source—as it reflects off the target(in contrast to active radar homing, which uses an active radar: transceiver). Semi-active missile systems use bistatic continuous-wave radar.

Fire-and-forget is a type of missile guidance which does not require further guidance after launch such as illumination of the target or wire guidance, and can hit its target without the launcher being in line-of-sight of the target. This is an important property for a guided weapon to have, since a person or vehicle that lingers near the target to guide the missile is vulnerable to attack and unable to carry out other tasks. 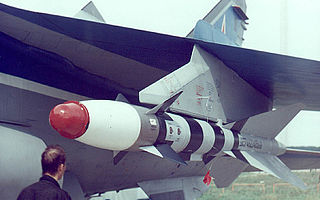 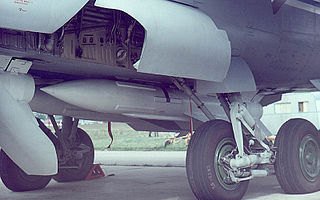 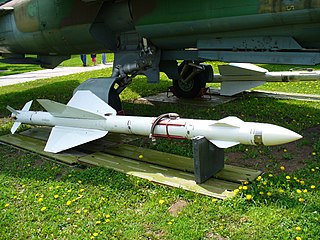 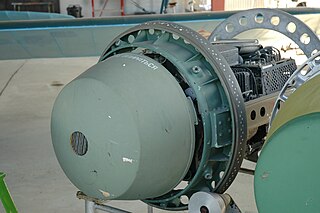 The RP-21 Sapfir was a radar system, developed by the Soviet Union for use in the updated MiG-21PF fighter, and later versions of the MiG-21. 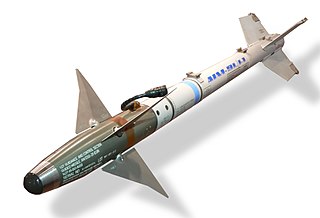 The AIM-9 Sidewinder is a short-range air-to-air missile which entered service with the US Navy in 1956 and subsequently was adopted by the US Air Force in 1964. Since then the Sidewinder has proved to be an enduring international success, and its latest variants are still standard equipment in most western-aligned air forces. The Soviet K-13, a reverse-engineered copy of the AIM-9, was also widely adopted by a number of nations.

PL-2 and its derivatives are members of a series of Chinese air-to-air missiles (AAM) originated from the former-Soviet Vympel K-13 AAM. Unlike PL-2 itself, the second Chinese AAM, most of derivatives of PL-2 failed to enter mass production, with the exception of infrared guided PL-5.