Palu is a chartered city on the Indonesian island of Sulawesi, at the mouth of the Palu River. It is the capital of the province of Central Sulawesi, situated on a long, narrow bay. Because of its sheltered position between mountain ridges, the climate is unusually dry. At the 2010 census Palu had a population of 336,532 [2] On 28 September 2018, the city suffered severe damage due to a series of earthquakes followed by a tsunami, resulting in major soil liquefaction and mudflows, which caused many of the surrounding buildings to become submerged. [3] At the 2020 census Palu had a population of 373,218, [4] not including those living in neighbouring regencies.

The name of Palu comes from the word Topalu'e (the elevated land) because this area was meant to be the ocean. There was an earthquake and plate shift (palu koro) so that the area that was once the sea was lifted and formed the land that is now Palu.

Another source mentions that the name Palu comes from the Kaili word Volo, a bamboo that grows from the Tawaeli area to the Sigi region. Bamboo is very closely connected to the Kaili tribe, due to their dependence on bamboo for their daily needs, whether as foodstuffs (bamboo shoot), building materials (walls, mats, etc.), daily equipment, games (tilako), as well as musical instruments (lalove)[ citation needed ].

Palu originated from a unity of four villages; namely Besusu, Tanggabanggo (Siranindi, now Kamonji), Panggovia (now Lere) and Boyantongo (now Kelurahan Baru). They formed a customary council called Patanggota. One of their assignments was to elect the king and his assistants for royal activities. The kingdom, which would be known as the Palu Kingdom, eventually became one of the well-known and very powerful kingdom.

The Dutch first visited Palu during the reign of King Maili (Mangge Risa) to get protection from Manado in 1868. In 1888, the Dutch governor of Celebes together with armies and several ships arrived Palu kingdom, they fought in Kayumalue. After the Kayumalue war, King Maili was killed by the Dutch and his body was brought to Palu. He was succeeded by King Jodjokodi, on 1 May 1888 he signed a short agreement to the Dutch East Indies colonial authority.

The town was part of the Dutch Empire until Indonesia won independence in 1945–49. The Dutch controleur's house survives as a testament of that era.

In April 1958 during the Permesta rebellion in North Sulawesi, the USA supported and supplied the rebels. Pilots from a CIA Taiwan-based front organization, "Civil Air Transport," flew CIA B-26 Invader aircraft, repeatedly bombed and machine-gunned targets in and around Palu; destroying vehicles, buildings, a bridge and a ship. [5]

On 24 January 2005 at 04:10 (UTC+8), an earthquake with a magnitude of 6.2 occurred in the city. According to the local meteorological office, the epicenter of the earthquake was around 1.249° S, 119.922° E, some 16 km (10 mi) southeast of Palu at the depth of 30 km (19 mi) of Bora Village's hot spring, Biromaru sub-district, Donggala Regency. Panic ensued as most people sought refuge in the highlands for fear of a repeat disaster like the tsunami as occurred in Aceh. The earthquake killed one person, injured four others, and destroyed 177 buildings. [6] [7]

Palu has a tropical rainforest climate (Köppen Af) although relatively dry due to the strong rain shadow of the surrounding mountains.

At the time of the 2010 Census, the city was divided into four districts (kecamatan), but in 2011 these were re-organised into a new division of eight districts. These are tabulated below with their areas and their population at the 2010 Census [16] and the 2020 Census. [17]

Note: (a) the population at 2010 of this new district is included in the figure for the existing districts from which it was split in 2011.

Palu is served by Mutiara Sis Al-Jufri Airport, which is located outside the city center.

Palu is the site of an Indonesian Navy base, and the planned home of the Indonesian Navy's submarines. [18] A quay wall and environmental shelter covering the submarine berthing area were destroyed in the 2018 Sulawesi earthquake and tsunami. [18]

Indonesia Open Paragliding Championship is one of the world championship series which it was the first Indonesia Open held in the region on 19–25 June 2011. 78 paragliders taking part in the championship from Indonesia, Japan, Malaysia, the Philippines, Russia, South Korea and Switzerland competed at Wayu village (the Matantimali hills, 800 masl) about 30 kilometres (19 miles) from Palu. [19]

Central Sulawesi is a province of Indonesia located at the centre of the island of Sulawesi. The administrative capital and largest city is located in Palu. The 2010 census recorded a population of 2,635,009 for the province, and the 2020 Census recorded 2,985,734, of whom 1,534,706 were male and 1,451,028 were female. Central Sulawesi has an area of 61,841.29 km2 (23,877 sq mi), the largest area among all provinces on Sulawesi Island, and has the second-largest population on Sulawesi Island after the province of South Sulawesi. It is bordered by the provinces of Gorontalo to the north, West Sulawesi, South Sulawesi and South East Sulawesi to the south, by Maluku to the east, and by the Makassar Strait to the west. The province is inhabited by many ethnic groups, such as the Kaili, Tolitoli, etc. The official language of the province is Indonesian, which is used for official purposes and inter-ethnic communication, while there are several indigenous language spoken by the Indigenous peoples of Central Sulawesi. Islam is the dominant religion in the province, followed by Christianity which is mostly adhered to by the people in the eastern part of the province.

The Mentawai Islands Regency are a chain of about seventy islands and islets approximately 150 kilometres off the western coast of Sumatra in Indonesia. They cover 6,033.76 sq2 and had a population of 76,173 at the 2010 Census and 87,623 at the 2020 Census. Siberut at 3,838.25 square kilometres is the largest of the islands. The other major islands are Sipura, North Pagai, and South Pagai. The islands lie off the Sumatran coast, across the Mentawai Strait. The indigenous inhabitants of the islands are known as the Mentawai people. The Mentawai Islands have become a noted destination for surfing, with over 40 boats offering surf charters to international guests.

Tana Toraja Regency is a landlocked regency (kabupaten) of South Sulawesi Province of Indonesia, and home to the Toraja ethnic group. It covers an area of 2,054.30 km2 and had a population of 221,081 at the 2010 Census and 280,794 at the 2020 Census. The local government seat is in Makale, while the center of Toraja culture is in Rantepao. Formerly, the Tana Toraja area covered a larger area, but in 2008 this was divided into two regencies, consisting of Tana Toraja with its capital at Makale and Toraja Utara with its capital at Rantepao. 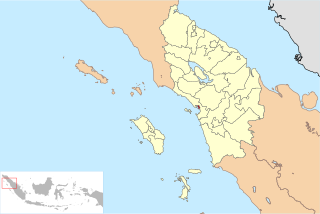 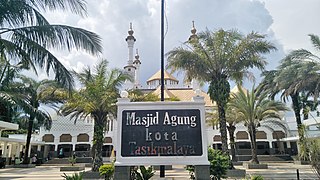 Tasikmalaya is a city in West Java, Indonesia. The city is sometimes dubbed kota santri or "the City of a Thousand Pesantrens" for its abundance of Islamic boarding schools. Located around 120 kilometres (75 mi) southeast from the provincial capital of Bandung, Tasikmalaya is passed by Indonesian National Route 3. 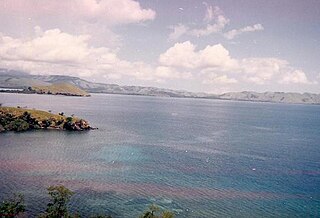 Sikka is a regency within East Nusa Tenggara province, Indonesia, on the island of Flores. It covers an area of 1,731.91 km² and had a population of 300,301 at the 2010 Census. The capital is the town of Maumere, which comprises the districts of Alok Barat, Alok and Alok Timur. 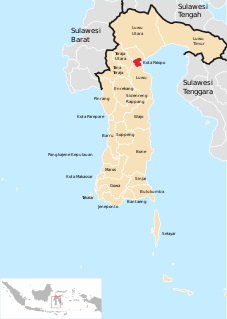 Palopo or Kota Palopo is one of the autonomous cities (municipalities) in South Sulawesi Province of Indonesia, and the second-largest city in the province. Until it acquired its autonomy, Palopo was the capital of Luwu Regency. The area of the city is 247.52 km2, and it had a population of 148,033 at the 2010 Census and 184,681 at the 2020 Census, comprising 92,444 males and 92,237 females. 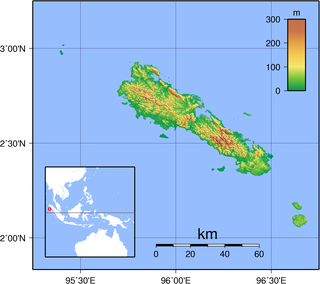 The Banggai Archipelago is a group of islands, which are located at the far eastern end of Central Sulawesi, Indonesia. It makes up a newly established regency (kabupaten) of Central Sulawesi Province of Indonesia, created by splitting the existing Banggai Regency into a new Banggai Regency situated on the mainland of Sulawesi and a Banggai Islands Regency then comprising the entire archipelago. In December 2014 a further splitting of the Regency was the removal of seven districts to form a new Banggai Laut Regency.

Sigi Regency is a regency of Central Sulawesi, Indonesia. It lies upstream on the Palu River, and immediately south of Palu city, the provincial capital. It covers an area of 5,196.02 km2 and had a population of 215,030 at the 2010 Census and 239,421 at the 2020 Census. The principal town lies at Sigi Biromaru. 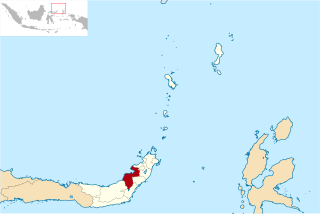 Kotamobagu is a city in North Sulawesi, Indonesia. It is the principal centre of the southern part of the province - the Bolaang Mongonow region, which is projected by the Indonesian government to be separated from the rest of North Sulawesi and formed into a separate province. The city covers an area of 108.89 km2, and had a population of 107,459 at the 2010 Census, rising to 123,722 at the 2020 Census.

North Toraja is a landlocked regency (kabupaten) of South Sulawesi Province of Indonesia, and the home of the Toraja ethnic group. The local government seat is in Rantepao which is also the center of Toraja culture. Formerly this regency was part of Tana Toraja Regency, but in 2008 was split off to form a separate Regency. It covers an area of 1,151.47 km2 and had a population of 216,762 at the 2010 Census and 261,086 at the 2020 Census, comprising 133,335 males and 127,751 females.

Islam in Central Sulawesi, a province of Indonesia, is the majority religion embraced by around 75% of the population, out of a total of 2,683,722 inhabitants . The propagators of Islam were thought to enter the Central Sulawesi through neighboring regions, namely Bone, Wajo, and Mandar from the south and west routes, and through Gorontalo and Ternate from the north and east routes via Tomini Bay and Tolo Bay.