This is a list of the most populous cities in Indonesia. It excludes urban-characterized settlements such as regency seats, which does not have city status. Indonesia has 93 cities classified as kota (city) and one provincial-level capital city. Population figures are taken from the 2020 census by Statistics Indonesia (BPS). [1]

Jakarta is the largest city and the only megacity in Indonesia, with a population of 10.56 million. As a primate city, Jakarta is nearly four times larger than the second largest city Surabaya. Jakarta's status is unique compared to other cities in Indonesia, since it is technically a province with a city management. It is subdividied into five administrative cities, which are not self-governed (without municipal council nor government budget). All five of Jakarta's satellite cities also have passed one million mark in population, with the largest one being Bekasi.

The other largest cities by region include Medan (Sumatra, also the largest outside of Java), Samarinda (Kalimantan), Denpasar (Lesser Sunda Islands), Makassar (Sulawesi), Ambon (Maluku Islands), and Jayapura (Western New Guinea). Jayapura is also the fastest-growing city Indonesia, at 55.23% in a decade.

Provinces of Indonesia are the 37 administrative division of Indonesia and the highest tier of the local government. Provinces are further divided into regencies and cities, which are in turn subdivided into districts (kecamatan).

West Kalimantan is a province of Indonesia. It is one of five Indonesian provinces comprising Kalimantan, the Indonesian part of the island of Borneo. Its capital city is Pontianak. The province has an area of 147,307 km2, and had a population of 4,395,983 at the 2010 Census and 5,414,390 at the 2020 Census. Ethnic groups include the Dayak, Malay, Chinese, Javanese, Bugis, and Madurese. The borders of West Kalimantan roughly trace the mountain ranges surrounding the vast watershed of the Kapuas River, which drains most of the province. The province shares land borders with Central Kalimantan to the southeast, East Kalimantan to the east, and the Malaysian territory of Sarawak to the north.

Central Kalimantan is a province of Indonesia. It is one of five provinces in Kalimantan, the Indonesian part of Borneo. Its provincial capital is Palangka Raya and in 2010 its population was over 2.2 million, while the 2015 Intermediate Census showed a rise to 2.49 million and the 2020 Census showed a total of 2.67 million.

Maluku is a province of Indonesia. It comprises the central and southern regions of the Maluku Islands. The main city and capital of Maluku province is Ambon on the small Ambon Island. The land area is 62,946 km2, and the total population of this province at the 2010 census was 1,533,506 people, rising to 1,848,923 at the 2020 Census. The official estimate as at mid 2021 was 1,862,626. Maluku is located in Eastern Indonesia. It is directly adjacent to North Maluku and West Papua in the north, Central Sulawesi, and Southeast Sulawesi in the west, Banda Sea, East Timor and East Nusa Tenggara in the south and Arafura Sea and Papua in the east. 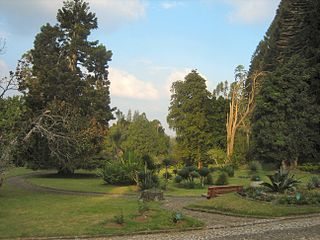 Bogor Regency is a landlocked regency (kabupaten) of West Java, Indonesia, south of DKI Jakarta. Covering an area of 2,986.20 km2, it is considered a bedroom community for Jakarta, and was home to 5,427,068 people at the 2020 census. The official estimate as at mid 2021 was 5,489,536. Its administration is located in the town of Cibinong. 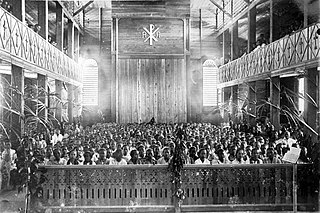 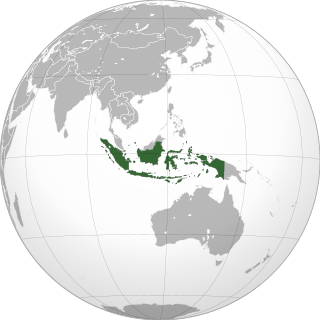 The following is an alphabetical list of topics related to the Republic of Indonesia. 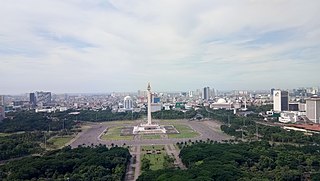 The capital of the Republic of Indonesia is Jakarta, one of the oldest continuously inhabited cities in Southeast Asia. Previously known as Batavia, it was the de facto capital of the Dutch East Indies. In the early 20th century, the Dutch East Indies government attempted to relocate the capital from Batavia to Bandung. During Indonesia's struggle for independence, the Indonesian government moved the capital to Yogyakarta and then to Bukittinggi, where it remained for a short time until the restoration of control to Jakarta. In 2019, during his annual state of the union address at the parliament, President Joko Widodo announced a plan to relocate the capital to Kalimantan on the island of Borneo. As part of the plan, part of Kutai Kartanegara Regency and Penajam North Paser Regency in East Kalimantan will be carved out to create a new province-level planned city, and the capital will be relocated to a more central location within Indonesia. On 17 January 2022, the name was revealed to be Nusantara.

Tanjung Selor is the capital of both the North Kalimantan province in Indonesia, and of the Bulungan Regency. It is among provincial capitals in Indonesia that as of 2021 does not yet have city status, together with Mamuju in West Sulawesi, Sofifi in North Maluku, Nabire in Central Papua, Wamena in Highland Papua, Merauke in South Papua, and Manokwari in West Papua. The district has an area of 677.77 km2 and had a population of 39,439 at the 2010 Census and 56,569 at the 2020 Census.