Last updated December 10, 2022
Council of ministers appointed by the president of Indonesia

The Cabinet of the Republic of Indonesia (Indonesian : Kabinet Republik Indonesia) is part of the executive branch of the Indonesian government. It is composed of the most senior appointed officers of the executive branch of the government serving under the president. Members of the Cabinet (except for the vice president) serve at the pleasure of the president, who can dismiss them at will for no cause.

Indonesia has seen dozens of cabinets since independence in 1945. Although after the New Order most cabinets remained unchanged for five years at a time. Most cabinets are referred to by the names given them at the time of formation. The current presidential cabinet is the Onward Indonesia Cabinet of Joko Widodo. [1]

The concept of a cabinet is not mentioned explicitly in the 1945 Constitution, so Indonesia's cabinets since 14 November 1945 are the result of administrative convention. There have been two types of cabinet in Indonesian history; presidential and parliamentary. In presidential cabinets, the president is responsible for government policy as head of state and government, while in parliamentary cabinets, the cabinet carries out government policy, and is responsible to the legislature. [2]

During the War of Independence from 1945 to 1949, the cabinet changed from a presidential to a parliamentary system, despite this not being the system intended by those who drew up the Constitution; however, at several critical periods, it reverted to a presidential system. During this period, the cabinet had between 16 and 37 ministers with 12-15 ministries. [3]

On 27 December 1949, the Netherlands recognised the sovereignty of the United States of Indonesia (RIS). Under the Federal Constitution of 1949, the RIS had a parliamentary cabinet as ministers were responsible for government policy. With the return to the unitary state of Indonesia in August 1950, the parliamentary cabinet system remained due to an agreement between the governments of the RIS and the Republic of Indonesia (a constituent of the RIS). Article 83 of the Provisional Constitution of 1950 stated that ministers had full responsibility for government policy. Over the following nine years there were seven cabinets with between 18 and 25 members. [4]

On 5 July 1959, President Sukarno issued a decree abrogating the 1950 Constitution and returning to the 1945 Constitution. The cabinet was also dissolved. A new presidential cabinet was formed shortly after, but this new cabinet did not follow the 1945 Constitution either, as the office of prime minister still existed, along with deputy prime ministers. Moreover, the offices of Chief Justice of the Supreme Court of Indonesia and Speaker of the People's Representative Council which were supposed to be equal to the president, and the office of Chairman of the People's Consultative Assembly, which was supposed to be above all government branches, were included into the Cabinet. During the final years of Sukarno's presidency, cabinets were larger, peaking at 111 ministers.

During the New Order under President Suharto, cabinets were smaller, and from 1968 until 1998 lasted for the five-year presidential term. Offices that were not sanctioned by the 1945 Constitution were abolished. Following the fall of Suharto and the beginning of the Reformasi era, the presidential cabinet system has been retained. [5]

Until 2010, cabinet ministries were dubbed 'Departments' (Departemen) following the United States model. After 2010, all 'departements' were renamed into 'ministries' (Kementerian), thus bringing them in line with the Netherlands model of ministries and a state secretariat.

Parliamentary cabinets were usually known by the name of the prime minister, but after 1959 they were named after their principal tasking. [6] The complete list of cabinets follows: [7] [8]

The present Indonesian cabinet, the Onward Indonesia Cabinet (Indonesian : Kabinet Indonesia Maju), was sworn in on 23 October 2019. The cabinet consists of 34 ministers.

The Socialist Party of Indonesia was a political party in Indonesia from 1948 until 1960, when it was banned by President Sukarno.

Muhammad Hatta Lukman was an Indonesian communist politician, who served as the First Deputy Chairman of the Central Committee of the Communist Party of Indonesia (PKI), and a member of the People's Representative Council from 1956 until 1959. He was executed following the 1965 crackdown on the PKI. 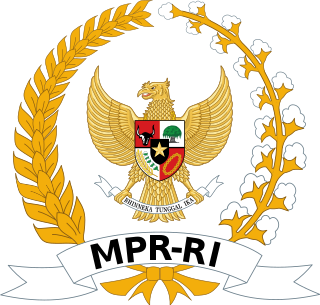 The position of Prime Minister of Indonesia existed from 1945 until 1966. During this period, the prime minister was in charge of the Cabinet of Indonesia, one of the three branches of government along with the People's Representative Council and the president. Following his 1959 decree, President Sukarno assumed the role and powers of prime minister until his resignation in 1966.

Guided Democracy was the political system in place in Indonesia from 1959 until the New Order began in 1966. It was the brainchild of President Sukarno, and was an attempt to bring about political stability. Sukarno believed that the parliamentarian system implemented during the liberal democracy period in Indonesia was ineffective due to its divisive political situation at that time. Instead, he sought a system based on the traditional village system of discussion and consensus, which occurred under the guidance of village elders. With the declaration of martial law and the introduction of this system, Indonesia returned to the presidential system and Sukarno became the head of government again. 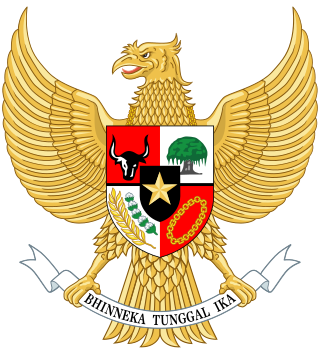 The Sixth Development Cabinet was the Indonesian Cabinet which served under President Suharto and Vice President Try Sutrisno from March 1993 until March 1998. The Cabinet was formed after Suharto was elected to a 6th term as President by the People's Consultative Assembly (MPR).

The Ampera Cabinet was the Indonesian Cabinet which served under President Sukarno and later on, Acting President Suharto from July 1966 until October 1967. The Cabinet was formed after the Provisional People's Consultative Assembly (MPRS) session of 1966 which commissioned Suharto to form a new Cabinet. Although Sukarno would not be removed from the Presidency for some months, for all intents and purposes, the person who was truly in charge of the Cabinet and Indonesia by this point was Suharto.

The Liberal Democracy period in Indonesia, also known as the Era of Parliamentary Democracy, was a period in Indonesian political history, when Indonesia was under a liberal democracy system which began on 17 August 1950 following the dissolution of the federal United States of Indonesia less than a year after its formation, and ended with the imposition of martial law and President Sukarno's decree, resulting in the introduction of the Guided Democracy period on 5 July 1959. 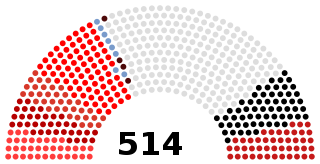 The Central Indonesian National Committee, or KNIP, was a body appointed to assist the president of the newly independent Indonesia. Originally purely advisory, it later gained assumed legislative functions. The Working Committee of the KNIP became part of the People's Representative Council when Indonesia became a unitary state in 1950.

The Presidential Cabinet was the first cabinet established by Indonesia following the 17 August 1945 Indonesian Declaration of Independence. It comprised 20 ministers and four officials. Its term of office ran from 2 September to 14 November 1945. 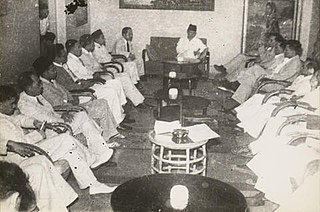 The first Sjahrir Cabinet was the second Indonesian cabinet, named after the Prime Minister. It served from November 1945 to February 1946.

The second Sjahrir Cabinet was the third Indonesian cabinet and the second formed by Sutan Sjahrir. It served from March to June 1946.

The third Sjahrir Cabinet was the fourth Indonesian cabinet. It served from October 1946 to June 1947, when it fell due to disagreements related to implementation of the Linggadjati Agreement and subsequent negotiations with the Dutch. 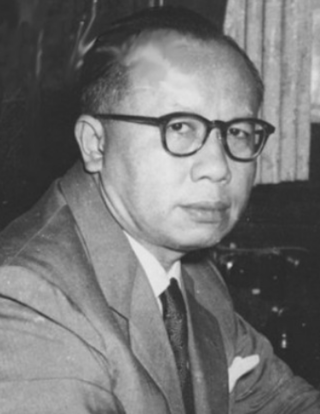 Raden Djuanda Kartawidjaja, commonly known as Djuanda Kartawidjaja, usually referred to simply as Djuanda, was an Indonesian politician and ethnic Sundanese noble from the court of Cirebon, who served as the 11th and last Prime Minister of Indonesia. He previously served as Minister of Communications in seven cabinets from 1946 to 1949 and 1950 to 1953; as Minister of State in 1949 and Minister of Welfare from 1949 to 1950. Djuanda was Indonesia's final Prime Minister in the Sukarno "Karya" cabinets, the final cabinets of the Liberal Democracy Era and as First Minister from 1959 until his death in 1963.

Islamic Association Party of Indonesia was an Islamic political party in Indonesia. In 1973 it was merged into the United Development Party. 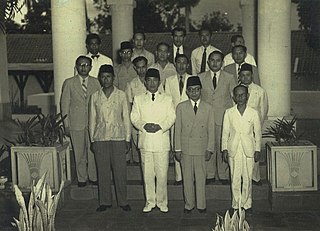 The Soekiman Cabinet was an Indonesian cabinet that served from 27 April 1951 until 25 February 1952, when it fell following revelations that it had signed a mutual security Agreement with the United States.

The Djuanda Cabinet, or "Working Cabinet" was an Indonesian cabinet that served from 9 April 1957 until 5 July 1959, when it was dissolved by a decree from President Sukarno.

The State of the Republic of Indonesia was a federated state (negara bagian) of the United States of Indonesia (RUSI) which was established on 27 December 1949. The territory of the state included parts of Java and most of Sumatra, and its capital was Yogyakarta. The acting president of the Republic was Assaat and the prime minister was first Susanto Tirtoprodjo until 16 January 1950, then Abdul Halim. On 17 August, the United States of Indonesia ceased to exist as the last of the component states dissolved themselves into a unitary Republic of Indonesia encompassing the entire territory of the former Dutch East Indies except for West Papua.