Xenon tetrachloride is an unstable [1] inorganic compound with the chemical formula XeCl4. Unlike other noble gas/halide compounds, it cannot be synthesized by simply combining the elements, by using a more-active halogenating agent, or by substitution of other halides on tetrahaloxenon compounds. Instead, a decay technique can be used, starting with K129ICl4. The iodine-129 atom of the 129
ICl–
4 covalent cluster is radioactive and undergoes beta decay to become xenon-129. [2] [3] The resulting XeCl4 molecule has a square planar molecular geometry analogous to xenon tetrafluoride. [4]

Alternately, the product can be obtained by subjecting the elements to an electric discharge. [1] 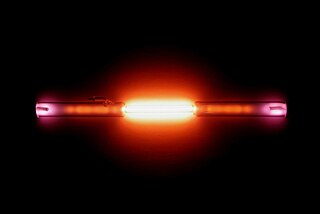 The noble gases make up a class of chemical elements with similar properties; under standard conditions, they are all odorless, colorless, monatomic gases with very low chemical reactivity. The six naturally occurring noble gases are helium (He), neon (Ne), argon (Ar), krypton (Kr), xenon (Xe), and the radioactive radon (Rn).

Xenon is a chemical element with the symbol Xe and atomic number 54. It is a colorless, dense, odorless noble gas found in Earth's atmosphere in trace amounts. Although generally unreactive, it can undergo a few chemical reactions such as the formation of xenon hexafluoroplatinate, the first noble gas compound to be synthesized. 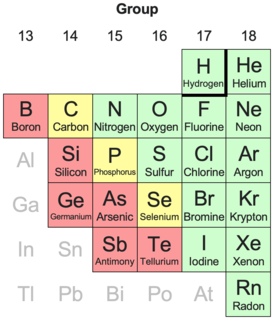 In chemistry, a nonmetal is a chemical element that generally lacks a predominance of metallic properties; they range from colorless gases to shiny and high melting temperature solids. The electrons in nonmetals behave differently to those in metals. With some exceptions, those in nonmetals are fixed in place, resulting in nonmetals usually being poor conductors of heat and electricity and brittle or crumbly when solid. The electrons in metals are generally free moving and this is why metals are good conductors and most are easily flattened into sheets and drawn into wires. Nonmetal atoms are moderately to highly electronegative; they tend to attract electrons in chemical reactions and to form acidic compounds.

Xenon hexafluoroplatinate is the product of the reaction of platinum hexafluoride with xenon, in an experiment that proved the chemical reactivity of the noble gases. This experiment was performed by Neil Bartlett at the University of British Columbia, who formulated the product as "Xe+[PtF6]−", although subsequent work suggests that Bartlett's product was probably a salt mixture and did not in fact contain this specific salt.

Xenon tetroxide is a chemical compound of xenon and oxygen with molecular formula XeO4, remarkable for being a relatively stable compound of a noble gas. It is a yellow crystalline solid that is stable below −35.9 °C; above that temperature it is very prone to exploding and decomposing into elemental xenon and oxygen (O2).

Xenon tetrafluoride is a chemical compound with chemical formula XeF
4. It was the first discovered binary compound of a noble gas. It is produced by the chemical reaction of xenon with fluorine:

Xenon hexafluoride is a noble gas compound with the formula XeF6. It is one of the three binary fluorides of xenon, the other two being XeF2 and XeF4. All known are exergonic and stable at normal temperatures. XeF6 is the strongest fluorinating agent of the series. It is a colorless solid that readily sublimes into intensely yellow vapors.

Platinum hexafluoride is the chemical compound with the formula PtF6, and is one of seventeen known binary hexafluorides. It is a dark-red volatile solid that forms a red gas. The compound is a unique example of platinum in the +6 oxidation state. With only four d-electrons, it is paramagnetic with a triplet ground state. PtF6 is a strong fluorinating agent and one of the strongest oxidants, capable of oxidising xenon and O2. PtF6 is octahedral in both the solid state and in the gaseous state. The Pt-F bond lengths are 185 picometers. 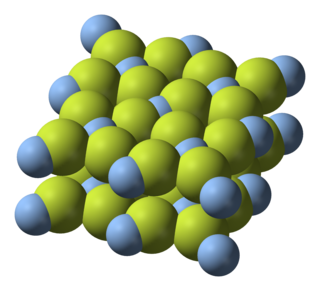 Xenon trioxide is an unstable compound of xenon in its +6 oxidation state. It is a very powerful oxidizing agent, and liberates oxygen from water slowly, accelerated by exposure to sunlight. It is dangerously explosive upon contact with organic materials. When it detonates, it releases xenon and oxygen gas. 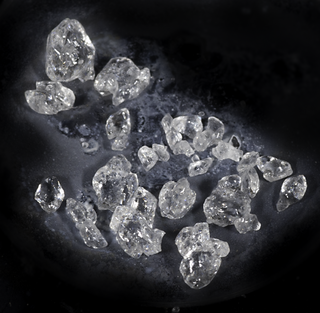 Xenon difluoride is a powerful fluorinating agent with the chemical formula XeF
2, and one of the most stable xenon compounds. Like most covalent inorganic fluorides it is moisture-sensitive. It decomposes on contact with water vapor, but is otherwise stable in storage. Xenon difluoride is a dense, colourless crystalline solid.

Xenic acid is a proposed noble gas compound with the chemical formula H2XeO4 or XeO2(OH)2. It has not been isolated, and the published characterization data are ambiguous.

Krypton difluoride, KrF2 is a chemical compound of krypton and fluorine. It was the first compound of krypton discovered. It is a volatile, colourless solid. The structure of the KrF2 molecule is linear, with Kr−F distances of 188.9 pm. It reacts with strong Lewis acids to form salts of the KrF+ and Kr
2F+
3 cations.

A hexafluoride is a chemical compound with the general formula QXnF6, QXnF6m−, or QXnF6m+. Many molecules fit this formula. An important hexafluoride is hexafluorosilicic acid (H2SiF6), which is a byproduct of the mining of phosphate rock. In the nuclear industry, uranium hexafluoride (UF6) is an important intermediate in the purification of this element. 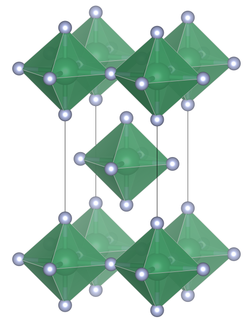 Tin(IV) fluoride is a chemical compound of tin and fluorine with the chemical formula SnF4 and is a white solid with a melting point above 700 °C. 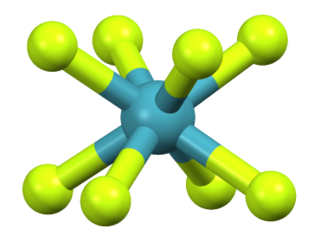 Xenon dibromide is an unstable chemical compound with the chemical formula XeBr2. It was only created by the decomposition of iodine-129: