It has a trigonal pyramidal shape. Its 31P NMR spectrum exhibits a singlet around +220 ppm with reference to a phosphoric acid standard.[ citation needed ]

PCl3 as an electrophile

Phosphorus trichloride is the precursor to organophosphorus compounds that contain one or more P(III) atoms, most notably phosphites and phosphonates. These compounds do not usually contain the chlorine atoms found in PCl3.

A large number of similar substitution reactions are known, the most important of which is the formation of phosphites by reaction with alcohols and phenols. For example, with phenol, triphenyl phosphite is formed:

where "Ph" stands for the phenyl group, -C6H5. Alcohols such as ethanol react similarly in the presence of a base such as a tertiary amine: [8]

In the absence of base, however, the reaction proceeds with the following stoichiometry to give diethylphosphite: [9] [10]

Aminophosphonates are widely used as sequestering and antiscale agents in water treatment. The large volume herbicide glyphosate is also produced this way. The reaction of PCl3 with Grignard reagents and organolithium reagents is a useful method for the preparation of organic phosphines with the formula R3P (sometimes called phosphanes) such as triphenylphosphine, Ph3P.

PCl3 as a nucleophile

Phosphorus trichloride has a lone pair, and therefore can act as a Lewis base, [11] e.g., forming a 1:1 adduct Br3B-PCl3. Metal complexes such as Ni(PCl3)4 are known, again demonstrating the ligand properties of PCl3.

This Lewis basicity is exploited in the Kinnear–Perren reaction to prepare alkylphosphonyl dichlorides (RP(O)Cl2) and alkylphosphonate esters (RP(O)(OR')2). Alkylation of phosphorus trichloride is effected in the presence of aluminium trichloride give the alkyltrichlorophosphonium salts, which are versatile intermediates: [12]

The RPCl+
3 product can then be decomposed with water to produce an alkylphosphonic dichloride RP(=O)Cl2.

PCl3 as a ligand

PCl3, like the more popular phosphorus trifluoride, is a ligand in coordination chemistry. One example is Mo(CO)5PCl3. [13]

PCl3 is important indirectly as a precursor to PCl5, POCl3 and PSCl3, which are used in many applications, including herbicides, insecticides, plasticisers, oil additives, and flame retardants.

For example, oxidation of PCl3 gives POCl3, which is used for the manufacture of triphenyl phosphate and tricresyl phosphate, which find application as flame retardants and plasticisers for PVC. They are also used to make insecticides such as diazinon. Phosphonates include the herbicide glyphosate.

PCl3 is the precursor to triphenylphosphine for the Wittig reaction, and phosphite esters which may be used as industrial intermediates, or used in the Horner-Wadsworth-Emmons reaction, both important methods for making alkenes. It can be used to make trioctylphosphine oxide (TOPO), used as an extraction agent, although TOPO is usually made via the corresponding phosphine.

PCl3 is also used directly as a reagent in organic synthesis. It is used to convert primary and secondary alcohols into alkyl chlorides, or carboxylic acids into acyl chlorides, although thionyl chloride generally gives better yields than PCl3. [14]

Industrial production of phosphorus trichloride is controlled under the Chemical Weapons Convention, where it is listed in schedule 3, as it can be used to produce mustard agents. [19] 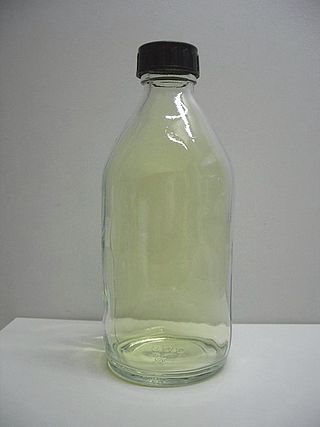 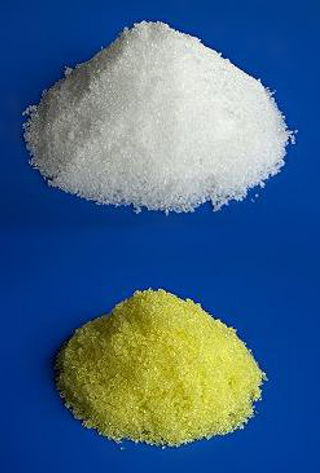 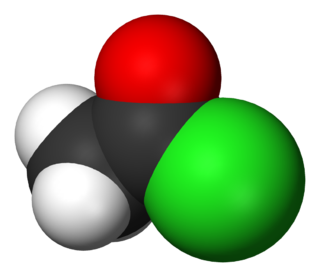 Acetyl chloride is an acyl chloride derived from acetic acid. It belongs to the class of organic compounds called acid halides. It is a colorless, corrosive, volatile liquid. Its formula is commonly abbreviated to AcCl. 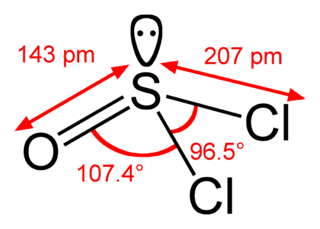 In polyatomic cations with the chemical formula PR+
4. These cations have tetrahedral structures. The salts are generally colorless or take the color of the anions.

In organic chemistry, a phosphite ester or organophosphite usually refers to an organophosphorous compound with the formula P(OR)3. They can be considered as esters of an unobserved tautomer phosphorous acid, H3PO3, with the simplest example being trimethylphosphite, P(OCH3)3. Some phosphites can be considered esters of the dominant tautomer of phosphorous acid (HP(O)(OH)2). The simplest representative is dimethylphosphite with the formula HP(O)(OCH3)2. Both classes of phosphites are usually colorless liquids. 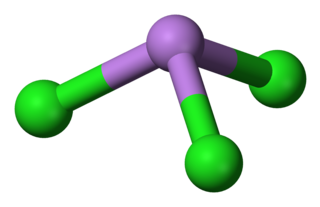 Hexachlorophosphazene is an inorganic compound with the formula (NPCl2)3. The molecule has a cyclic, unsaturated backbone consisting of alternating phosphorus and nitrogen centers, and can be viewed as a trimer of the hypothetical compound N≡PCl2. Its classification as a phosphazene highlights its relationship to benzene. There is large academic interest in the compound relating to the phosphorus-nitrogen bonding and phosphorus reactivity. 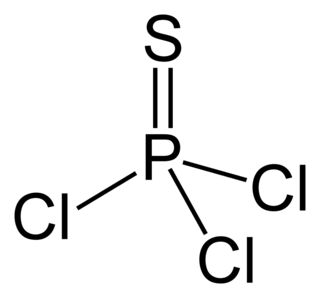 Trimethyl phosphite is an organophosphorus compound with the formula P(OCH3)3, often abbreviated P(OMe)3. It is a colorless liquid with a highly pungent odor. It is the simplest phosphite ester and finds used as a ligand in organometallic chemistry and as a reagent in organic synthesis. The molecule features a pyramidal phosphorus(III) center bound to three methoxy groups.