Iridium tetrachloride is an inorganic compound with the approximate formula IrCl4(H2O)n. It is a water-soluble dark brown amorphous solid. A well defined derivative is ammonium hexachloroiridate ((NH4)2IrCl6). [1] It is used to prepare catalysts, such as the Henbest Catalyst for transfer hydrogenation of cyclohexanones. [2]

Iridium is a chemical element with the symbol Ir and atomic number 77. A very hard, brittle, silvery-white transition metal of the platinum group, iridium is the second-densest metal with a density of 22.56 g/cm3 as defined by experimental X-ray crystallography. At room temperature and standard atmospheric pressure, iridium has a calculated density around 0.03 g/cm3 lower than osmium measured the same way. It is the most corrosion-resistant metal, even at temperatures as high as 2000 °C. Although only certain molten salts and halogens are corrosive to solid iridium, finely divided iridium dust is much more reactive and can be flammable. 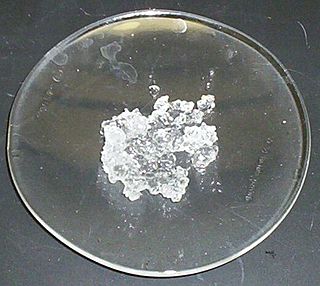 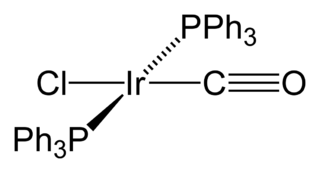 Vaska's complex is the trivial name for the chemical compound trans-carbonylchlorobis(triphenylphosphine)iridium(I), which has the formula IrCl(CO)[P(C6H5)3]2. This square planar diamagnetic organometallic complex consists of a central iridium atom bound to two mutually trans triphenylphosphine ligands, carbon monoxide, and a chloride ion. The complex was first reported by J. W. DiLuzio and Lauri Vaska in 1961. Vaska's complex can undergo oxidative addition and is notable for its ability to bind to O2 reversibly. It is a bright yellow crystalline solid. 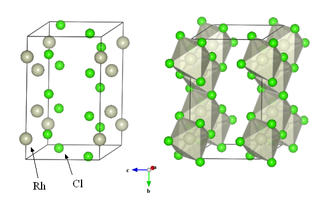 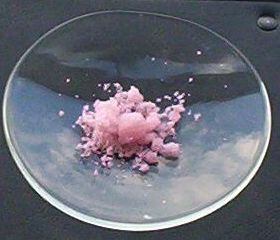 Erbium(III) chloride, is a violet solid with the formula ErCl3. It is used in the preparation of erbium metal. 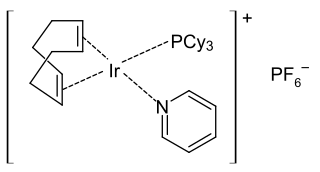 Crabtree's catalyst is an organoiridium compound with the formula [C8H12IrP(C6H11)3C5H5N]PF6. It is a homogeneous catalyst for hydrogenation and hydrogen-transfer reactions, developed by Robert H. Crabtree. This air stable orange solid is available commercially. 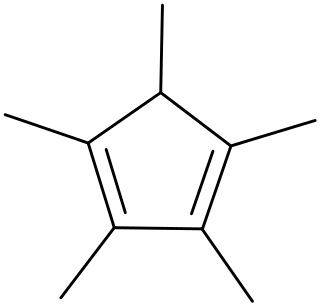 Tetrairidium dodecacarbonyl is the chemical compound with the formula Ir4(CO)12. This tetrahedral cluster is the most common and most stable "binary" carbonyl of iridium. This air-stable species is only poorly soluble in organic solvents. It has been used to prepare bimetallic clusters and catalysts, e.g. for the water gas shift reaction, and reforming, but these studies are of purely academic interest.

Martin Arthur Bennett FRS is an Australian inorganic chemist. He gained recognition for studies on the co-ordination chemistry of tertiary phosphines, olefins, and acetylenes, and the relationship of their behaviour to homogeneous catalysis.

Organoiridium chemistry is the chemistry of organometallic compounds containing a iridium-carbon chemical bond. Organoiridium compounds are relevant to many important processes including olefin hydrogenation and the industrial synthesis of acetic acid. They are also of great academic interest because of the diversity of the reactions and their relevance to the synthesis of fine chemicals.

Pentamethylcyclopentadienyl iridium dichloride is an organometallic compound with the formula [(C5(CH3)5IrCl2)]2, commonly abbreviated [Cp*IrCl2]2 This bright orange air-stable diamagnetic solid is a reagent in organometallic chemistry.

2-Phenylpyridine is an organic compound with the formula C6H5C5H4N. It is a colourless viscous liquid. The compound and related derivatives have attracted interest as precursors to highly fluorescent metal complexes of possible value as organic light emitting diodes (OLEDs).

Cyclooctadiene iridium chloride dimer is an organoiridium compound with the formula Ir2Cl2(C8H12)2, where C8H12 is the diene 1,5-cyclooctadiene. It is an orange solid that is soluble in organic solvents. The complex is used as a precursor to other iridium complexes, some of which are used in homogeneous catalysis. The solid is air-stable but its solutions degrades in air.

Ammonium hexachloroiridate(IV) is the inorganic compound with the formula (NH4)2[IrCl6]. This dark brown solid is the ammonium salt of the iridium(IV) complex [IrCl6]2−. It is a commercially important iridium compound one of the most common complexes of iridium(IV). A related but ill-defined compound is iridium tetrachloride, which is often used interchangeably.