Rubidium chloride is the chemical compound with the formula RbCl. This alkali metal halide salt is composed of rubidium and chlorine, and finds diverse uses ranging from electrochemistry to molecular biology.

In its gas phase, RbCl is diatomic with a bond length estimated at 2.7868 Å. [1] This distance increases to 3.285 Å for cubic RbCl, reflecting the higher coordination number of the ions in the solid phase. [2]

Depending on conditions, solid RbCl exists in one of three arrangements or polymorphs as determined with holographic imaging: [3]

The sodium chloride (NaCl) polymorph is most common. A cubic close-packed arrangement of chloride anions with rubidium cations filling the octahedral holes describes this polymorph. [4] Both ions are six-coordinate in this arrangement. The lattice energy of this polymorph is only 3.2 kJ/mol less than the following structure's. [5]

At high temperature and pressure, RbCl adopts the caesium chloride (CsCl) structure (NaCl and KCl undergo the same structural change at high pressures). Here, the chloride ions form a simple cubic arrangement with chloride anions occupying the vertices of a cube surrounding a central Rb+. This is RbCl's densest packing motif. [2] Because a cube has eight vertices, both ions' coordination numbers equal eight. This is RbCl's highest possible coordination number. Therefore, according to the radius ratio rule, cations in this polymorph will reach their largest apparent radius because the anion-cation distances are greatest. [4]

The sphalerite polymorph of rubidium chloride has not been observed experimentally. This is consistent with the theory; the lattice energy is predicted to be nearly 40.0 kJ/mol smaller in magnitude than those of the preceding structures. [5]

The most common preparation of pure rubidium chloride involves the reaction of its hydroxide with hydrochloric acid, followed by recrystallization: [6]

Because RbCl is hygroscopic, it must be protected from atmospheric moisture, e.g. using a desiccator. RbCl is primarily used in laboratories. Therefore, numerous suppliers (see below) produce it in smaller quantities as needed. It is offered in a variety of forms for chemical and biomedical research.

Every 18 mg of rubidium chloride is equivalent to approximately one banana equivalent dose due to the large fraction (27.8%) of naturally-occurring radioactive isotope rubidium-87. 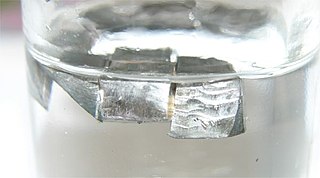 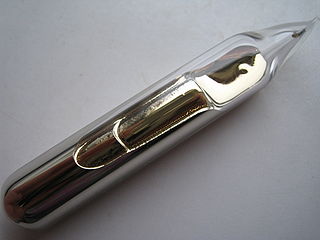 Caesium is a chemical element with the symbol Cs and atomic number 55. It is a soft, silvery-golden alkali metal with a melting point of 28.5 °C (83.3 °F), which makes it one of only five elemental metals that are liquid at or near room temperature. Caesium has physical and chemical properties similar to those of rubidium and potassium. The most reactive of all metals, it is pyrophoric and reacts with water even at −116 °C (−177 °F). It is the least electronegative element, with a value of 0.79 on the Pauling scale. It has only one stable isotope, caesium-133. Caesium is mined mostly from pollucite. The element has 40 known isotopes, making it, along with barium and mercury, one of the elements with the most isotopes. Caesium-137, a fission product, is extracted from waste produced by nuclear reactors. 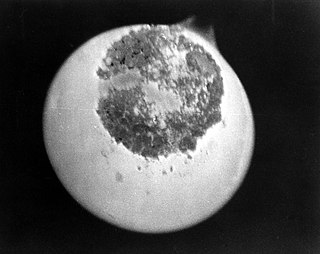 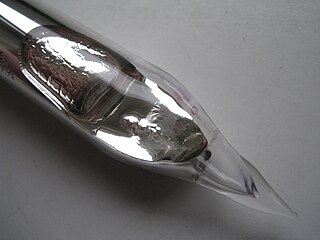 Rubidium is the chemical element with the symbol Rb and atomic number 37. Rubidium is a very soft, whitish-grey metal in the alkali metal group. Rubidium metal shares similarities to potassium and caesium in physical appearance, softness and conductivity. Rubidium cannot be stored under atmospheric oxygen, as a highly exothermic reaction will ensue, sometimes even resulting in the metal catching fire. 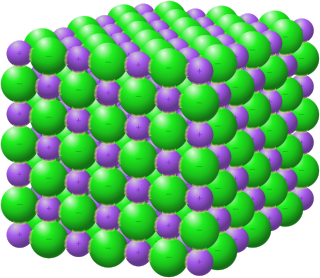 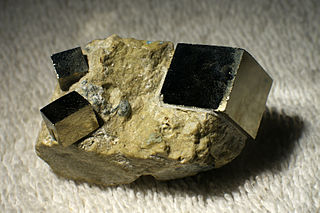 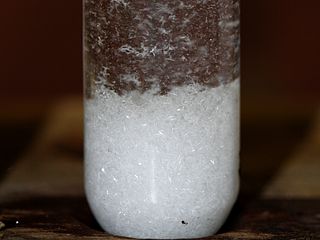 Ionic radius, rion, is the radius of a monatomic ion in an ionic crystal structure. Although neither atoms nor ions have sharp boundaries, they are treated as if they were hard spheres with radii such that the sum of ionic radii of the cation and anion gives the distance between the ions in a crystal lattice. Ionic radii are typically given in units of either picometers (pm) or angstroms (Å), with 1 Å = 100 pm. Typical values range from 31 pm (0.3 Å) to over 200 pm (2 Å). 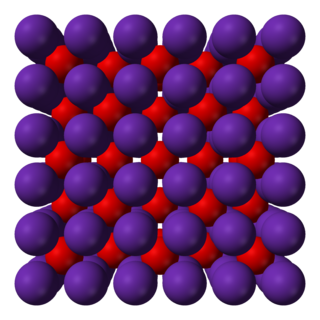 Rubidium oxide is the chemical compound with the formula Rb2O. Rubidium oxide is highly reactive towards water, and therefore it would not be expected to occur naturally. The rubidium content in minerals is often calculated and quoted in terms of Rb2O. In reality, the rubidium is typically present as a component of (actually, an impurity in) silicate or aluminosilicate. A major source of rubidium is lepidolite, KLi2Al(Al,Si)3O10(F,OH)2, wherein Rb sometimes replaces K.

Rubidium perchlorate, RbClO4, is the perchlorate of rubidium. It is an oxidizing agent, as are all perchlorates.

In chemistry, the lattice energy is the energy change upon formation of one mole of a crystalline ionic compound from its constituent ions, which are assumed to initially be in the gaseous state. It is a measure of the cohesive forces that bind ionic solids. The size of the lattice energy is connected to many other physical properties including solubility, hardness, and volatility. Since it generally cannot be measured directly, the lattice energy is usually deduced from experimental data via the Born–Haber cycle.

A Schottky defect is an excitation of the site occupations in a crystal lattice leading to point defects named after Walter H. Schottky. In ionic crystals, this defect forms when oppositely charged ions leave their lattice sites and become incorporated for instance at the surface, creating oppositely charged vacancies. These vacancies are formed in stoichiometric units, to maintain an overall neutral charge in the ionic solid. 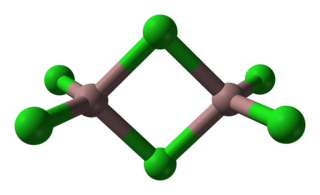