The New Zealand End of Life Choice referendum was a binding referendum [1] held on 17 October 2020, with early voting taking place from 3 October, in conjunction with the 2020 general election and cannabis referendum, on the question of whether the End of Life Choice Act 2019 should come into force. [2] The Act would legalise voluntary euthanasia for those with a terminal illness and less than six months left to live, if confirmed to be eligible by two doctors. [1] [3] New Zealand is the first country to put euthanasia legalisation to a referendum. [1]

As the majority of voters support the legislation, the bill came into force on 7 November 2021, 12 months after the final vote count was announced. [4] Preliminary results for the referendum were released by the Electoral Commission on 30 October 2020, and official results were released on 6 November 2020. In the final results, 65.1% of people supported the End of Life Choice Act while 33.7% were opposed. [5]

Euthanasia was illegal in New Zealand, with it being illegal to "aid and abet suicide" under section 179 of the Crimes Act 1961. Two earlier attempts to legalise euthanasia failed to get through the New Zealand Parliament. Hawkes Bay National MP Michael Laws' 1995 Death with Dignity Bill failed by 61 votes against and 29 supporting, and NZ First MP Peter Brown's 2003 Death with Dignity Bill failed in its first reading by 60 votes opposing to 58 supporting. [6]

Do you support the End of Life Choice Act 2019 coming into force?

Support for assisted dying since 2000 has averaged at around 68%. [3] During the 16-month-long select committee stage of the End of Life Choice Bill, 39,000 public submissions were made, with 90% of submitters opposed to it. [10] Over one thousand doctors signed an open letter in mid-2019 saying that they "want no part in assisted suicide". [13]

The rules regarding campaigning for the referendum are generally the same as for the general election. All advertisements must carry a promoter statement, stating the name and physical address of the promoter. It is illegal to campaign on polling day, or within a 10-metre (33 ft) radius of an advance polling booth.

Unlike the general election, a preliminary count for the cannabis and euthanasia referendums was not conducted on election night (17 October 2020). Instead, the referendum votes was counted alongside the mandatory election recount. [15]

All voting papers, counterfoils and electoral rolls are returned to the electorate's returning officer for counting. During the count, the returning officer will approve and count any special votes, and compile a master electoral roll to ensure no-one has voted more than once. [16] Special votes include votes from those who enrolled after the deadline of 13 September, those who voted outside their electorate (this includes all overseas votes), voters in hospital or prison, and those voters enrolled on the unpublished roll. [17] To simplify processing and counting, overseas votes will be sent to and counted at the Electoral Commission's central processing centre in Wellington, rather than to electorate returning officers. [18]

Preliminary results for the referendums were released by the Electoral Commission on 30 October 2020. These results had 65.2% of people in support of the legislation. [19]

Following the counting of the 480,000 special votes, official results for the general election and referendums were released on 6 November. Based on the final results, 65.1% of people supported the legislation while 33.7% opposed it. [5]

ACT New Zealand, known simply as ACT, is a right-wing, classical-liberal political party in New Zealand. According to former party leader Rodney Hide, ACT's values are "individual freedom, personal responsibility, doing the best for our natural environment and for smaller, smarter government in its goals of a prosperous economy, a strong society, and a quality of life that is the envy of the world". Young ACT is an associated student wing.

Right to Life New Zealand is a Christchurch-based anti-abortion group. It broke away from the New Zealand Society for Protection of the Unborn Child in 2000 following disagreements between the Christchurch branch spokesperson Ken Orr and the national leadership over lobbying tactics. Besides opposing abortion, Right to Life NZ opposes euthanasia, sex education, and specific policies around LGBT issues. 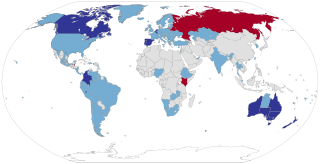 The legality of euthanasia varies depending on the country. Efforts to change government policies on euthanasia of humans in the 20th and 21st centuries have met limited success in Western countries. Human euthanasia policies have also been developed by a variety of NGOs, most notably medical associations and advocacy organizations. As of 2022, euthanasia is legal in Belgium, Canada, Colombia, Luxembourg, the Netherlands, New Zealand, Spain and several states of Australia. Euthanasia was briefly legal in the Northern Territory between 1996 and 1997, but was overturned by a federal law. In 2021, a Peruvian court allowed euthanasia for a single person, Ana Estrada.

Kanwaljit Singh Bakshi is an Indian-born New Zealand politician and a member of the National Party. He was a Member of Parliament as a list MP from the 2008 election to the 2020 election.

Euthanasia became legal in New Zealand when the End of Life Choice Act 2019 took full effect on 7 November 2021. It is illegal to "aid and abet suicide" under Section 179 of the New Zealand Crimes Act 1961. The clauses of this act make it an offence to "incite, procure or counsel" and "aid and abet" someone else to commit suicide, regardless of whether a suicide attempt is made or not. Section 179 covers both coercion to undertake assisted suicide and true suicide, such as that caused by bullying. This will not change under the End of Life Choices Act 2019, which has provisions on coercion of terminally ill people.

Lecretia Anne Seales was a New Zealand lawyer who, upon suffering a brain tumour and enduring treatments for it, became an advocate of physician-assisted dying.

Timothy John van de Molen is a New Zealand politician and Member of Parliament in the House of Representatives for the National Party.

Jo-Anne Marie Luxton is a New Zealand politician and a Member of Parliament in the House of Representatives for the Labour Party.

Jennifer Lyn Marcroft is a New Zealand politician and former Member of Parliament in the House of Representatives for the New Zealand First party.

Jamie Ross Strange is a New Zealand politician. He is a Member of Parliament in the House of Representatives for the Labour Party.

The End of Life Choice Act 2019 is an Act of Parliament in New Zealand that seeks to give people with a terminal illness the option of receiving assisted dying. The Ministry of Justice and Ministry of Health confirmed that, "The Bill uses “assisted dying” to refer to both euthanasia and assisted suicide. Euthanasia refers to a patient being administered a lethal drug by a medical practitioner. Assisted suicide refers to a patient receiving lethal drugs at their request, which they take by themselves."

Brooke Olivia van Velden is a New Zealand politician who has been a Member of Parliament since the 2020 general election for ACT New Zealand. She has been the party's deputy leader since June 2020. 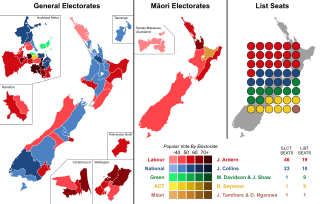 This article summarises results of the 17 October 2020 New Zealand general election, including both party vote and electorate vote outcomes.