Social determinism is the theory that social interactions and constructs alone determine individual behavior (as opposed to biological or objective factors).

Consider certain human behaviors, such as committing murder, or writing poetry. A social determinist would look only at social phenomena, such as customs and expectations, education, and interpersonal interactions, to decide whether or not a given person would exhibit any of these behaviors. They would discount biological and other non-social factors, such as genetic makeup, the physical environment, etc. Ideas about nature and biology would be considered to be socially constructed.

The socially determined actions of an individual can be influenced by forces that control the flow of ideas. By creating an ideology within the society of the individual, the individual's actions and reactions to stimuli are predetermined to adhere to the social rules imposed on him/her. Ideologies can be created using social institutions such as schooling, which "have become the terrain upon which contending forces express their social and political interest", [1] or the mass media, which has "significant power in shaping the social agenda and framing of public opinion to support that agenda". [2]

By creating a social construction of reality, these forces directly create a hegemonic control over the future of individuals who feel like the social construct is natural and therefore unchangeable. Their actions become based in the context of their society so that, even if they possess an innate talent for a sport, if the social construction implies that their race is unathletic in general, or their nation or state does not produce athletes, they do not include the possibility of athleticism in their future. Their society has successfully determined their actions.

Social determinism can favor a political party's agenda by setting social rules so that the individual considers the party's agenda to be morally correct, an example being the 2010 G20 summit riots in Toronto. The media, controlled by corporations and the governments with agendas of their own, publicizes the riots as violent and dangerous, but the goal of the rioters, to rebel against those whose position in power enables them to abuse the system for personal gain, is lost because the focus is on the violence. The individuals' view on the subject are then directly influenced by the media and their reactions are predetermined by that social form of control. "We have been taught to think that censorship is the main mechanism of how the media uses information as a form of social control, but in fact what is said, and how it is selectively presented, is a far more powerful form of information control." [2]

Social determinism was first studied by Emile Durkheim (1858 - 1917), French philosopher considered as the father of the social science.

In her book Technoculture Leila Green examines in detail the workings of a social determinist perspective, and argues “social processes determine technology for social purposes”. [3] She claims that every technological development throughout history was born of a social need, be this need economical, political or military. [3]

Thus social determinists perceive that technological development is not only determined by the society in which it occurs, but that it is inevitably shaped by the power structures that exist in that society. [3]

Social pre-wiring deals with the study of fetal social behavior and social interactions in a multi-fetal environment. Specifically, social pre-wiring refers to the ontogeny of social interaction. Also informally referred to as, "wired to be social." The theory questions whether there is a propensity to socially oriented action already present before birth. Research in the theory concludes that newborns are born into the world with a unique genetic wiring to be social. [4]

Circumstantial evidence supporting the social pre-wiring hypothesis can be revealed when examining newborns' behavior. Newborns, not even hours after birth, have been found to display a preparedness for social interaction. This preparedness is expressed in ways such as their imitation of facial gestures. This observed behavior cannot be contributed to any current form of socialization or social construction. Rather, newborns most likely inherit to some extent social behavior and identity through genetics. [4]

Principal evidence of this theory is uncovered by examining Twin pregnancies. The main argument is, if there are social behaviors that are inherited and developed before birth, then one should expect twin foetuses to engage in some form of social interaction before they are born. Thus, ten foetuses were analyzed over a period of time using ultrasound techniques. Using kinematic analysis, the results of the experiment were that the twin foetuses would interact with each other for longer periods and more often as the pregnancies went on. Researchers were able to conclude that the performance of movements between the co-twins were not accidental but specifically aimed. [4]

The social pre-wiring hypothesis was proved correct, "The central advance of this study is the demonstration that 'social actions' are already performed in the second trimester of gestation. Starting from the 14th week of gestation twin foetuses plan and execute movements specifically aimed at the co-twin. These findings force us to predate the emergence of social behavior: when the context enables it, as in the case of twin foetuses, other-directed actions are not only possible but predominant over self-directed actions." [4]

Sociobiology is a field of biology that aims to examine and explain social behavior in terms of evolution. It draws from disciplines including psychology, ethology, anthropology, evolution, zoology, archaeology, and population genetics. Within the study of human societies, sociobiology is closely allied to Darwinian anthropology, human behavioral ecology and evolutionary psychology. 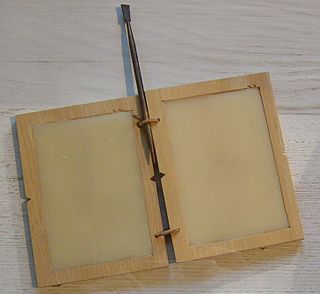 Tabula rasa is the theory that individuals are born without built-in mental content and that therefore all knowledge comes from experience or perception. Epistemological proponents of tabula rasa disagree with the doctrine of innatism which holds that the mind is born already in possession of certain knowledge. Generally, proponents of the tabula rasa theory also favour the "nurture" side of the nature versus nurture debate when it comes to aspects of one's personality, social and emotional behaviour, knowledge and sapience.

The nature versus nurture debate involves whether human behavior is determined by the environment, either prenatal or during a person's life, or by a person's genes. The alliterative expression "nature and nurture" in English has been in use since at least the Elizabethan period and goes back to medieval French.

In sociology, socialization is the process of internalizing the norms and ideologies of society. Socialization encompasses both learning and teaching and is thus "the means by which social and cultural continuity are attained".

Determinism is the philosophical belief that all events are determined completely by previously existing causes. Deterministic theories throughout the history of philosophy have sprung from diverse and sometimes overlapping motives and considerations. The opposite of determinism is some kind of indeterminism or randomness. Determinism is often contrasted with free will.

Biological determinism, also known as genetic determinism is the belief that human behaviour is directly controlled by an individual's genes or some component of their physiology, generally at the expense of the role of the environment, whether in embryonic development or in learning. Genetic reductionism is a similar concept, but it is distinct from genetic determinism in that the former refers to the level of understanding, while the latter refers to the supposedly causal role of genes. Biological determinism has been associated with movements in science and society including eugenics, scientific racism, and the debates around the heritability of IQ, the basis of sexual orientation, and sociobiology. 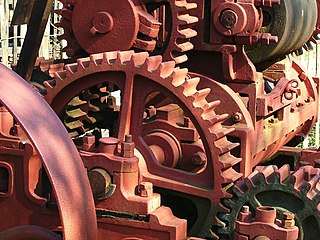 Cultural determinism is the belief that the culture in which we are raised determines who we are at emotional and behavioral levels. It contrasts with genetic determinism, the theory that biologically inherited traits and the environmental influences that affect those traits dominate who we are.

Not in Our Genes: Biology, Ideology and Human Nature is a 1984 book by the evolutionary geneticist Richard Lewontin, the neurobiologist Steven Rose, and the psychologist Leon Kamin, in which the authors criticize sociobiology and genetic determinism and advocate a socialist society.

Technophilia refers generally to a strong enthusiasm for technology, especially new technologies such as personal computers, the Internet, mobile phones, and home cinema. The term is used in sociology to examine individuals' interactions with society and is contrasted with technophobia.

Technoculture is a neologism that is not in standard dictionaries but that has some popularity in academia, popularized by editors Constance Penley and Andrew Ross in a book of essays bearing that title. It refers to the interactions between, and politics of, technology and culture.

Media psychology is the branch and specialty field in psychology that focuses on the interaction human behavior and media and technology. Media psychology is not limited to mass media or media content; it includes all forms of mediated communication and media technology-related behaviors, such as the use, design, impact and sharing behaviors. This branch is a relatively new field of study because of advancement in technology. It uses various methods of critical analysis and investigation to develop a working model of a user's perception on media experience. These methods are used for society as a whole and on an individual basis. Media psychologists are able to perform activities that include consulting, design, and production in various media like television, video games, films, and news broadcasting. Media psychologists are not considered to be those who are featured in media, rather than those who research, work or contribute to the field.

There are several approaches to defining the substance and scope of technology policy.

Lelia Green is an professor at the School of Arts and Humanities at Edith Cowan University, Perth. Green is the author of Technoculture: From Alphabet to Cybersex and the editor of Framing Technology: Society, Choice and Change, and also on the editorial board of the Australia Journal of Communication and Media International Australia Incorporating Culture and Policy.