The spark-ignition petrol engines listed below were formerly used by various marques of automobiles and commercial vehicles of the German automotive concern, Volkswagen Group, [1] and also in Volkswagen Industrial Motor applications, but are now discontinued. All listed engines operate on the four-stroke cycle, and unless stated otherwise, use a wet sump lubrication system, and are water-cooled. [1]

Since the Volkswagen Group is European, official internal combustion engine performance ratings are published using the International System of Units (commonly abbreviated "SI"), a modern form of the metric system of figures. Motor vehicle engines will have been tested by a Deutsches Institut für Normung (DIN) accredited testing facility, to either the original 80/1269/ EEC , or the later 1999/99/EC standards.[ citation needed ] The standard initial measuring unit for establishing the rated motive power output is the kilowatt (kW);[ citation needed ] and in their official literature, the power rating may be published in either the kW, or the 'Pferdestärke' (PS, which is sometimes incorrectly referred to as 'metric horsepower'), or both, and may also include conversions to imperial units such as the horsepower (hp) or brake horsepower (bhp). (Conversions: one PS ≈ 735.5 watts (W), ≈ 0.98632 hp (SAE)). In case of conflict, the metric power figure of kilowatts (kW) will be stated as the primary figure of reference. For the turning force generated by the engine, the Newton metre (Nm) will be the reference figure of torque. Furthermore, in accordance with European automotive traditions, engines shall be listed in the following ascending order of preference:[ citation needed ]

The Volkswagen air-cooled engine was introduced in 1935 in Germany, produced in factories all over the world, and the last complete engine was produced in December 2005, Its production was ceased by anti-pollution laws and the last engine was produced in São Bernardo do Campo. Its air-cooled, four-cylinder, boxer configuration was unique in its day for a production automobile, but has gone on to power millions of vehicles around the world, being considered[ by whom? ] one of the most reliable automotive engines of all eras.

The Volkswagen wasserboxer was a horizontally opposed or 'boxer' water-cooled four cylinder petrol engine. It was introduced in 1982, and was produced for ten years, ending in 1992. The wasserboxer was only used in the Volkswagen Type 2 (T3) (T3 Transporter / Caravelle / Vanagon / T25).

The EA111 series of internal combustion engines was initially developed by Audi under Ludwig Kraus leadership and introduced in the mid-1970s in the Audi 50, and shortly after in the original Volkswagen Polo. It is a series of water-cooled inline three- and inline four-cylinder petrol and diesel engines, in a variety of displacement sizes. This overhead camshaft engine features a crossflow cylinder head design, and directly driven auxiliary units.[ clarification needed ] The exhaust side is in driving direction, closest to the front of the vehicle.

This engine was originally developed by Škoda Auto, before the company was acquired by Volkswagen Group, and is therefore NOT an EA111 engine. However, this engine was used in some VWs after the takeover.

This engine entered production in November 1996, after supplies of the Ford-built 1.0 had dried up. It was called the AT-1000 by Volkswagen do Brasil. [2]

This engine was originally developed by Škoda Auto, before the company was acquired by Volkswagen Group, and is therefore NOT an EA111 engine. However, this engine was used in some Škodas after the takeover.

This engine was originally developed by Škoda Auto, before the company was acquired by Volkswagen Group, and is therefore NOT an EA111 engine. However, this engine was used in some Škodas after the takeover.

This is a naturally aspirated version of the 1.8 R4 20vT.

This engine was designed by Audi for sole use in the Volkswagen LT. Other versions of this engine were installed in cars as diverse as the Porsche 924 and the AMC Gremlin.

This engine was sometimes badged as a "V5".

This 2.4 V6 is a smaller version of the all-alloy 3.2 V6 FSI – without the variable intake manifold and the FSI direct injection.

Based on the Audi B5 S4 2.7 V6 biturbo, this engine was tuned by Cosworth Technology (now MAHLE Powertrain), and featured enlarged intake and exhaust ports on the cylinder heads, two uprated parallel turbochargers, and two side-mounted intercoolers (SMICs), together with new induction and exhaust systems, and a re-calibrated engine management system. Due to the high performance nature of the vehicle, it was also fitted with a multi-baffled two-section oil sump to help prevent oil starvation during high g-force manoeuvres.

All Volkswagen Group V8 and W8 petrol engines are constructed from a lightweight, cast aluminium alloy cylinder block (crankcase) and cylinder heads. They all use multi-valve technology, with the valves being operated by two overhead camshafts per cylinder bank (sometimes referred to as 'quad cam'). All functions of engine control are carried out by varying types of Robert Bosch GmbH Motronic electronic engine control units. They are all longitudinally front-mounted, and the V8 engines listed below were for a long time only used in cars bearing the Audi marque, but latterly being installed in Volkswagen Passenger Cars flagship Volkswagen Phaeton.

The 'W8' badged engine is an eight-cylinder W engine of four banks of two cylinders, formed by joining two 15° VR4 engines, placed on a single crankshaft, with each cylinder 'double-bank' now at a 72° vee-angle.

was voted 'best technical innovation', and awarded the "Golden Pegasus" by "Za ruljom" at the Moscow Motor Show

Only the third engine developed by Automobili Lamborghini S.p.A., and the first since Lamborghini was acquired by AUDI AG, this engine shares many technologies with other Audi-developed engines, although it is not directly based on any existing designs. It is constructed in two distinct stages: all components within the cylinder block and crankcase are built up at the Audi Hungaria Motor Kft. factory in Győr, with final assembly being completed at Sant'Agata Bolognese.

This was a legacy engine, an original 3.5 litre version was developed nearly 50 years before the takeover of Automobili Lamborghini S.p.A. by the German Volkswagen Group subsidiary AUDI AG. The current 6.2 and 6.5 litre versions can trace their lineage to the original. The final model to use this was the Murciélago, which was released during the current VW Group ownership, developed with help from Audi. 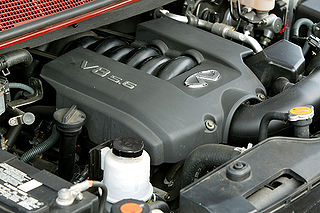 The VK engine is a V8 piston engine from Nissan. It is an aluminum DOHC 4-valve design. 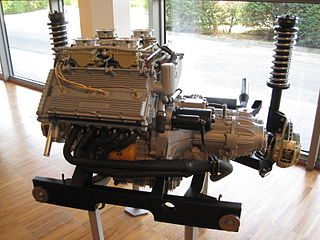 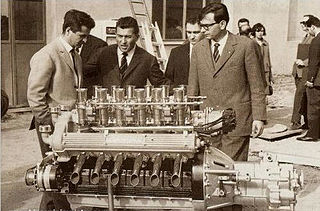 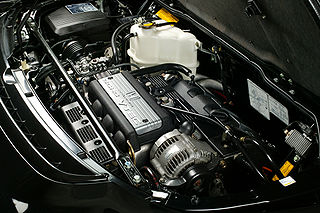 Honda's first production V6 was the C series; it was produced in displacements from 2.0 to 3.5 liters. The C engine was produced in various forms for over 20 years (1985–2005), having first been used in its then new Legend model, and its British sister car the Rover 800-series.

The Honda D series inline-four cylinder engine is used in a variety of compact models, most commonly the Honda Civic, CRX, Logo, Stream, and first-generation Integra. Engine displacement ranges between 1.2 and 1.7 liters. The D Series engine is either SOHC or DOHC, and might include VTEC variable valve timing. Power ranges from 66 PS (49 kW) in the Logo to 130 PS (96 kW) in the Civic Si. D-series production commenced 1984 and ended 2005. D-series engine technology culminated with production of the D15B 3-stage VTEC (D15Z7) which was available in markets outside of the United States. Earlier versions of this engine also used a single port fuel injection system Honda called PGM-CARB, signifying the carburetor was computer controlled. 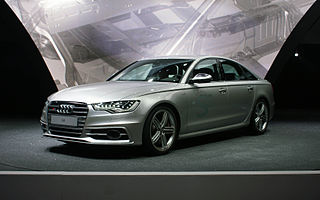 The Toyota S Series engines are a family of straight-4 petrol or CNG engines with displacement from 1.8 L to 2.2 L produced by Toyota Motor Corporation from January 1980 to August 2007. The series has cast iron engine blocks and alloy cylinder heads. 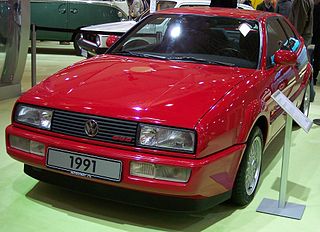 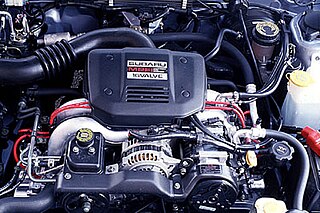 The Subaru EJ engine is a series of four-stroke automotive engines manufactured by Subaru. They were introduced in 1989, intended to succeed the previous Subaru EA engine. The EJ series is the mainstay of Subaru's engine line, with all engines of this series being 16-valve horizontal flat-fours, with configurations available for single, or double-overhead camshaft arrangements. Naturally aspirated and turbocharged versions are available, ranging from 96 to 320 hp. These engines are commonly used in light aircraft, kit cars and engine swaps into air-cooled Volkswagens, and are also popular as a swap into copy wasserboxer engined Volkswagen T3/Vanagon . Primary engineering on the EJ series was done by Masayuki Kodama, Takemasa Yamada and Shuji Sawafuji of Fuji Heavy Industries, Subaru's parent company.

The Subaru EA engine is a series of automobile internal combustion engines manufactured by Subaru, a division of Fuji Heavy Industries. All EA series engines are of a flat-4 design, and have always been water cooled. 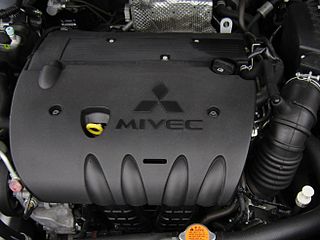 The Mitsubishi 4B1 engine is a range of all-alloy straight-4 piston engines built at Mitsubishi's Japanese "World Engine" powertrain plant in Shiga on the basis of the Global Engine Manufacturing Alliance (GEMA). Although the basic designs of the various engines are the same, their exact specifications are individually tailored for each partner. The cylinder block and other basic structural parts of the engine were jointly developed by the GEMA companies, but the intake and exhaust manifolds, the cylinder head's intake and exhaust ports, and other elements related to engine tuning were independently developed by Mitsubishi.

The EA827 family of petrol engines was initially developed by Audi under Ludwig Kraus leadership and introduced in 1972 by the B1-series Audi 80, and went on to power many Volkswagen Group models. This is a very robust water-cooled engine configuration for four- up to eight- cylinders, and is still in production. In Brasil this engine is produced under name Volkswagen AP AP.

The VR5 engines are a family of gasoline Internal combustion engines developed by the Volkswagen Group and produced from 1997 to 2006. They are derived from the VR6 engine family, also developed by Volkswagen, but with one less cylinder. VR5 engines are narrow-angle V5 petrol engines, with a V angle of 15° and a displacement of 2,324 cc. The VR5 was the first production block to use five cylinders in a V design with a 15-degree angle. 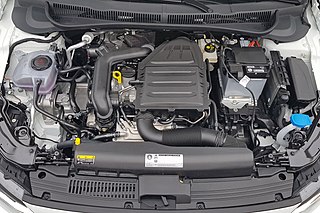