The 700 series (700系, Nanahyaku-kei) is a Japanese Shinkansen high-speed train type built between 1997 and 2006, and entering service in 1999. Originally designated as "N300" during the development phase, they formed the next generation of shinkansen vehicles jointly designed by JR Central and JR-West for use on the Tokaido Shinkansen, Hakata Minami Line and the San'yō Shinkansen. Though it has since been withdrawn from service on the Tōkaidō Shinkansen, it still operates on the San'yō Shinkansen and Hakata Minami Line.

The 700 series is characterized by its flat 'duck-bill' nose designed to reduce the piston effect as the trains enter tunnels. 16-car units are painted white with blue stripes beneath the windows, and are used for Nozomi , Hikari , and Kodama services on the Tokaido and San'yō Shinkansen lines, while 8-car units used for the San'yō Shinkansen Hikari Rail Star services have a darker livery (grey with black window areas and a yellow stripe beneath the windows) which also acts to visually deemphasize the units' nose area, resulting in a more streamlined impression.

The pre-series set, C0, was delivered in October 1997, and underwent endurance running mainly between Tokyo and Shin-Osaka until early 1999, including a short period of testing as an 8-car formation on the Sanyo Shinkansen. New single-arm current collectors were fitted from the start, and these initially featured the distinctive "wine-glass" pantograph shrouds of the 300X train. These were later changed to a design resembling the 500 series arrangement with additional side fences, which was used on the subsequent production trains. Unit C0 was modified to full production standard in September 1999 and renumbered as C1, and was officially withdrawn in January 2013.

These units were ordered by JR Central for use on Tokyo to Hakata Nozomi services, displacing the 300 series trains previously used on these services. Interior layout and accommodation is similar to that of the 300 series trains, with three Green class (first class) vehicles, and the same 1,040 mm seat pitch in standard class, and 1,160 mm in Green class. The central gangways were widened by 30 mm to 600 mm, and ceilings were raised by 65 mm to 2,200 mm. The refreshment counters of the 300 and 500 series trains were discontinued and replaced by vending machines selling drinks, located in cars 3, 7, 11, and 15.

Specifications permit 285 km/h running on the Sanyo Shinkansen with speed restricted to 270 km/h on the Tokaido Shinkansen between Tokyo and Shin-Osaka. The initial batch ordered by JR Central consisted of 17 units, with the first 4 units delivered in time for introduction on three daily return Nozomi services from March 1999. Services featuring 700 series stock were increased to five daily from July 1999, and further increased from October 1999. With continuing deliveries, 700 series trains were also introduced on Tōkaidō Shinkansen Hikari services from late 2000.

Set numbers C25 onwards introduced from May 2001 incorporate minor interior design improvements, including power outlets at the ends of cars for PC users, and hand-grabs on the edge of aisle seats. An order for an additional batch of six units was placed by JR Central in December 2003, with delivery scheduled for the end of 2004. These sets (C55 to C60) provided additional capacity for services connected with the Aichi Expo in 2005.

Before entering passenger service, JR Central set C46 was used on a series of test runs from late January 2003 fitted with streamlined bogie covers on all cars and flush diaphragm covers between cars 16/15 and 15/14. These modifications were removed before the unit entered revenue service. Flush diaphragm covers were used on future trains, such as the N700 series.

Cars 5 and 12 each have one single-arm pantograph.

These are the units owned by JR-West for use on through Hikari services from Tokyo, displacing the 100 series stock previously used on these services. A total of 15 units were delivered from June 2001 to January 2006. These trains use the same bogies as the JR-West 500 series sets. Other differences include LED destination indicator panels, white pantograph side fences, "JR 700" logos on the cab sides, and also different seat designs.

Cars 5 and 12 each have one single-arm pantograph.

8-car E units were introduced by JR-West for use on new limited-stop Sanyo Shinkansen Hikari Rail Star services between Shin-Osaka and Hakata from 11 March 2000, replacing the former 0 series West Hikari services. The first units were delivered at the beginning of December 1999, with a total of 16 units built. Externally, these units differ noticeably from their JR Central sisters in having a variation of the 500 series livery with the blue waistline band replaced by a band of "sunny yellow". "Rail Star" logos are applied to the sides of alternate cars as well as on the cab sides. Each 8-car train has two single-arm pantographs of a similar design to the JR Central 16-car sets. It was originally planned that sets would be able to operate coupled together, enabling 16-car formations to be run in busy periods, but this feature has never been utilized. With the discontinuation of Hikari services running solely on the San'yo Shinkansen, replaced by Sakura services from 2011, these sets are primarily used on Kodama services between Shin-Osaka and Hakata. [9]

Cars 2 and 7 each have one single-arm pantograph.

The trains feature four 4-seat compartments in car 8, and the seats at the ends of each car have power supply outlets for mobile PC users. Unlike the 0 series SK sets which they replaced, these sets are completely monoclass without Green class accommodation. However, the five reserved standard class cars, cars 4 to 8, have club class style 2+2 abreast seating compared to the normal 2+3 seating arrangement in the non-reserved cars. Seat pitch is 1,040 mm (41 in) throughout. Car 4 was also designated as a "Silence car", in which onboard announcements were omitted, but this was discontinued from March 2011. [9]

The annual totals for the fleet sizes (number of vehicles as of 1 April each year) owned by JR Central and JR West are as follows. [10] 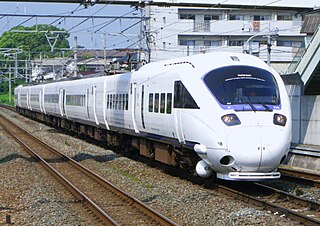 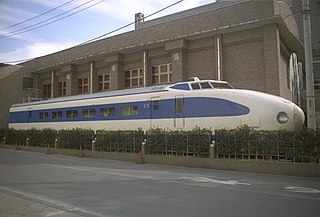