Kentucky's 1st congressional district is a congressional district in the U.S. state of Kentucky. Located in Western Kentucky, the district takes in Henderson, Hopkinsville, Madisonville, Paducah and Murray. The district is represented by Republican James Comer who won a special election to fill the seat of Rep. Ed Whitfield who resigned in September 2016. Comer also won election to the regular term to begin January 3, 2017.

Until January 1, 2006, Kentucky did not track party affiliation for registered voters who were neither Democratic nor Republican. [6] The Kentucky voter registration card does not explicitly list anything other than Democratic Party, Republican Party, or Other, with the "Other" option having a blank line and no instructions on how to register as something else. [7] 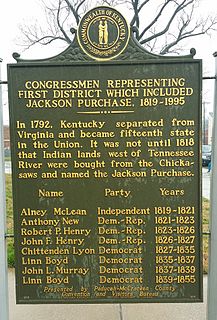 North Carolina's 2nd congressional district is located in the central part of the state. The district contains most of Wake County. Prior to court-mandated redistricting in 2019, it also included northern Johnston County, southern Nash County, far western Wilson County, and all of Franklin and Harnett counties. The 2nd district has been represented by Democratic Rep. Deborah Ross since 2021.

Missouri's second congressional district is in the eastern portion of the state, primarily consisting of the suburbs south and west of St. Louis, including Arnold, Town and Country, Wildwood, Chesterfield, and Oakville. The district includes portions of St. Louis, Jefferson and St. Charles counties. Following redistricting in 2010, the St. Louis Post-Dispatch reported that the district now included more Democratic-leaning voters than it had its 2001–2010 boundaries, but still leaned Republican as a whole. The latest U.S. Census Electorate Profile for the 2nd congressional district estimates there are 581,131 citizens of voting age living in 293,984 households.

The 7th congressional district of Illinois covers parts of Cook County, as of the 2011 redistricting that followed the 2010 census. All or parts of Bellwood, Chicago, Forest Park, Oak Park, Maywood, and Westchester are included. Democrat Danny K. Davis has represented the district since January 1997. With a Cook Partisan Voting Index rating of D+37, it is the most Democratic district in Illinois.

North Carolina's eighth congressional district is a United States congressional district that comprises a large portion of the southern Piedmont area of North Carolina from Concord to Spring Lake, including China Grove, Albemarle, Troy, Pinehurst and Raeford. The district includes all of Cabarrus County, Montgomery County, Moore County, Hoke County and Stanly County, as well as portions of Rowan County and Cumberland County.

North Carolina's 5th congressional district covers the central western portion of North Carolina from the Appalachian Mountains to the Metrolina western suburbs. the district borders Tennessee, Virginia and South Carolina While the bulk of its territory is in the mountains it stretches south into the Piedmont where its largest city, Gastonia, can be found. The district is overwhelmingly Republican. Large portions were controlled by Republicans even during the “Solid South” era as much of northwestern North Carolina was Quaker or mountaineer and therefore resisted secession. Two counties in the district – Avery and Yadkin – have never voted for a Democratic presidential candidate since their creation, and Wilkes County has never done so since before the Second Party System. For the 2020 election the district has been updated per House Bill 1029 enacted by the NC General Assembly on November 15, 2019, becoming Session Law 2019–249. District boundaries are based on 2010 census tabulation blocks.