Chromium(III) iodide, also known as chromium triiodide, is an inorganic compound with the formula CrI3. It is a black solid that is used to prepare other chromium iodides. [2]

Chromium triiodide is prepared by the direct reaction of chromium metal with an excess of iodine. The reaction is conducted at 500 °C:

To obtain high purity samples, the product is thermally decomposed at 700 °C to sublime out chromium(II) iodide. The diiodide is then reiodinated. [2]

Chromium triiodide is stable in contact with oxygen and moisture, but at temperatures approaching 200 °C it reacts with oxygen and releases iodine. Like CrCl3, the triiodide exhibits slow solubility in water owing to the kinetic inertness of Cr(III). Addition of small amounts of chromous iodide accelerates the dissolving process. [2]

Chromium triiodide can also be prepared as nanoplatelets from the alkoxide Cr(OCMetBu2)3. [4]

Chromium triiodide was one of the first materials which was discovered to be a magnetic two-dimensional material that has great potentials for spintronics devices. [5] 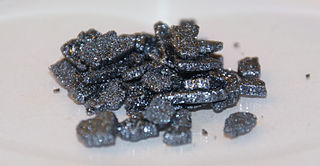 Iodine is a chemical element with the symbol I and atomic number 53. The heaviest of the stable halogens, it exists as a semi-lustrous, non-metallic solid at standard conditions that melts to form a deep violet liquid at 114 °C (237 °F), and boils to a violet gas at 184 °C (363 °F). The element was discovered by the French chemist Bernard Courtois in 1811 and was named two years later by Joseph Louis Gay-Lussac, after the Ancient Greek Ιώδης 'violet-coloured'. 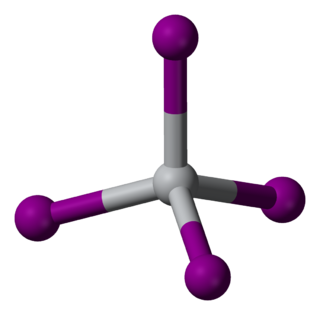 Titanium tetraiodide is an inorganic compound with the formula TiI4. It is a black volatile solid, first reported by Rudolph Weber in 1863. It is an intermediate in the van Arkel–de Boer process for the purification of titanium.

Vanadium(III) iodide is the inorganic compound with the formula VI3. This paramagnetic solid is generated by the reaction of vanadium powder with iodine at around 500 °C. The black hygroscopic crystals dissolve in water to give green solutions, characteristic of V(III) ions.

Uranium(IV) iodide, also known as uranium tetraiodide, is an inorganic chemical compound. It is a salt of uranium in oxidation state +4 and iodine.

Half sandwich compounds, also known as piano stool complexes, are organometallic complexes that feature a cyclic polyhapto ligand bound to an MLn center, where L is a unidentate ligand. Thousands of such complexes are known. Well-known examples include cyclobutadieneiron tricarbonyl and (C5H5)TiCl3. Commercially useful examples include (C5H5)Co(CO)2, which is used in the synthesis of substituted pyridines, and methylcyclopentadienyl manganese tricarbonyl, an antiknock agent in petrol.

Molybdenum(III) iodide is the inorganic compound with the formula MoI3.

Chromium telluride (Cr2Te3) is an inorganic chemical compound. It is composed of the chromium(III) cation and the telluride anion. It has a shadowy gray color, and has a hexagonal crystal structure.

Neodymium(III) iodide is an inorganic salt of iodine and neodymium the formula NdI3. Neodymium uses the +3 oxidation state in the compound. The anydrous compound is a green powdery solid at room temperature.

Lutetium(III) iodide or lutetium iodide is an inorganic compound consisting of iodine and lutetium, with the chemical formula of LuI3.

Holmium(III) iodide is an iodide of holmium, with the chemical formula of HoI3. It is used as a component of metal halide lamps.