Last updated August 11, 2020
This article is about the district. For its eponymous headquarters, see Kota, Rajasthan.
District of Rajasthan in India

Kota District is a district of the state of Rajasthan in western India. The city of Kota is the administrative headquarters of the district.

During the period around 12th century AD, Rao Deva, a Hada Chieftain conquered the territory and founded Bundi and Hadoti. In the early 17th century AD, during the reign of the Mughal Emperor Jahangir, the ruler of Bundi -Rao Ratan Singh, gave the smaller principality of Kota to his son, Madho Singh. Since then Kota became a hallmark of the Rajput gallantry and culture. In Pre Independence days social activist Guru Radha Kishan worked here along with other prominent freedom fighters and organised people against insane policies of the government. He left Kota after local administration came to know about the arrest warrant issued against him for his activities for freedom movement.

The district is bounded on the north by Bundi District, on the east by Baran District, on the south by Jhalawar District, and on the west by Chittorgarh District. It is renowned for its IIT JEE preparation as well as medical exams preparation . It is now the hub of educational institutions and is home to Asia's biggest manufacturer of fertilizer. 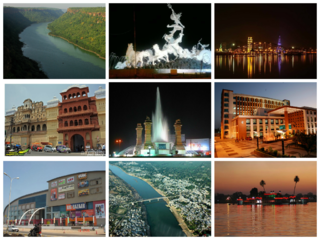 Kota previously known as Kotah, is a city located in the southeast of northern Indian state of Rajasthan. It is located about 240 kilometres (149 mi) south of the state capital, Jaipur, situated on the banks of Chambal River. With a population of over 1.2 million, it is the third most populous city of Rajasthan after Jaipur and Jodhpur, 46th most populous city of India and 53rd most populous urban agglomeration of India. It serves as the administrative headquarters for Kota district and Kota division. Kota is a major coaching hub of the country for competitive examination preparations and has a number of engineering and medical coaching institutes. Books like Life in a Nutshell by Nitish Rajpurohit and Harsh Agarwal highlight the life of students in the city.

Chittorgarhpronunciation (help·info) is a major city in Rajasthan state of western India. It lies on the Berach River, a tributary of the Banas, and is the administrative headquarters of Chittorgarh District and a former capital of the Sisodia Rajput Dynasty of Mewar. The city of Chittaurgarh is located on the banks of river Gambhiri and Berach.

Hadoti is a region of Rajasthan state in western India, which was once called the Bundi Kingdom. The biggest cities are Baran and Kota. It includes the districts of Bundi, Baran, Jhalawar and Kota and is bounded on the west by the Mewar, on the northwest by Ajmer regions of Rajasthan, and on the south by the Malwa, on the east by the Gird regions of Madhya Pradesh state.

Jhalawar is a city in the Indian state of Rajasthan. It is located in the southeastern location of the state. It was the capital of the former princely state of Jhalawar, and is the administrative headquarters of Jhalawar District. Jhalawar was once known as Brijnagar.

Bundi District is a district in the state of Rajasthan in western India. The town of Bundi is the district headquarters. It has an area of 5,550 km² and a population of 1,110,906. It is divided into 5 tehsils which are: Bundi, Hindoli, Nainwa, Keshoraipatan and Indergarh. 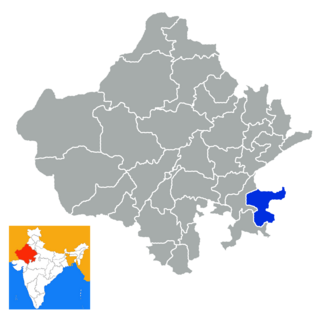 Baran district is a district in the Indian state of Rajasthan. The headquarters of the district are located at the city of Baran.

Aklera is a town and a municipality in Jhalawar district in the state of Rajasthan, India. It has a rock-strewn, scrub-covered terrain, occasionally bright with fields of poppies and citrus-green groves of oranges. Lying in the south-eastern region of Rajasthan at the edge of the Malwa plateau, Aklera area has rocky but water-laden verdant landscape, unlike much of Rajasthan.

Antah is a city and a municipality in Baran district in the state of Rajasthan, India.

Bijoliya Kalan is a census town in Bhilwara district in the state of Rajasthan, India.

Lakheri is a town and municipality in Bundi district in the Indian state of Rajasthan. It is located in the southeast of Rajasthan, around 180 kilometres (112 mi) south of the state capital, Jaipur. Lakheri has been a subdivision headquarters since 2002. Pramod Sharma (RAS) is the deputy collector and magistrate of Lakheri subdivision. It is the second largest city in the district, after Bundi and 104th largest city in rajasthan.

Nainwan is a tehsil of Bundi district and a municipality in the Hadoti region of the state of Rajasthan in India.

Rawatbhata is a city, tehsil and nager Nigam in Chittorgarh District, Rajasthan, India. It is 50km from the nearest city, Kota. The city has eight nuclear power stations, an under-construction nuclear fuel complex, and a heavy water plant. Rawatbhata also has one of the biggest dams in Rajasthan, Rana Pratap Sagar Dam, which is built on the Chambal River. The dam is equipped with a 172 MW hydroelectric power station.

Baran is a city in Baran district of the Indian state of Rajasthan. It is a municipality and the district headquarters of Baran district, famous for its 11th century Bhand Deva Temple on banks of Ramgarh crater. It is 339 km from the state capital Jaipur near Kota city. Three large rivers, Parban, Parbati, and Kalisindh, flow through the district.

The Jawahar Sagar Dam is the third dam in the series of Chambal Valley Projects on the Chambal River, located 29 km upstream of Kota city and 26 km downstream of Rana Pratap Sagar dam. It is a concrete gravity dam, 45 meters high and 393 meters long, generating 60 MW of power with an installed capacity of 3 units of 33 MW. Its construction was completed in 1972. The total catchment area of the dam is 27,195 km2, of which only 1,496 km2 are in Rajasthan. The free catchment area below Rana Pratap Sagar dam is 2,331 km2. The dam is located after the Gandhi Sagar Dam and Rana Pratap Sagar Dam, but before the Kota Barrage.

Rajasthan has many beautiful Nuha artistic and cultural traditions which reflect the ancient Indian way of life.

Rajgarh is a village in Sangod in Kota district in the Indian state of Rajasthan.