This is a list of airports in Colombia , grouped by type and sorted by location.

Ernesto Cortissoz International Airport is an airport serving the area of Barranquilla, the capital city of the Atlántico department in Colombia. The airport is located in the suburban municipality of Soledad. It owes its name to one of the pioneers of Colombian aviation, Ernesto Cortissoz.

El Dorado International Airport is an international airport serving Bogotá, Colombia and its surrounding areas. The airport is located mostly in the Fontibón district of Bogotá, although it partially extends into the Engativá district and the municipality of Funza in the Western Savanna Province of the Cundinamarca Department. In 2018, it served over 32.7 million passengers and 741,000 metric tons of cargo. This makes El Dorado the third busiest airport in Latin America in terms of passenger traffic, and the busiest in terms of cargo. El Dorado is also by far the busiest and most important airport in Colombia, accounting for just under half (49%) of the country's air traffic.

Germán Olano Airport is an airport serving Puerto Carreño, the capital of Vichada Department in Colombia. It is also known as Puerto Carreño Airport. The airport is 1.5 kilometres (0.93 mi) west of and parallels the Orinoco River, locally Colombia's border with Venezuela.

The Civil Aviation Authority of Colombia is a government agency of the Colombian Ministry of Transport. It is the agency in charge of regulating civil aviation, the aviation industry, and of managing the Colombian airspace. Aerocivil is also in charge of managing and controlling all of Colombia's public airports. It is headquartered in the new Aerocivil building on the property of El Dorado International Airport. Previously it was located on the fourth floor of the main terminal building of the airport.

The Special Administrative Unit of the Network of National Natural Parks of Colombia is Colombian central agency that manages all the national parks and protected areas.

Agoncillo is a town and municipality in La Rioja province in northern Spain.

Araracuara Airport is an airport serving Araracuara, in the Caquetá Department of Colombia. Araracuara was the site of a former penal colony for Colombia's worst and most dangerous criminals. 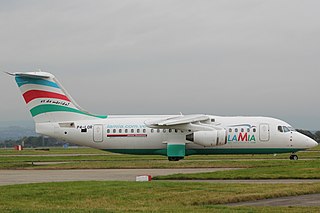 LaMia Flight 2933 was a charter flight of an Avro RJ85, operated by LaMia, that on 28 November 2016 crashed near Medellín, Colombia, killing 71 of the 77 people on board. The aircraft was transporting the Brazilian Chapecoense football squad and their entourage from Santa Cruz de la Sierra, Bolivia, to Medellín, where the team was scheduled to play at the 2016 Copa Sudamericana Finals. One of the four crew members, three of the players, and two other passengers survived with injuries.