CBS Sports Radio is owned by ViacomCBS and distributed by Westwood One. Programming on the network features reporters and personalities from CBS Sports, CBS Sports Network, and CBSSports.com. [2] CBS Sports Radio is broadcast throughout the United States on radio affiliates and streamed online. [5] [6] From launch until November 17, 2017, it was operated by CBS Radio until its merger with Entercom. Entercom, which later became Audacy, Inc., continued to manage the network under a licensing agreement with CBS. [7] The rights to the CBS logo, but not the name, expired at the end of 2019. [8]

CBS Sports Radio airs on more than 300 stations nationwide. The nominal flagship station of CBS Sports Radio is 660 WFAN and 101.9 WFAN-FM in New York City (although WFAN-AM-FM only carry some brief reports from the network); since WFAS shifted to conservative talk in 2021, [9] [10] New York City has had no full-time CBS Sports Radio affiliate. WFAS and WHLD were among numerous Cumulus Media stations that had been part of the network's core affiliates but flipped to conservative talk. [11] Audacy also distanced itself from the network when it shifted focus to its own in-house BetQL network, which focuses more on gambling, in 2021. [12] 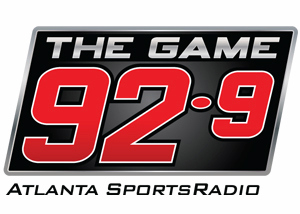 WZGC – branded 92.9 The Game – is a commercial sports radio station licensed to serve Atlanta, Georgia, covering the Atlanta metropolitan area. Owned by Audacy, Inc., WZGC is the Atlanta affiliate for CBS Sports Radio; the flagship station for the Atlanta Falcons and Atlanta Hawks radio networks; and the radio home of Hugh Douglas and Randy McMichael. The WZGC studios are located at Colony Square in Midtown Atlanta, while the station transmitter is located in Atlanta's North Druid Hills neighborhood. In addition to a standard analog transmission, WZGC broadcasts over one HD Radio channel, and is available online via Audacy.

WJFK-FM is a commercial radio station licensed to serve Manassas, Virginia, and serving the Washington metropolitan area. WJFK-FM airs a sports radio format and is owned and operated by Audacy, Inc..

Audacy, Inc. is a publicly traded American radio broadcasting company based in Philadelphia, Pennsylvania. Founded in 1968, it is the second largest radio company in the United States, owning 235 radio stations across 48 media markets.

KXST is a commercial AM radio station licensed to North Las Vegas, Nevada, and broadcasting to the Las Vegas metropolitan area. The station is owned by Audacy, Inc., and airs a sports gambling format, carrying programming from the BetQL network. The studios and offices are located in the unincorporated Clark County area of Spring Valley. In April 2018, KXST became the official Las Vegas affiliate of the Los Angeles Dodgers Radio Network.

KXSN is a commercial FM radio station in San Diego, California, branded as Sunny 98.1. Owned by Audacy, Inc., the station airs a classic hits radio format. The studios and offices are located in San Diego's Stonecrest area, off Granite Ridge Drive, across the street from rival station KMYI. The transmitter is off La Jolla Scenic Drive South in La Jolla, amid towers for several other San Diego FM and TV stations.

WJFK is a radio station broadcasting a sports gambling format. Licensed to the suburb of Morningside, Maryland with studios in Southeast DC in the Navy Yard neighborhood, it serves the Washington, D.C. metropolitan area. The station is owned by Audacy, Inc.

WKOX is a commercial AM radio station owned by the Delmarva Educational Association. It broadcasts a Spanish Christian format. The station is licensed to Everett, Massachusetts and targets Boston and its suburbs. It broadcasts from radio studios in Medford. The transmitter site is also in Medford at a separate location.

WKZV is a non-commercial Christian FM radio station licensed to Tybee Island, Georgia. The station is owned by the Educational Media Foundation, and serves the Savannah metropolitan area. Its transmitter is located west of the city in unincorporated Chatham County.

KFNQ is a commercial radio station in Seattle, Washington. It airs a sports radio format and is owned by iHeartMedia. KFNQ carries programming from Fox Sports Radio and CBS Sports Radio as a brand extension of sister station AM 950 KJR. The studios and offices are in the Belltown neighborhood northwest of Downtown Seattle.

KQPS is a commercial radio station that is licensed to Palm Desert, California, United States and serves the Palm Springs—Coachella Valley radio market. The station is owned by Audacy, Inc. KQPS's transmitter is off Varner Road in Cathedral City, amid other Palm Springs-area FM and TV towers.

KIKK is a daytime-only station, licensed to Pasadena, which broadcasts a sports gambling format under ownership of Audacy, Inc.. Its studios are located in the Greenway Plaza district of Houston, and its transmitter is located in Pasadena. While it only broadcasts during daytime hours at 250 watts, KIKK's low dial position gives the station a large coverage area, stretching from Flatonia, Texas to the west, and past Lake Charles, Louisiana to the east.

WHLD is an AM radio station licensed to Niagara Falls, New York carrying a conservative talk format from Westwood One. The station resides at 1270 kHz on the dial and is owned by Cumulus Media. The station's transmitter is located in Hamburg, New York, and studios are located in Buffalo with its Cumulus Media sister stations. It also is heard streaming on the stations website and its own "Talk 1270" app.

KAMP – branded 1430 AM The Bet – is a commercial sports radio station licensed to Aurora, Colorado, and serving the Denver metropolitan area. Owned by Audacy, Inc., the station's format focuses on sports betting, and is the market affiliate for CBS Sports Radio and the BetQL Network. The KAMP studios located in the Denver Tech Center, while the transmitter is located in nearby Highlands Ranch, near Colorado State Highway 470. In addition to a standard analog transmission, KAMP is also available on the second HD subchannel of KQMT, and is available online via Audacy.

WHLL – branded 98.1 Hall of Fame Country – is a commercial country music radio station licensed to Springfield, Massachusetts. Owned by Audacy, Inc., the station serves the Springfield metropolitan area; and the Pioneer Valley of Western Massachusetts; and is also the Springfield affiliate for Westwood One's Nash Icon format, the New York Yankees Radio Network and the Boston Bruins Radio Network. The WHLL studios are located at the Naismith Memorial Basketball Hall of Fame in Springfield, while the station transmitter resides in Springfield's Brightwood neighborhood. In addition to a standard analog transmission, WHLL simulcasts over low-power analog Springfield translator W251CT (98.1 FM), and streams online via Audacy.

WNBM is a radio station licensed to Bronxville, New York. The station features an urban adult contemporary format and is owned by Cumulus Media. WNBM's transmitter is located on the campus of Montefiore Medical Center in the Bronx, with its antenna atop the Montefiore II dormitory tower.

WFAS is a commercial digital-only radio station licensed to serve White Plains, New York. The station is owned by Cumulus Media and broadcasts at 1,000 watts from a transmitter site on Secor Road, in Hartsdale, New York. On weekdays, WFAS airs a conservative talk radio format with programming from Westwood One, which is itself distributed and partially owned by Cumulus Media. News updates are supplied by USA Radio News. On weekends, WFAS carries CBS Sports Radio programming.

WNSH is a radio station that is licensed to Newark, New Jersey and serves the New York City area. The station is owned by Audacy, Inc. WNSH's studios are located in the combined Audacy facility in the Hudson Square neighborhood of Manhattan, and its transmitter is located in West Orange, New Jersey.

Nash is a media brand owned by Cumulus Media. It covers country music-related properties owned by Cumulus, including radio stations, digital properties and publications, Nash TV, concerts promoted by Nash FM stations, and associated programming syndicated by Westwood One—including The Ty Bentli Show, Nash Nights Live with Shawn Parr and The Blair Garner Show. The Lia Show, which has been separately syndicated by Westwood One in the evening hours, will replace Garner in August 2020. Its name comes from Nashville, Tennessee, the center of the commercial country music industry in the United States, which in turn was named for colonial-era politician and Continental Army General Francis Nash.

The following is a list of events affecting radio broadcasting in 2017. Events listed include radio program debuts, finales, cancellations, and station launches, closures and format changes, as well as information about controversies.

The following is a list of events affecting radio broadcasting in 2021. Events listed include radio program debuts, finales, cancellations, and station launches, closures and format changes, as well as information about controversies.