The center of population of Arizona is located in Maricopa County, [7] which contains over 61% of Arizona's population. [8]

The state has the third highest number (and the sixth highest percentage) of Native Americans of any state in the Union. 286,680 were estimated to live in Arizona, representing more than 10% of the country's total Native American population of 2,752,158. Only California and Oklahoma [11] have more Native Americans. The perimeters of Phoenix, Tucson, Prescott, Flagstaff and Yuma border on Native American reservations.

The largest ancestry groups in Arizona are Mexican (25.8%), German (16.5%), English (10.3%), Irish (10.9%), and Native American (4.5%). [12] The southern and central parts of the state are predominantly Mexican American, especially in Santa Cruz County and Yuma County near the Mexican border. The north-central and northwestern counties are largely inhabited by non-Hispanic White Americans. The northeastern part of Arizona has many American Indians. Asian Americans also made major contributions to the development of Arizona, such as the many Chinese who arrived in the state's mines and railroads, and the fact that over 20,000 Japanese Americans, mostly residing in the Grand Avenue section of Phoenix and farming areas of southern Arizona and the Colorado River valley, were interned during World War II. As of the 2010 US Census, Arizonans who claim Filipino ancestry exceed 53,000. [13] Filipino Americans are also the largest Asian American subgroup in the state.

Note: Births in table don't add up, because Hispanics are counted both by their ethnicity and by their race, giving a higher overall number.

According to the Association of Religion Data Archives, the fifteen largest denominations by number of adherents in 2010 and 2000 were: [25] [26]

The United States is the third-most populous country in the world, with an estimated population of 329,227,746 as of January 28, 2020. The United States Census Bureau shows a population increase of 0.75% for the twelve-month period ending in July 2012. Though high by industrialized country standards, this is below the world average annual rate of 1.1%. The total fertility rate in the United States estimated for 2019 is 1.71 children per woman, which is below the replacement fertility rate of approximately 2.1.

The United States Census Bureau counted Minnesota's population at 5,303,925 in the 2010 Census.

California is the most populated U.S. state, with an estimated population of 39.512 million as of July 1, 2019. It has people from a wide variety of ethnic, racial, national, and religious backgrounds.

Texas is the second-most populous U.S. state, with an estimated July 2019 population of 28.996 million. In recent decades, it has experienced strong population growth. Texas has many major cities and metropolitan areas, along with many towns and rural areas. Much of the population is in the major cities of Houston, San Antonio, Dallas, Fort Worth, Austin, and El Paso. 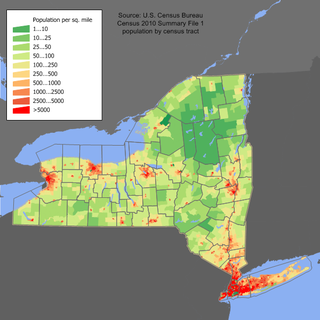 South Dakota is the 46th-most populous U.S. state; in 2012, the U.S. Census Bureau estimated a population of about 833,354. The majority of South Dakotans are White, and the largest religion is Christianity. In 2010, 93.46% of the population spoke English as their primary language.

The demographics of Virginia are the various elements used to describe the population of the Commonwealth of Virginia and are studied by various government and non-government organizations. Virginia is the 12th-most populous state in the United States with over 8 million residents and is the 35th largest in area.

The demographics of the District of Columbia are ethnically diverse in the cosmopolitan federal district. In 2018, the District had a population of 702,455 people, for a resident density of 11,515 people per square mile.

Florida is the third-most populous state in the United States. Its residents include people from a wide variety of ethnic, racial, national and religious backgrounds. The state has attracted immigrants, particularly from Latin America. Florida's majority ethnic group are European Americans, with approximately 65% of the population identifying as White. National ethnic communities in the state include Cubans, who migrated en masse following the revolution in mid-century. They have been joined by other immigrants from Latin America, and Spanish is spoken by more than 20% of the state's population, with high usage especially in the Miami-Dade County area.

Massachusetts has an estimated population of 6.902 million as of 2018 according to the U. S. Census Bureau. This represents a 5.4% increase in population from 2010, when the population was 6.547 million. Currently, Massachusetts is the fifteenth most populous U.S. state.

This article refers to the demographics of the U.S. state of Arkansas. 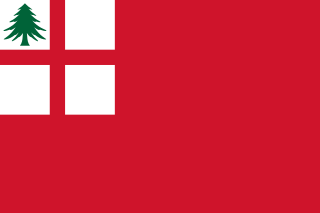 New Englanders are the inhabitants of the New England region in the Northeastern United States. Beginning with the New England Colonies, the name "New Englander" refers to those who live in the six New England states or those with cultural or family ties to the region. Originally inhabited by Algonquin American Indians, including tribes Abenakis, Mi'kmaq, Penobscot, Pequots, Mohegans, Narragansetts, Pocumtucks, and Wampanoag. The region was first settled by European colonists from the Mayflower as part of the Plymouth Company in 1620. The region has seen many different waves of immigration since 1620, creating a unique and diverse culture. New Englanders have played a prominent role in the colonial and modern history of the United States, from political dynasties to influential artists and writers. Famous for their distinct dialect and attitude, New Englanders hold a strong regional identity and a distinct history and culture within the United States.

The demographics of Georgia are inclusive of the ninth most populous state in the United States, with over 9.68 million people, just over 3% of America's population.

Utah is the 30th most populous state in the United States with a population of about 3.3 million, according to the projections of the 2017 US census. The state has also been characterized by a tremendous amount of growth in the last decade, with the highest percent increase in population of any state since 2010. Utah has a surface area of 84,899 square miles, though around 80% of its population is concentrated around a metropolitan area in the north-central part of the state known as the Wasatch Front.

The U.S. state of South Carolina is the 23rd largest state by population, with a population of 5,024,369 as of 2017 United States Census estimates.

The racial and ethnic demographics of the United States have changed dramatically throughout its history.