White County is a county located in the U.S. state of Arkansas. As of the 2010 census, the population was 77,076. [1] The county seat is Searcy. [2] White County is Arkansas's 31st county, formed on October 23, 1835, from portions of Independence, Jackson, and Pulaski counties and named for Hugh Lawson White, a Whig candidate for President of the United States. It is an alcohol prohibition or dry county, though a few private establishments (such as the Searcy Country Club, and Veterans of Foreign Wars posts in Searcy and Beebe) can serve alcohol.

The 45th and current White County Judge is Michael Lincoln of Searcy, who assumed office in January 2007.

On May 17, 1862, White County was the site of the Little Red Skirmish between Union Major General Samuel J Curtis and a force of about 100 loosely-organized rebels, followed by the Action at Whitney Lane in June. [3] also known as The Skirmish at Searcy Landing. [4]

In 1958, Odell Pollard, a retired attorney from Searcy, exposed corrupt election practices at Bald Knob, a small city in White County. Election workers cast "absentee ballots" for some 30 pipeline construction workers and their spouses. However, the workers were outside of Arkansas at the time of the election, which had a prohibition measure on the ballot. The voters never cast absentee votes, according to their affidavits presented by Pollard to the White County prosecutor. No action was taken until after the statute of limitations had expired, when the charges were moot. Pollard said the fraud case made him to switch his partisan affiliation from Democrat to Republican. From 1966 to 1970, Pollard was the state party chairman, and from 1973 to 1976, he was the Arkansas Republican National Committeeman. [5]

In 1988, White County elected virtually an entire slate of Republicans to county offices. Though such Republican sweeps had frequently occurred in northern and northwestern Arkansas, White County was the first in the Little Rock area to turn to Republican as the party steadily made inroads toward a two-party system. [6]

A portion of White County is represented in the Arkansas State Senate by the Republican Ronald R. Caldwell, a real estate businessman from Wynne in Cross County.

Over The past few election cycles White County has trended heavily towards the GOP. The last democrat (as of 2016) to carry this county was Bill Clinton in 1996.

Latina Imports and Latina Nursery are also located in Searcy and is one of the largest female, Hispanic-owned companies in Arkansas.

The first Wal-Mart distribution center away from the corporate headquarters in Bentonville was established in Searcy.

Public education is provided by several public school districts including:

Townships in Arkansas are the divisions of a county. Each township includes unincorporated areas; some may have incorporated cities or towns within part of their boundaries. Arkansas townships have limited purposes in modern times. However, the United States Census does list Arkansas population based on townships (sometimes referred to as "county subdivisions" or "minor civil divisions"). Townships are also of value for historical purposes in terms of genealogical research. Each town or city is within one or more townships in an Arkansas county based on census maps and publications. The townships of White County are listed below; listed in parentheses are the cities, towns, and/or census-designated place s that are fully or partially inside the township. [17] [18]

Searcy County is a county located in the U.S. state of Arkansas. As of the 2010 census, the population was 8,195. The county seat is Marshall. The county was formed December 13, 1838, from a portion of Marion County and named for Richard Searcy, the first clerk and judge in the Arkansas Territory. The city of Searcy, Arkansas, some seventy miles away, shares the name despite having never been part of Searcy County. The county is an alcohol prohibition or dry county. 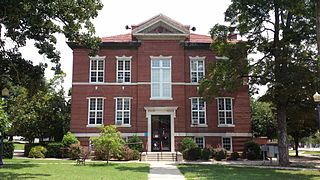 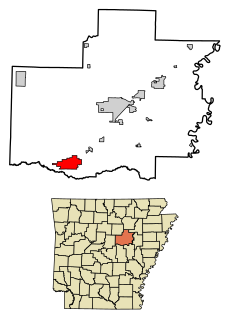 Beebe is a city in White County, Arkansas, United States. The population was 7,315 at the 2010 census, making it the second most populous in the county. The city is home to ASU-Beebe. ASU-Beebe also has branch campuses in Heber Springs, Searcy and Little Rock Air Force Base.

Griffithville is a town in White County, Arkansas, United States. Windle Porter is the current mayor. The population was 262 at the 2000 census.

Judsonia is a city in White County, Arkansas, United States. Stan Robinson is the current mayor. The population was 2,019 at the 2010 census.

Kensett is a city in White County, Arkansas, United States. Located adjacent to the east side of Searcy, the city is the hometown of noted legislator Wilbur D. Mills, who was influential throughout the 1960s and 1970s in the United States House of Representatives.

Searcy is the largest city and county seat of White County, Arkansas, United States. According to 2018 Census Bureau estimates, the population of the city is 23,768. It is the principal city of the Searcy, AR Micropolitan Statistical Area which encompasses all of White County. The city takes its name from Richard Searcy, a judge for the Superior Court of the Arkansas Territory. A college town, Searcy is the home of Harding University and ASU-Searcy. 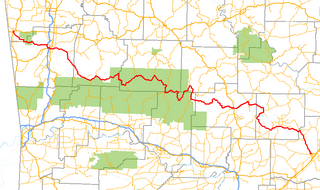 Highway 16 is an east–west state highway in Arkansas. The route begins in Siloam Springs at US Highway 412 (US 412) and Highway 59 and runs east through Fayetteville and the Ozark National Forest to US Highway 67 Business (US 67B) in Searcy. Highway 16 was created during the 1926 Arkansas state highway numbering, and today serves as a narrow, winding, 2-lane road except for overlaps of 10 miles (16 km) through Fayetteville. Much of the highway winds through the Ozarks, including the Ozark National Forest, where a portion of the highway is designated as an Arkansas Scenic Byway. The route has a short spur route in Siloam Springs designated as Highway 16 Spur. 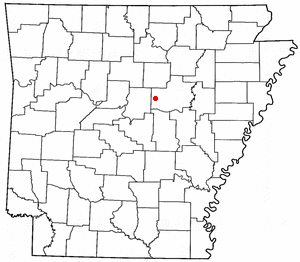 El Paso is an unincorporated community in southwestern White County, Arkansas, United States. Its name is Spanish for "the pass", referring to a small gap in the hills on the community's northern edge. Once known as Peach Orchard Gap in its early settlement, the origin of El Paso's Spanish name is unknown.

Highway 87 is a designation for four north–south state highways in Arkansas. Created during the 1926 Arkansas state highway numbering, the original alignment remains between Bradford and Pleasant Plains, though it has been revised and extended over the years. The three remaining segments are former county roads, connecting rural communities to local points of interest and other state highways. All three were added to the state highway system in 1973 during a period of system expansion. All segments are maintained by the Arkansas Department of Transportation (ArDOT). 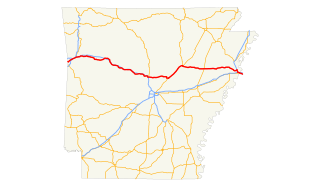 U.S. Route 64 is a U.S. highway running from Teec Nos Pos, Arizona east to Nags Head, North Carolina. In the U.S. state of Arkansas, the route runs 246.35 miles (396.46 km) from the Oklahoma border in Fort Smith east to the Tennessee border in Memphis. The route passes through several cities and towns, including Fort Smith, Clarksville, Russellville, Conway, Searcy, and West Memphis. US 64 runs parallel to Interstate 40 until Conway, when I-40 takes a more southerly route.

Riverview School District is a public school district based in Searcy, Arkansas, United States. The Riverview School District provides early childhood, elementary and secondary education for more than 1,300 pre-kindergarten through grade 12 students throughout southeast White County at its campuses in eastern Searcy, Kensett, and Judsonia. It also serves Griffithville.

White County Central School District is a public school district based in unincorporated White County, Arkansas, United States, near the Providence community, north of Judsonia. The district encompasses 59.32 square miles (153.6 km2) of land including a small northwestern portion of the city limits of Judsonia. Schools in the district provide early childhood, elementary and secondary education to Providence and Steprock, as well as surrounding unincorporated communities in central White County along the Arkansas Highway 157 corridor, and near Pangburn and Bald Knob.

Highway 36 is a state highway in Central Arkansas. The highway begins at U.S. Highway 64 (US 64) at Hamlet and runs east through several small communities to Searcy, where it serves as the Beebe-Capps Expressway, a major crosstown arterial roadway. Following a discontinuity at US 64/US 67/US 167, the highway continues east to Kensett as Wilbur D. Mills Avenue before state maintenance ends at the small community of Georgetown. This highway is maintained by the Arkansas Department of Transportation (ARDOT).