Characteristics of the genre

Basic Instinct , directed by Paul Verhoeven and written by Joe Eszterhas, was released to great success and controversy in 1992. Featuring overt sexuality and violence, including a plot depicting a bisexual woman as a murderous psychopath, the film is seen as the apotheosis of the genre. [25] Though it received mixed reviews, it was a significant box office smash as it grossed $352 million worldwide. [26] Sliver attempted to duplicate this success—with the same screenwriter, Eszterhas, and star, Sharon Stone—the following year. Though Sliver fared even worse with critics, [27] it also opened at No. 1 at the box office. [28] Disclosure , directed by Barry Levinson, was met with considerable success in 1994. The film—which concerns a computer specialist (played by Michael Douglas, his then third film of the genre) who is sexually harassed by his female superior and former lover (played by Demi Moore)—grossed $214 million against its $50 million budget. [29]

This classic period took place amidst the boon of the video rental market [30] and the worldwide cable TV market. [31] Over the course of the 1980s, these two new markets, together called direct-to-video, or DTV, would become a lucrative, non-theatrical alternative for producers of low-budget, R-rated films. [32] The DTV market would often have a symbiotic relationship with the big studio films. [33]

Throughout the 1980s, cable television was similarly expanding and diversifying its appeal to adult audiences. In 1980 Cinemax (owned by HBO) launched with a 24-hour schedule. [36] Soon after, Showtime followed suit with The Movie Channel. [36] Fearing the negative publicity associated with traditional sexploitation [37] these late-night, premium cable channels actively sought and developed adult programming that could be, in the words of one HBO programmer, "spicy but not obscene". [38]

Of the cultural factors that helped lead to the genre's demise, writer Rich Juzwiak detailed,

Further developments of the genre

A femme fatale, sometimes called a maneater or vamp, is a stock character of a mysterious, beautiful, and seductive woman whose charms ensnare her lovers, often leading them into compromising, deadly traps. She is an archetype of literature and art. Her ability to enchant, entice and hypnotize her victim with a spell was in the earliest stories seen as verging on supernatural; hence, the femme fatale today is still often described as having a power akin to an enchantress, seductress, witch, having power over men. Femmes fatales are typically villainous, or at least morally ambiguous, and always associated with a sense of mystification, and unease. 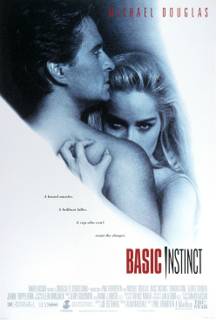 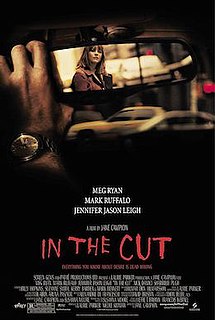 In the Cut is a 2003 psychological thriller film written and directed by Jane Campion and starring Meg Ryan, Mark Ruffalo, Jennifer Jason Leigh and Kevin Bacon. Campion's screenplay is an adaptation of the 1995 novel of the same name by Susanna Moore. The film focuses on an English teacher who becomes personally entangled with a detective investigating a series of gruesome murders in her Manhattan neighborhood.

Erin Brown is an American film actress, filmmaker, model, and musician. Brown has starred in over fifty low-budget films as Misty Mundae.

Black Widow, is a "Film Noir Musical" film written by David Mortin and Patricia Fogliato and directed by the former. It is loosely based on the trial of Evelyn Dick for the murder of her husband. The film stars Martin Tielli, Mary Margaret O'Hara and Sarah Slean as Eve Hardwick, the character that is based on Evelyn Dick.

Agnieszka Piotrowska is an author, academic and award-winning filmmaker, probably best known for her 2008 documentary Married to the Eiffel Tower, about women who fall in love with objects."

Sex in film, the presentation of aspects of sexuality in film, specially human sexuality, has been controversial since the development of the medium. Films which display or suggest sexual behavior have been criticized by religious groups or have been banned or censored by governments, although attitudes have changed much along the years and a more permissive social environment has developed in certain parts of the world, notably in the so called Western countries, that is the countries of Europe, North America, Australia and New Zealand. In countries with a film rating system, films which contain explicit sex scenes typically receive a restricted classification. Nudity in film may be regarded as sexual or as non-sexual.

The depictions of women in film noir come in a range of archetypes and stock characters, including the alluring femme fatale. A femme fatale, is a prevalent and indicating theme to the style of film noir.

La Femme Anjola is a 2021 film written by Tunde Babalola and directed by Mildred Okwo. It is a film noir psychological thriller which stars Rita Dominic and Nonso Bassey. It was released in cinemas on March 19, 2021.