Martial arts films are a subgenre of action films that feature numerous martial arts combat between characters. These combats are usually the films' primary appeal and entertainment value, and often are a method of storytelling and character expression and development. Martial arts are frequently featured in training scenes and other sequences in addition to fights. Martial arts films commonly include hand-to-hand combat along with other types of action, such as stuntwork, chases, and gunfights. [1] [2] [3] Sub-genres of martial arts films include kung fu films, wuxia, karate films, and martial arts action-comedy films, while related genres include gun fu, jidaigeki and samurai films.

Asian films are known to have a more minimalist approach to film based on their culture. Some martial arts films have only a minimal plot and amount of character development and focus almost exclusively on the action, while others have more creative and complex plots and characters along with action scenes. [4] Films of the latter type are generally considered to be artistically superior films, but many films of the former type are commercially successful and well received by fans of the genre. [5] [6] One of the earliest Hollywood movies to employ the use of martial arts was the 1955 film Bad Day at Black Rock , though the scenes of Spencer Tracy performed barely any realistic fight sequences, but composed mostly of soft knifehand strikes. [7] [8] [9] [10]

Akira Kurosawa pioneered the martial arts film genre with his 1943 directorial debut, Sugata Sanshiro. The film is about a young man learning Judo and fighting against various Jujitsu practitioners. Kurosawa also directed a sequel in 1945 titled Sugata Sanshiro, Part Two. It features fights with boxers and karate practitioners, maybe the first depiction of karate in cinema.

Martial arts films contain many characters who are martial artists and these roles are often played by actors who are real martial artists. If not, actors frequently train in preparation for their roles or the action director may rely more on stylized action or film making tricks like camera angles, editing, doubles, undercranking, wire work and computer-generated imagery. Trampolines and springboards used to be used to increase the height of jumps. The minimalist style employs smaller sets and little space for improvised but explosive fight scenes, as seen by Jackie Chan's films. [11] These techniques are sometimes used by real martial artists as well, depending on the style of action in the film. [1]

During the 1970s and 1980s, the most visible presence of martial arts films was the hundreds of English-dubbed kung fu and ninja films produced by the Shaw Brothers, Godfrey Ho and other Hong Kong producers. These films were widely broadcast on North American television on weekend timeslots that were often colloquially known as Kung Fu Theater, Black Belt Theater or variations thereof. Inclusive in this list of films are commercial classics like The Big Boss , Drunken Master and One Armed Boxer .

Martial arts films have been produced all over the world, but the genre has been dominated by Hong Kong action cinema, peaking from 1971 with the rise of Bruce Lee until the mid-1990s with a general decline in the industry, till it was revived close to the 2000s. [12] Other notable figures in the genre include Jackie Chan, Jet Li, Sammo Hung, Yuen Biao and Donnie Yen.

Sonny Chiba, Etsuko Shihomi, and Hiroyuki Sanada starred in numerous karate and jidaigeki films from Japan during the 1970s and early 1980s. Hollywood has also participated in the genre with actors such as Chuck Norris, Sho Kosugi, Jean-Claude Van Damme, Steven Seagal, Brandon Lee (son of Bruce Lee), Wesley Snipes, Gary Daniels, Mark Dacascos and Jason Statham. [13] In the 2000s, Thailand's film industry became an international force in the genre with the films of Tony Jaa [14] and the cinema of Vietnam followed suit with The Rebel and Clash . In more recent years, the Indonesian film industry has offered Merantau (2009) [15] [16] [17] and The Raid: Redemption (2011).

Women have also played key roles in the genre, including such actresses as Michelle Yeoh, Angela Mao and Cynthia Rothrock. [18] [19] [20] In addition, western animation has ventured into the genre with the most successful effort being the internationally hailed DreamWorks Animation film franchise, Kung Fu Panda , starring Jack Black and Angelina Jolie.

The Matrix is considered revolutionary in American cinema for raising the standard of fight scenes in western cinema. [21]

Kung fu films are a significant movie genre in themselves. Like westerns for Americans, they have become an identity of Chinese cinema. As the most prestigious movie type in Chinese film history, kung fu movies were among the first Chinese films produced and the wuxia period films (武俠片) are the original form of Chinese kung fu films. The wuxia period films came into vogue due to the thousands of years popularity of wuxia novels (武俠小說). For example, the wuxia novels of Jin Yong [23] and Gu Long [24] directly led to the prevalence of wuxia period films. Outside of the Chinese speaking world the most famous wuxia film made was the Ang Lee film Crouching Tiger, Hidden Dragon , which was based on the Wang Dulu series of wuxia novels: it earned four Academy Awards, including one for Best Foreign Film.

In general, kung fu/kungfu refers to the Chinese martial arts also called wushu and quanfa. In China, it refers to any study, learning, or practice that requires patience, energy, and time to complete. In its original meaning, kung fu can refer to any discipline or skill achieved through hard work and practice, not necessarily martial arts. The Chinese literal equivalent of "Chinese martial art" would be 中國武術 zhōngguó wǔshù.

Wuxia, which literally means "martial heroes", is a genre of Chinese fiction concerning the adventures of martial artists in ancient China. Although wuxia is traditionally a form of historical fiction, its popularity has caused it to be adapted for such diverse art forms as Chinese opera, manhua, television dramas, films, and video games. It forms part of popular culture in many Chinese-speaking communities around the world. 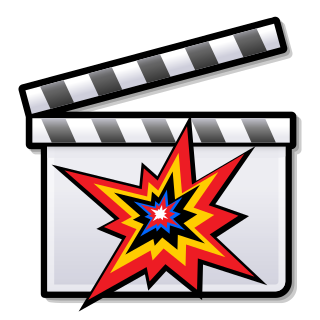 Action film is a film genre in which the protagonist is thrust into a series of events that typically involve violence and physical feats. The genre tends to feature a mostly resourceful hero struggling against incredible odds, which include life-threatening situations, a dangerous villain, or a pursuit which usually concludes in victory for the hero. 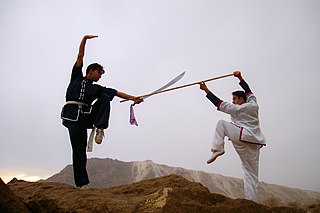 Chinese martial arts, often called by the umbrella terms kung fu, kuoshu or wushu, are multiple fighting styles that have developed over the centuries in Greater China. These fighting styles are often classified according to common traits, identified as "families" of martial arts. Examples of such traits include Shaolinquan (少林拳) physical exercises involving All Other Animals (五形) mimicry or training methods inspired by Old Chinese philosophies, religions and legends. Styles that focus on qi manipulation are called internal, while others that concentrate on improving muscle and cardiovascular fitness are called external. Geographical association, as in northern and southern, is another popular classification method.

Hu Jinquan, better known as King Hu, was a Chinese film director and actor based in Hong Kong and Taiwan. He is best known for directing various wuxia films in the 1960s and 1970s, which brought Hong Kong and Taiwanese cinema to new technical and artistic heights. His films Come Drink with Me (1966), Dragon Inn (1967), and A Touch of Zen (1970–1971) inaugurated a new generation of wuxia films in the late 1960s. Apart from being a film director, Hu was also a screenwriter and set designer.

Gun fu, a portmanteau of gun and kung fu, is a style of sophisticated close-quarters gunfight resembling a martial arts battle that combines firearms with hand-to-hand combat and traditional melee weapons in an approximately 50/50 ratio. It can be seen in Hong Kong action cinema, and in American action films influenced by it.

Wire fu is an element or style of Hong Kong action cinema used in fight scenes. It is a combination of two terms: "wire work" and "kung fu".

Chang Cheh was a Chinese filmmaker, screenwriter, lyricist and producer active in the 1960s, 1970s and 1980s. Chang Cheh directed more than 90 films in Greater China, the majority of them with the Shaw Brothers Studio in Hong Kong. Most of his films are action films, especially wuxia and kung fu films filled with violence. 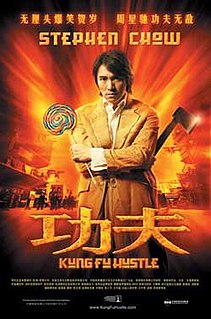 Yu So-chow is a former Chinese actress from Hong Kong. Yu has a star at Avenue of Stars in Hong Kong.

Heroes of Jin Yong, first published in 1996, is a tactical role-playing game based on the storyline and characters in Jin Yong's Wuxia novels, developed by Heluo Studio.

The lei tai fighting stage has been the subject of various types of media; including Chinese film, video games, television, Literature, and music. 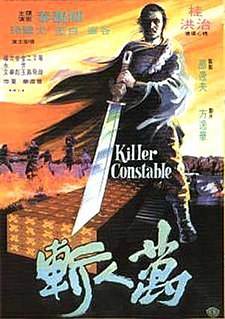 The Chinese Boxer is a 1970 Hong Kong action kung fu film written, directed by and starring Jimmy Wang Yu. Tong Gaai was the action director. The Chinese Boxer was a box office success at the time of its release and is currently considered the first classic in the non-wuxia, Kung Fu genre, or specifically the unarmed combat martial art films that center more on training and prowess than fantasy/adventure. It would prove influential to subsequent films like Fist of Fury. 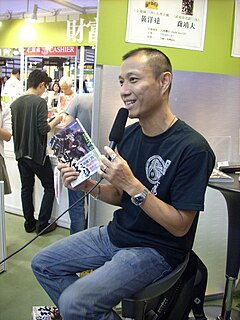 Jozev Kiu Ching-Fu is a Hong Kongese wuxia novelist, lyricist and Eskrima coach. His magnum opus, Blood and Steel, had received widespread acclaim and Kiu is regarded as one of the leading figures of the post-Jin Yong Hong Kong Wuxia fiction genre.