Unakoti is a hill from which the name of Unakoti District is derived. The Kokborok name of Unakoti is Subrai Khung as claimed by Jamatia Hoda; Unakoti hill literally means one less a koti in Bengali, hosts an ancient Shaivite place of worship with huge rock reliefs celebrating Shiva. It is the prime tourist spot of Unakoti District, Tripura in the Kailashahar Subdivision in the North-eastern Indian state of Tripura. [1] It is Shiva pilgrimage and dates back to unknown era

The images found at Unakoti are of two types: namely rock-carved figures and stone images. Among the rock-cut carvings, the central Shiva head and gigantic Ganesha figures deserve special mention. The central Shiva head known as Unakotiswara Kal Bhairava is about 30 feet high including an embroidered head-dress which itself is 10 feet high. On each side of the head-dress of the central Shiva, there are two full-size female figures - one of Durga standing on a lion and another female figure on the other side. In addition, three enormous images of Nandi Bull are found half-buried in the ground. There are various other stone as well as rock-cut images at Unakoti.

According to Hindu mythology, Lord Shiva once spent a night here en route to Kashi.  99,99,999 gods and goddesses followed him. He had asked his followers to wake up before sunrise and make their way towards Kashi. Unfortunately, none awoke, except Lord Shiva himself. Before he set out for Kashi alone, he put a curse on the others, turning them to stone.  And that is how the site got its name.  However, there are not that many sculptures found now. The place is peaceful & surrounded by lush greenery.

Every year a big fair popularly known as Ashokastami Mela is held in the month of April. The festival is visited by thousands of pilgrims. Another smaller festival takes place in January.

The site has suffered centuries of neglect causing degradation and loss of considerable scale to the rock art. Since its adoption by the ASI (Archaeological Survey of India) as a heritage site, the situation has slightly improved, though a lot of work including substantial excavation remains to be undertaken. The government of India has approached to UNESCO to declare it as a World Heritage Site. [2] The Centre has recently granted Rs 12 crore to the state for developing the area, 178  km from here, as a major tourist destination. [3]

Parvati, Uma or Gauri is the Hindu goddess of fertility, love, beauty, harmony, marriage, children, and devotion; as well as of divine strength and power. Known by many other names, she is the gentle and nurturing form of the Supreme Hindu goddess Mahadevi and one of the central deities of the Goddess-oriented Shakti sect called Shaktism. She is the Mother goddess in Hinduism, and has many attributes and aspects. Along with Lakshmi and Saraswati, she forms the Tridevi of Hindu goddesses.

Shamlaji, also spelled Shamalaji, is a major Hindu pilgrimage centre in Aravalli district of Gujarat state of India. The Shamlaji temple is dedicated to Vishnu. Several other Hindu temples are located nearby.

The Kashi Vishwanath Temple is one of the most famous Hindu temples dedicated to Lord Shiva. It is located in Vishwanath Gali of Varanasi, Uttar Pradesh in India. The Temple stands on the western bank of the holy river Ganga, and is one of the twelve Jyotirlingas, or Jyotirlingams, the holiest of Shiva Temples. The main deity is known by the names Shri Vishwanath and Vishweshwara literally meaning Lord of the Universe. Varanasi city was called Kashi in ancient times, and hence the temple is popularly called Kashi Vishwanath Temple. The etymology of the name Vishveshvara is Vishva: Universe, Ishvara: lord, one who has dominion. 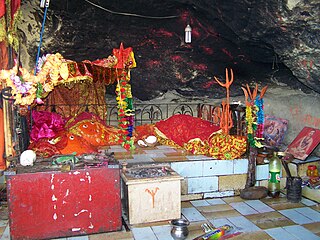 The Shakti Pitha are significant shrines and pilgrimage destinations in Shaktism, the goddess-focused Hindu tradition. There are 51 Shakti peethas by various accounts, of which 18 are named as Maha (major) in medieval Hindu texts.

Kolluru or Kollur is a small temple-town in Byndoor Taluk in Udupi district of Karnataka state, India. It is situated about 27 km from Byndoor town. This village lies at the foot of the Western Ghats and is famous for the Mookambika temple, a Hindu pilgrim center. The village is located on the banks of Agnitheertha and Souparnika river. 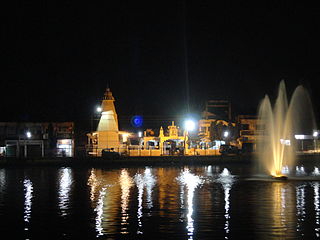 Dharmanagar or (Dhôrmônôgôr) (ধর্মনগর) is a town with a municipal council in the North East of India and the North Tripura district of the state of Tripura, India. Dharmanagar is the second largest urban body in the state of Tripura, after Agartala, the state capital. Dharmanagar is a major commercial center in Tripura because of its strategic location, connectivity and presence of many business & financial institutions. The city has many schools, both Bengali and English medium. The city also has been ruled by several emperors. 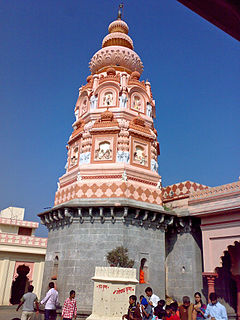 Shri Mayureshwar Mandir or Shri Moreshwar Temple is a Hindu temple (mandir) dedicated to Ganesha, god of wisdom. It is located in Moragaon in Pune District, about 65 km away from Pune city in the Indian state of Maharashtra. The temple is the starting and ending point of a pilgrimage of eight revered Ganesha temples called Ashtavinayaka. 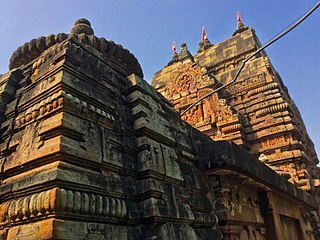 Baitāḷa deuḷa or Vaitāḷa deuḷa is an 8th-century Hindu temple of the typical Khakara style of the Kalinga architecture dedicated to Goddess Chamunda located in Bhubaneswar, the capital city of Odisha, India. It is also locally known as Tini-mundia deula due to the three spires on top of it, a very distinct and unusual feature. The three spires are believed to represent the three powers of the goddess Chamunda - Mahasaraswati, Mahalakshmi and Mahakali.

Kailashahar is a municipal council city, the headquarters of the Unakoti district in the Indian state of Tripura.

In religion and spirituality, a pilgrimage is a very long journey or search of great moral significance. Sometimes, it is a journey to a sacred area or shrine of importance to innate faith. Members of every major religion participate in pilgrimages. A person who makes such a journey is called a pilgrim.

The Lumding–Sabroom section is a railway line under Lumding railway division of Northeast Frontier Railway zone of Indian Railways. It is a single 1,676 mm broad-gauge track from Lumding in Nagaon District of Assam state to Agartala in West Tripura district of Tripura state. The 43 km-long 1,676 mm segment from Agartala southwards to Udaipur, Tripura was completed in 2016 and became operational on 23 January 2017. The remaining 70 km long track to Sabroom at the bank of Feni River at Bangladesh border was completed in 2019 and became operational on 3 October 2019.

Devtamura is a hill range in South Tripura district of Tripura, India. It is known for an archaeological site of rock sculptures, a panel of carved images of Hindu deities of Durga, Ganesha and Kartikeya on the bank of Gomati River. The stone images are estimated to have curved during the 15/16th century.

Unakoti district is a district of Tripura, India. This district was created on 21 January 2012 when four new districts were created in Tripura, taking the number of districts in the state from four to eight. 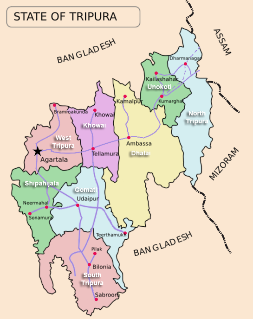 Gomati district is a district of Tripura, India. This district was created in January 2012 when four new districts were created in Tripura, taking the number of districts in the state from four to eight. Udaipur is its headquarters.

The Kal Bhairav temple is a Hindu temple located in the Ujjain city of Madhya Pradesh, India. It is dedicated to Kal Bhairav, the guardian deity of the city. Located on the banks of the Shipra River, it is one of the most active temples in the city, visited by hundreds of devotees daily. Liquor is one of the offerings made to the temple deity.

Kumarghat railway station is a small railway station in Unakoti district, Tripura. Its code is KUGT. It serves Kumarghat town. The station consists of two platforms. The platform is not well sheltered. It lacks many facilities including water and sanitation.

Chabimura or Chobimura (Bengali:ছবিমুড়া) also known as Chakwrakma or Chakrakma is famous for its panels of rock carving on steep mountain wall on the bank of Gomati river in Indian state Tripura. There are huge carved images of Shiva, Vishnu, Kartika, Mahisasura Mardini Durga and other Gods and Goddesses.

UNAKOTI: A HISTORICAL PLACE IN TRIPURA! THE MYSTERIOUS UNAKOTI: AN OPEN AIR ART GALLERY IN TRIPURA!