It was formed in 1889 as the council for the administrative county of Northumberland. The city of Newcastle upon Tyne was a county borough independent from the county council, although the county council had its meeting place at Moot Hall in the city. Tynemouth subsequently also became a county borough in 1904, removing it from the administrative county. The county was further reformed in 1974, becoming a non-metropolitan county and ceding further territory around the Newcastle conurbation to the new metropolitan county of Tyne and Wear. As part of the 2009 structural changes to local government in England it became a unitary authority with the same boundaries, this disregarded the referendum held in 2005 in which the population voted against the forming of a unitary authority. [4]

Naming of the new unitary authority

On 17 December 2008 it was decided that the new name would be Northumberland County Council. The chairman of the council stated that:

Having considered the findings of this consultation, it has been decided to call the new authority Northumberland County Council. It is important to reiterate that whilst the single unitary will adopt the name of an existing council, this is emphatically not a County Council takeover. As of 1 April 2009, all existing Northumberland councils will be abolished to make way for a brand new organisation, with new vision, values, and behaviours.

Legally, however, the council remains the same body as before, simply assuming the functions of the districts. [6]

Northumberland appoints a civic head each year, and separately appoints a business chair to preside over council meetings. This differs from most councils where these two ceremonial roles are performed by the same person. The civic head for 2022–2023 is Trevor Cessford, whilst the business chair since 2021 has been Barry Flux, both Conservatives. Political leadership is provided by the leader of the council, being Glen Sanderson since 2020.

Leader of the council and cabinet

Leader of the official opposition and shadow cabinet

For Eurostat purposes the area under the jurisdiction of Northumberland County Council is a NUTS 3 region (code UKC21) and is one of six boroughs or unitary districts that comprise the "Northumberland and Tyne and Wear" NUTS 2 region. 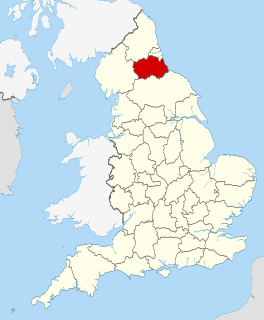 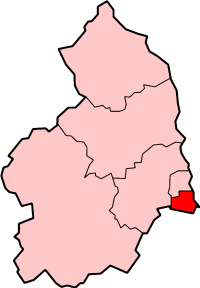 Blyth Valley was a local government district and borough in south-east Northumberland, England, bordering the North Sea and Tyne and Wear. The two principal towns were Blyth and Cramlington. Other population centres include Seaton Delaval, and Seaton Sluice. 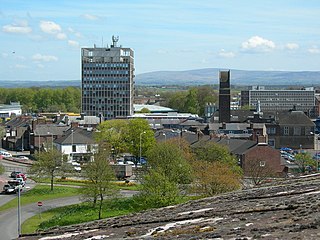 Chester was a non-metropolitan local government district of Cheshire, England from 1974 to 2009. It had the status of a city and a borough. 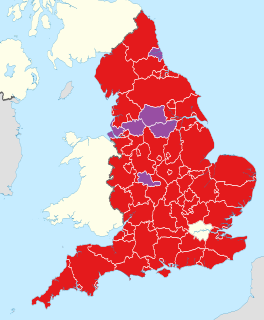 Sunderland City Council elections are generally held three years out of every four, with a third of the council being elected each time. Sunderland City Council is the local authority for the metropolitan borough of the City of Sunderland in Tyne and Wear, England. Since the last boundary changes in 2004, 75 councillors have been elected from 25 wards. 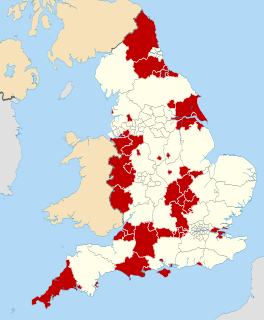 Rutland County Council is the local authority for the unitary authority of Rutland in the East Midlands of England. The current council was created in April 1997. The population of the council's area at the 2011 census was 37,369.

The 2008 United Kingdom local elections were held on 1 May 2008. These elections took place in 137 English Local Authorities and all Welsh Councils. 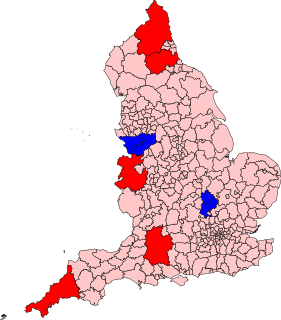 Durham County Council is a local authority administering all significant local government functions in the unitary authority area of County Durham in North East England. The council area covers part of the ceremonial county of County Durham, excluding those parts which now form part of the Borough of Darlington, Borough of Hartlepool and the part of Borough of Stockton-on-Tees north of the River Tees. 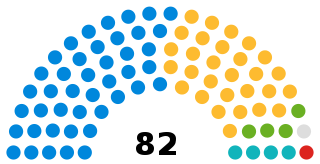 Dorset Council is a unitary local authority in England covering most of the ceremonial county of Dorset. It was created on 1 April 2019 to administer most of the area formerly administered by Dorset County Council, which was previously subdivided into the districts of Weymouth and Portland, West Dorset, North Dorset, Purbeck, and East Dorset, as well as Christchurch, which is now part of Bournemouth, Christchurch and Poole.