Last updated September 15, 2022
A water wave traveling upstream a river or narrow bay because of an incoming tide

A tidal bore, [1] often simply given as bore in context, is a tidal phenomenon in which the leading edge of the incoming tide forms a wave (or waves) of water that travels up a river or narrow bay, reversing the direction of the river or bay's current. It is a strong tide that pushes up the river, against the current.

Bores occur in relatively few locations worldwide, usually in areas with a large tidal range (typically more than 6 meters (20 ft) between high and low tide) and where incoming tides are funneled into a shallow, narrowing river or lake via a broad bay. [2] The funnel-like shape not only increases the tidal range, but it can also decrease the duration of the flood tide, down to a point where the flood appears as a sudden increase in the water level. A tidal bore takes place during the flood tide and never during the ebb tide.

A tidal bore may take on various forms, ranging from a single breaking wavefront with a roller – somewhat like a hydraulic jump [4] [5] – to undular bores, comprising a smooth wavefront followed by a train of secondary waves known as whelps. [6] Large bores can be particularly unsafe for shipping but also present opportunities for river surfing. [6]

Two key features of a tidal bore are the intense turbulence and turbulent mixing generated during the bore propagation, as well as its rumbling noise. The visual observations of tidal bores highlight the turbulent nature of the surging waters. The tidal bore induces a strong turbulent mixing in the estuarine zone, and the effects may be felt along considerable distances. The velocity observations indicate a rapid deceleration of the flow associated with the passage of the bore as well as large velocity fluctuations. [7] [8] A tidal bore creates a powerful roar that combines the sounds caused by the turbulence in the bore front and whelps, entrained air bubbles in the bore roller, sediment erosion beneath the bore front and of the banks, scouring of shoals and bars, and impacts on obstacles. The bore rumble is heard far away because its low frequencies can travel over long distances. The low-frequency sound is a characteristic feature of the advancing roller in which the air bubbles entrapped in the large-scale eddies are acoustically active and play the dominant role in the rumble-sound generation. [9]

Tidal bores can be dangerous. Certain rivers such as the Seine in France, the Petitcodiac River in Canada, and the Colorado River in Mexico to name a few, have had a sinister reputation in association with tidal bores. In China, despite warning signs erected along the banks of the Qiantang River, a number of fatalities occur each year by people who take too much risk with the bore. [2] The tidal bores affect the shipping and navigation in the estuarine zone, for example, in Papua New Guinea (in the Fly and Bamu Rivers), Malaysia (the Benak in the Batang Lupar), and India (the Hooghly River bore).

On the other hand, tidal bore-affected estuaries are rich feeding zones and breeding grounds of several forms of wildlife. [2] The estuarine zones are the spawning and breeding grounds of several native fish species, while the aeration induced by the tidal bore contributes to the abundant growth of many species of fish and shrimp (for example in the Rokan River, Indonesia). The tidal bores also provide opportunity for recreational inland surfing, such as the Seven Ghosts bore on the Kampar River, Indonesia.

Rivers and bays with tidal bores

Rivers and bays that have been known to exhibit bores include those listed below. [2] [19]

The phenomenon is generally named un mascaret in French. [22] but some other local names are preferred. [19]

With the Bay of Fundy having the highest tidal range in the world, most rivers draining into the upper bay between Nova Scotia and New Brunswick have significant tidal bores. They include:

Historically, there was a tidal bore on the Gulf of California in Mexico at the mouth of the Colorado River. It formed in the estuary about Montague Island and propagated upstream. It was once very strong, but diversions of the river for irrigation have weakened the flow of the river to the point the tidal bore has nearly disappeared. 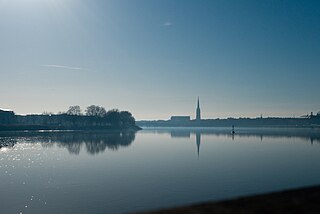 An estuary is a partially enclosed coastal body of brackish water with one or more rivers or streams flowing into it, and with a free connection to the open sea. Estuaries form a transition zone between river environments and maritime environments and are an example of an ecotone. Estuaries are subject both to marine influences such as tides, waves, and the influx of saline water, and to fluvial influences such as flows of freshwater and sediment. The mixing of seawater and freshwater provides high levels of nutrients both in the water column and in sediment, making estuaries among the most productive natural habitats in the world. 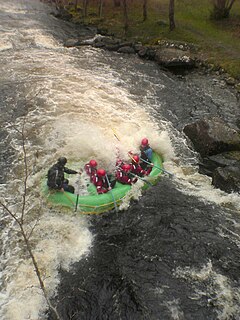 A hydraulic jump is a phenomenon in the science of hydraulics which is frequently observed in open channel flow such as rivers and spillways. When liquid at high velocity discharges into a zone of lower velocity, a rather abrupt rise occurs in the liquid surface. The rapidly flowing liquid is abruptly slowed and increases in height, converting some of the flow's initial kinetic energy into an increase in potential energy, with some energy irreversibly lost through turbulence to heat. In an open channel flow, this manifests as the fast flow rapidly slowing and piling up on top of itself similar to how a shockwave forms. 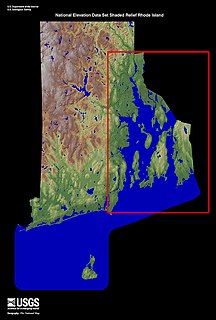 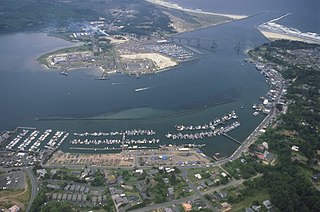 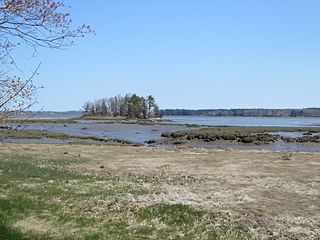 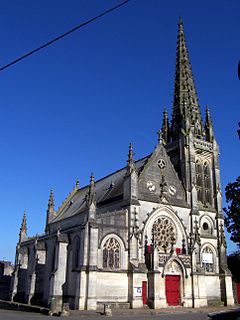 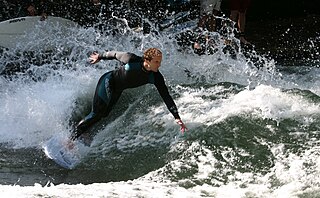 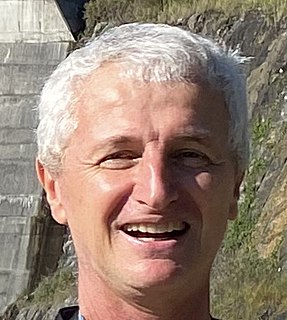 Hubert Chanson is a professional engineer and academic in hydraulic engineering and environmental fluid mechanics. Since 1990 he has worked at the University of Queensland.

The Trent Aegir, also known as the Eagre, is a tidal bore on the River Trent in England. At certain times of the year, the lower tidal reaches of the Trent experience a moderately large bore. It is said to take its name from Ægir, a personification of the sea in Norse mythology, although this is disputed. A more likely derivation is from Old English ēagor.

A mouth bar is an element of a deltaic system, which refers to typically mid-channel deposition of the sediment transported by the river channel at the river mouth.

Estuary freshwater inflow is the freshwater that flows into an estuary. Other types of environmental flows include instream flow, the freshwater water flowing in rivers or streams, and estuary outflow, the outflow from an estuary to the ocean.

The Bec d'Ambès is the point of confluence of the rivers Garonne and Dordogne, in the Gironde estuary. Situated 15 miles north of Bordeaux, it has an oil refinery which was destroyed by bombing during World War II, but rebuilt after the war. It is in the Ambès commune. 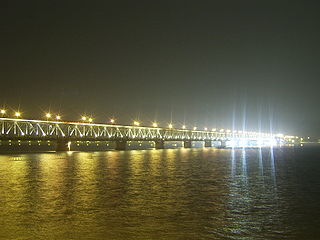 The Qiantang River or alternatively Tsientang River is a river in East China. An important commercial artery, it runs for 459 kilometers (285 mi) through Zhejiang, passing through the provincial capital Hangzhou before flowing into the East China Sea via Hangzhou Bay south of Shanghai. Its original name, the "Zhe River" or "Zhe Jiang", is the origin of the name of Zhejiang province. The river is also known, along with Hangzhou Bay, for having the world's largest tidal bore, a phenomenon where leading edge of the incoming tide forms a wave of water that travels up a river or narrow bay against the direction of the river or bay's current. 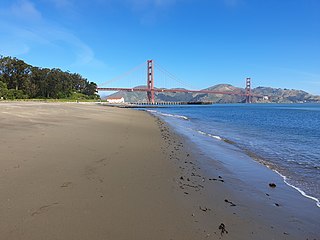 Beaches in estuaries and bays (BEBs) refer to beaches that exist inside estuaries or bays and therefore are partially or fully sheltered from ocean wind waves, which are a typical source of energy to build beaches. Beaches located inside harbours and lagoons are also considered BEBs. BEBs can be unvegetated or partially unvegetated and can be made of sand, gravel or shells. As a consequence of the sheltering, the importance of other sources of wave energy, including locally generated wind waves and infragravity waves, may be more important for BEBs than for those beaches on the open coast. Boat wakes, currents driven by tides, and river inflow can also be important for BEBs. When BEBs receive insufficient wave energy, they can become inactive, and stabilised by vegetation; this may occur through both natural processes and human action. BEBs exist in all latitudes from beaches located in fjords and drowned river valleys (rias) in high latitudes to beaches located in the equatorial zone like, for example, the Amazon estuarine beaches.

Look up tidal bore  or eagre in Wiktionary, the free dictionary.
This page is based on this Wikipedia article
Text is available under the CC BY-SA 4.0 license; additional terms may apply.
Images, videos and audio are available under their respective licenses.