Ka, also (alternatively) Sekhen, [1] [2] was a Predynastic pharaoh of Upper Egypt belonging to Dynasty 0. He probably reigned during the first half of the 32nd century BC. The length of his reign is unknown.

The correct reading of Ka's name remains uncertain. [3] There are vessel inscriptions which show a serekh with a typical Ka-symbol, both written upright correctly, but there are also inscriptions presenting an upright serekh with an upside-down Ka-symbol inside. The second form of that writing indicates a reading as Sekhen (meaning ‘to embrace s.o.’) rather than Ka. [4] It was also thought to be the birth name of Narmer. [5] Because the reading of the name is so uncertain, Egyptologists and writing experts such as Ludwig David Morenz prefer a neutral reading as ‘King Arms’. [6]

Ka ruled over Thinis in the first half of the 32nd century BC and was buried at Umm el-Qa'ab. He most likely was the immediate successor to Iry-Hor and was succeeded either by Narmer or by Scorpion II. [7] He is the earliest known Egyptian king with a serekh inscribed on a number of artifacts. This may thus be an innovation of his reign. [8] Ka is one of the best attested predynastic kings with Narmer and Scorpion II. Beyond Abydos, he is attested in the predynastic necropolis of Adaima in Upper Egypt [9] and in the north in Tarkhan, Helwan, Tell Ibrahim Awad, Wadi Tumilat and as far north as Tel Lod in the Southern Levant. [10]

The number of artifacts bearing Ka's serekh found outside Abydos is much greater than that of his predecessor. [10] This may be the sign of an increasing influence and perhaps conquest of larger portions of Egypt by the Thinite kings. [10]

Ka's tomb was first excavated by Petrie in 1902. The excavations yielded fragments of flint knife and pottery. In the southernmost chamber B7, more than forty inscriptions have been found on tall jars and cylinder vessels as well as a seal impression. [10] [11] The tomb of Ka (B7, B9) is close to that of Iry-Hor (B1, B2) and Narmer (B17, B18). Furthermore, it is located within a sequential order linking the older "U" cemetery with the First Dynasty tombs, thus suggesting that Ka succeeded Iry-Hor and preceded Narmer on the throne. [12] 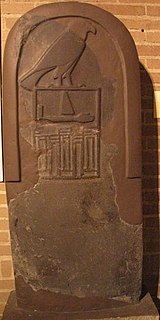 Qa'a was the last king of the First Dynasty of Egypt. He reigned for 33 years at the end of the 30th century BC. 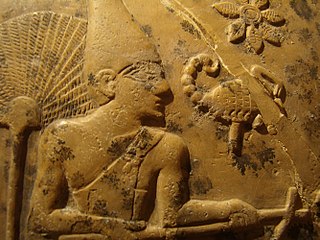 Scorpion II, also known as King Scorpion, was a ruler during the Protodynastic Period of Upper Egypt.

Umm El Qaʻāb is a necropolis of the Early Dynastic Period kings at Abydos, Egypt. Its modern name means "Mother of Pots" as the whole area is littered with the broken pot shards of offerings made in earlier times. The cultic ancient name of the area was (w-)pkr or (rꜣ-)pkr "District of the pkr[-tree]" or "Opening of the pkr[-tree]", belonging to tꜣ-dsr "the secluded/cleared land" (necropolis) or crk-hh "Binding of Eternity". 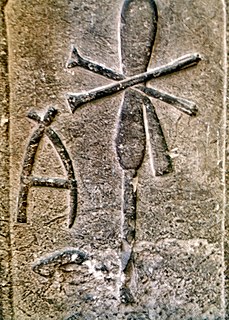 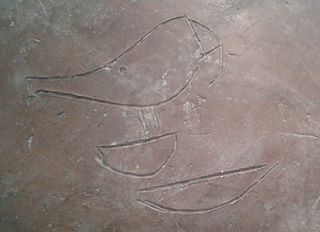 Iry-Hor or Ro was a predynastic pharaoh of Upper Egypt during the 32nd century BC. Iry-Hor's existence was debated, with the Egyptologist Toby Wilkinson contesting the reading and signification of his name. However, continuing excavations at Abydos in the 1980s and 1990s and the discovery in 2012 of an inscription of Iry-Hor in the Sinai confirmed his existence. Iry-Hor is the earliest ruler of Egypt known by name and is sometimes cited as the earliest-living historical person known by name. 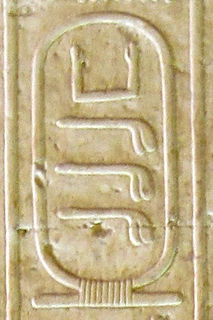 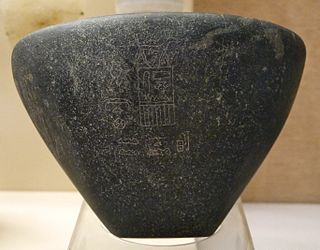 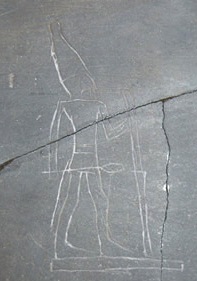 Anedjib, more correctly Adjib and also known as Hor-Anedjib, Hor-Adjib and Enezib, is the Horus name of an early Egyptian king who ruled during the 1st Dynasty. The Egyptian historian Manetho named him "Miebîdós" and credited him with a reign of 26 years, whilst the Royal Canon of Turin credited him with an implausible reign of 74 years. Egyptologists and historians now consider both records to be exaggerations and generally credit Adjib with a reign of 8–10 years. 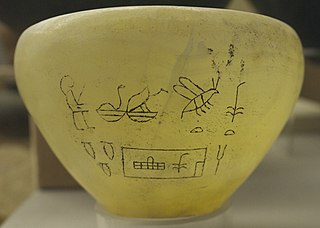 Naqada III is the last phase of the Naqada culture of ancient Egyptian prehistory, dating from approximately 3200 to 3000 BC. It is the period during which the process of state formation, which began in Naqada II, became highly visible, with named kings heading powerful polities. Naqada III is often referred to as Dynasty 0 or the Protodynastic Period to reflect the presence of kings at the head of influential states, although, in fact, the kings involved would not have been a part of a dynasty. In this period, those kings' names were inscribed in the form of serekhs on a variety of surfaces including pottery and tombs.

The Horus name is the oldest known and used crest of ancient Egyptian rulers. It belongs to the "great five names" of an Egyptian pharaoh. However, modern Egyptologists and linguists are starting to prefer the more neutral term: the "serekh name". This is because not every pharaoh placed the falcon, which symbolizes the deity Horus, atop his serekh. 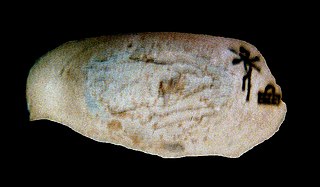 The Nebty name was one of the "great five names" used by Egyptian pharaohs. It was also one of the oldest royal titles. The modern term "Two-Ladies-name" is a simple derivation from the translation of the Egyptian word nebty. 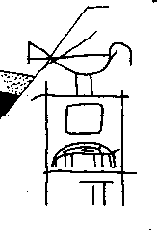 Hedju Hor was a ruler in northern Egypt from the Predynastic Period. His existence is controversial.

Ny-Hor was a possible Pharaoh from the Predynastic Period. His name means "The Hunter". He may have ruled during the 31st century BCE.