Apries (Ancient Greek : Ἁπρίης) is the name by which Herodotus (ii. 161) and Diodorus (i. 68) designate Wahibre Haaibre, a pharaoh of Egypt (589 BC –570 BC), the fourth king (counting from Psamtik I) of the Twenty-sixth dynasty of Egypt. [2] He was equated with the Waphres of Manetho, who correctly records that he reigned for 19 years. Apries is also called Hophra in Jeremiah 44:30 (Hebrew : חָפְרַע, Modern: Ḥafra', Tiberian: H̱āp̄era'; Greek : Ουαφρη[ς], romanized: Ouafri[s]). [3]

Apries inherited the throne from his father, pharaoh Psamtik II, in February 589 BC and his reign continued his father's history of foreign intrigue in Judean affairs. [1] Apries was an active builder who constructed "additions to the temples at Athribis (Tell Atrib), Bahariya Oasis, Memphis and Sais." [4] In Year 4 of his reign, Apries' sister Ankhnesneferibre was adopted as the new God's Wife of Amun at Thebes. [4] However, Apries' reign was also fraught with internal problems. In 588 BC, Apries dispatched a force to Jerusalem to protect it from Babylonian forces sent by Nebuchadnezzar II (Jer. 37:5; 34:21). His forces quickly withdrew, however, apparently avoiding a major confrontation with the Babylonians. [5] Jerusalem, following an 18-month-long siege, was destroyed by the Babylonians in either 587 BC or 586 BC. Apries's unsuccessful attempt to intervene in the politics of the Kingdom of Judah was followed by a mutiny of soldiers from the strategically important Aswan garrison. [1] [5]

While the mutiny was contained, Apries later attempted to protect Libya from incursions by Dorian Greek invaders, but his efforts backfired spectacularly, as his forces were mauled by the Greek invaders. [1] When the defeated army returned home, a civil war broke out in the Egyptian army between the indigenous troops and the foreign mercenaries. The Egyptians threw their support to Amasis II, a general who had led Egyptian forces in a highly successful invasion of Nubia in 592 BC under Pharaoh Psamtik II, Apries' father. [1] Amasis quickly declared himself pharaoh in 570 BC, and Apries fled Egypt and sought refuge in a foreign country. When Apries marched back to Egypt in 567 BC with the aid of a Babylonian army to reclaim the throne of Egypt, he was likely killed in battle with Amasis' forces. [6] [4] [7] Alternatively, Herodotus (Histories 2.169) holds that Apries survived the battle, and was captured and treated well by the victorious Amasis, until the Egyptian people demanded justice against him, whereby he was placed into their hands and strangled to death. [8] Amasis thus secured his kingship over Egypt and was then its unchallenged ruler.

Amasis, however, reportedly treated Apries' mortal remains with respect and observed the proper funerary rituals by having Apries' body carried to Sais and buried there with "full military honours." [4] Amasis, the former general who had declared himself pharaoh, also married Apries' daughter, Chedebnitjerbone II, to legitimise his accession to power. While Herodotus claimed that the wife of Apries was called Nitetis (in Greek), "there are no contemporary references naming her" in Egyptian records. [4]

Eusebius placed the eclipse of Thales in 585 BC, in the eighth or twelfth year of Apries' reign.

An obelisk which Apries erected at Sais was moved by the 3rd century AD Roman Emperor Diocletian and originally placed at the Temple of Isis in Rome. It is today located in front of the Santa Maria sopra Minerva basilica church in Rome.

Amasis II or Ahmose II was a pharaoh of the Twenty-sixth dynasty of Egypt, the successor of Apries at Sais. He was the last great ruler of Egypt before the Persian conquest. 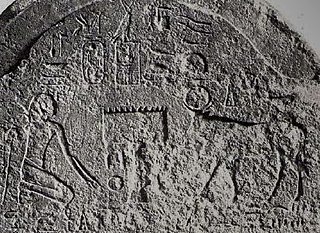 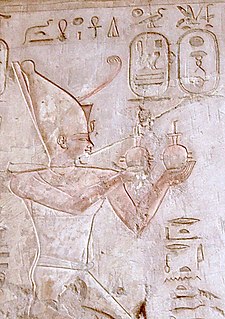 Sais or Sa El Hagar was an ancient Egyptian town in the Western Nile Delta on the Canopic branch of the Nile. It was the provincial capital of Sap-Meh, the fifth nome of Lower Egypt and became the seat of power during the Twenty-fourth Dynasty of Egypt and the Saite Twenty-sixth Dynasty of Egypt during the Late Period. Its Ancient Egyptian name was Zau.

Psamtik III was the last Pharaoh of the Twenty-sixth Dynasty of Egypt from 526 BC to 525 BC. Most of what is known about his reign and life was documented by the Greek historian Herodotus in the 5th century BC. Herodotus states that Psamtik had ruled Egypt for only six months before he was confronted by a Persian invasion of his country led by King Cambyses II of Persia. Psamtik was subsequently defeated at the Battle of Pelusium, and fled to Memphis where he was captured. The deposed pharaoh was carried off to Susa in chains, and later committed suicide.

Naucratis or Naukratis was a city of Ancient Egypt, on the Canopic branch of the Nile river, and 45 mi (72 km) southeast of the open sea and Alexandria. It was the first and, for much of its early history, the only permanent Greek colony in Egypt; it was a symbiotic nexus for the interchange of Greek and Egyptian art and culture.

The year 567 BC was a year of the pre-Julian Roman calendar. In the Roman Empire, it was known as year 187 Ab urbe condita. The denomination 567 BC for this year has been used since the early medieval period, when the Anno Domini calendar era became the prevalent method in Europe for naming years.

Ankhnesneferibre was an ancient Egyptian princess and priestess during the 26th Dynasty, daughter of pharaoh Psamtik II and his queen Takhuit. She held the positions of Divine Adoratrice of Amun and later God's Wife of Amun between 595 and 525 BC, during the reigns of Psamtik II, Apries, Amasis II and Psamtik III, until the Achaemenid conquest of Egypt.

Battus II of Cyrene, sometimes called Eudaimon or the Latin equivalent Felix, was the third Greek king of Cyrenaica and Cyrene and a member of the Battiad dynasty.

The Battle of Pelusium was the first major battle between the Achaemenid Empire and Egypt. This decisive battle transferred the throne of the Pharaohs to Cambyses II of Persia. It was fought near Pelusium, an important city in the eastern extremes of Egypt's Nile Delta, 30 km to the southeast of the modern Port Said, in 525 BC. The battle was preceded and followed by sieges at Gaza and Memphis.

Jeremiah 44 is the forty-fourth chapter of the Book of Jeremiah in the Hebrew Bible or the Old Testament of the Christian Bible. This book contains prophecies attributed to the prophet Jeremiah, and is one of the Books of the Prophets. This chapter is part of a narrative section consisting of chapters 37 to the present one. Chapters 42-44 describe the emigration to Egypt involving the remnant who remained in Judah after much of the population was exiled to Babylon. The Jerusalem Bible describes this chapter as "the last episode of Jeremiah's ministry".

Jeremiah 37 is the thirty-seventh chapter of the Book of Jeremiah in the Hebrew Bible or the Old Testament of the Christian Bible. It is numbered as Jeremiah 44 in the Septuagint. This book contains prophecies attributed to the prophet Jeremiah, and is one of the Books of the Prophets. This chapter is the start of a narrative section consisting of chapters 37 to 44. Chapter 37 records King Zedekiah's request for prayer, Jeremiah's reply to the king, and Jeremiah's arrest and imprisonment.