Last updated June 30, 2020
Wikipedia list article
This list is not, and is not intended to be, exhaustive. To find other taxa which include the names listed here, use the intitle command in the search box

This list of Latin and Greek words commonly used in systematic names is intended to help those unfamiliar with classical languages to understand and remember the scientific names of organisms. The binomial nomenclature used for animals and plants is largely derived from Latin and Greek words, as are some of the names used for higher taxa, such as orders and above. At the time when biologist Carl Linnaeus (1707–1778) published the books that are now accepted as the starting point of binomial nomenclature, Latin was used in Western Europe as the common language of science, and scientific names were in Latin or Greek: Linnaeus continued this practice.

Although Latin is now largely unused except by classical scholars, or for certain purposes in botany, medicine and the Roman Catholic Church, it can still be found in scientific names. It is helpful to be able to understand the source of scientific names. Although the Latin names do not always correspond to the current English common names, they are often related, and if their meanings are understood, they are easier to recall. The binomial name often reflects limited knowledge or hearsay about a species at the time it was named. For instance Pan troglodytes, the chimpanzee, and Troglodytes troglodytes, the wren, are not necessarily cave-dwellers.

Sometimes a genus name or specific descriptor is simply the Latin or Greek name for the animal (e.g. Canis is Latin for dog). These words may not be included in the table below if they only occur for one or two taxa. Instead, the words listed below are the common adjectives and other modifiers that repeatedly occur in the scientific names of many organisms (in more than one genus).

Adjectives vary according to gender, and in most cases only the lemma form (nominative singular masculine form) is listed here. 1st-and-2nd-declension adjectives end in -us (masculine), -a (feminine) and -um (neuter), whereas 3rd-declension adjectives ending in -is (masculine and feminine) change to -e (neuter). For example, verus is listed without the variants for Aloe vera or Galium verum.

The second part of a binomial is often a person's name in the genitive case, ending -i (masculine) or -ae (feminine), such as Kaempfer's tody-tyrant, Hemitriccus kaempferi. The name may be converted into a Latinised form first, giving -ii and -iae instead.

Words that are very similar to their English forms have been omitted.

Some of the Greek transliterations given are Ancient Greek, and others are Modern Greek.

In linguistics, declension is the changing of the form of a word, generally to express its syntactic function in the sentence, by way of some inflection. The inflectional change of verbs is called conjugation. 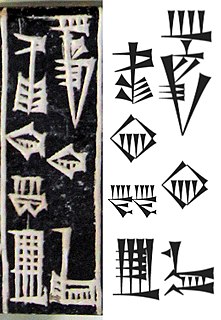 In linguistics, grammatical gender is a specific form of noun class system in which the division of noun classes forms an agreement system with another aspect of the language, such as adjectives, articles, pronouns, or verbs. This system is used in approximately one quarter of the world's languages. In these languages, most or all nouns inherently carry one value of the grammatical category called gender; the values present in a given language are called the genders of that language. According to one definition: "Genders are classes of nouns reflected in the behaviour of associated words."

Latin declension is the set of patterns according to which Latin words are declined, or have their endings altered to show grammatical case, number and gender. Nouns, pronouns, and adjectives are declined, and a given pattern is called a declension. There are five declensions, which are numbered and grouped by ending and grammatical gender. Each noun follows one of the five declensions, but some irregular nouns have exceptions.

The vocative case is used for a noun that identifies a person being addressed or occasionally for the determiners of that noun. A vocative expression is an expression of direct address by which the identity of the party spoken to is set forth expressly within a sentence. For example, in the sentence "I don't know, John," John is a vocative expression that indicates the party being addressed, as opposed to the sentence "I don't know John" in which "John" is the direct object of the verb "know".

The locative case is a grammatical case which indicates a location. It corresponds vaguely to the English prepositions "in", "on", "at", and "by". The locative case belongs to the general local cases, together with the lative and separative case.

In English, the plural form of words ending in -us, especially those derived from Latin, often replaces -us with -i. There are many exceptions, some because the word does not derive from Latin, and others due to custom. Conversely, some non-Latin words ending in -us and Latin words that did not have their Latin plurals with -i form their English plurals with -i. Some words' plurals end in -i even though they are not Latin, or that is not the Latin plural, e.g., octopi is sometimes used as a plural for octopus. Prescriptivists consider these forms incorrect, but descriptivists may simply describe them as a natural evolution of language.

The Spanish language has nouns that express concrete objects, groups and classes of objects, qualities, feelings and other abstractions. All nouns have a conventional grammatical gender. Countable nouns inflect for number. However, the division between uncountable and countable nouns is more ambiguous than in English.

In the Dutch language, the gender of a noun determines the articles, adjective forms and pronouns that are used in reference to that noun. Gender is a complicated topic in Dutch, because depending on the geographical area or each individual speaker, there are either three genders in a regular structure or a two genders in a dichotomous structure. Both are identified and maintained in formal language.

The first declension is a category of declension that consists of mostly feminine nouns in Latin and Ancient Greek with the defining feature of a long ā. In Greek grammar, it is also called the alpha declension, since its forms have the letter α, at least in the plural.

Gothic is an inflected language, and as such its nouns, pronouns, and adjectives must be declined in order to serve a grammatical function. A set of declined forms of the same word pattern is called a declension. There are five grammatical cases in Gothic with a few traces of an old sixth instrumental case.

Officinalis, or officinale, is a Medieval Latin epithet denoting organisms – mainly plants – with uses in medicine and herbalism. It commonly occurs as a specific epithet - the second term of a two-part botanical name. Officinalis is used to modify masculine and feminine nouns, while officinale is used for neuter nouns.

In Ancient Greek, all nouns are classified according to grammatical gender and are used in a number. According to their function in a sentence, their form changes to one of the five cases. The set of forms that a noun will take for each case and number is determined by the declension that it follows.

Old Norse has three categories of verbs and two categories of nouns. Conjugation and declension are carried out by a mix of inflection and two nonconcatenative morphological processes: umlaut, a backness-based alteration to the root vowel; and ablaut, a replacement of the root vowel, in verbs.

Old High German is an inflected language, and as such its nouns, pronouns, and adjectives must be declined in order to serve a grammatical function. A set of declined forms of the same word pattern is called a declension. There are five grammatical cases in Old High German.

In Russian grammar, the system of declension is elaborate and complex. Nouns, pronouns, adjectives, demonstratives, most numerals and other particles are declined for two grammatical numbers and six grammatical cases (see below); some of these parts of speech in the singular are also declined by three grammatical genders. This gives many spelling combinations for most of the words, which is needed for grammatical agreement within and (often) outside the proposition. Also, there are several paradigms for each declension with numerous irregular forms.

Historical linguistics has made tentative postulations about and multiple varyingly different reconstructions of Proto-Germanic grammar, as inherited from Proto-Indo-European grammar. All reconstructed forms are marked with an asterisk (*).