It is a local prison, holding prisoners remanded into custody from courts in the Manchester area and Category A prisoners (those whose escape would be highly dangerous).

Strangeways was designed by Alfred Waterhouse and opened in 1868 alongside the demolished Manchester Assize Courts. The prison is known for its prominent ventilation tower and imposing design, structured by the principles of the separate system.

Construction of the Grade II listed prison was completed in 1869, and it was opened on 25 June 1868, to replace the New Bailey Prison in Salford, which closed in 1868. The prison, designed by Alfred Waterhouse in 1862 with input from Joshua Jebb, [1] cost £170,000, and had a capacity of 1,000 inmates. Its 234 feet (71 m) ventilation tower (often mistaken for a watchtower) has become a local landmark. [2] The prison's walls, which are rumoured to be 16 feet thick, are said to be impenetrable from either inside or out.

The prison has an element of the separate system with its plan in the form of a star or a snowflake, with two blocks housing ten wings that emanate from a central core where the ventilation tower is situated. [3] The prison consists of two radial blocks branching from the central core with a total of ten wings (A, B, C, D, E, F in one block, and G, H, I, K in the second). [4]

The jail was built on the grounds of Strangeways Park and Gardens, from which it was named. Strangeways was recorded in 1322 as Strangwas from the Anglo-Saxon Strang and gewæsc meaning "[a place by] a stream with a strong current".

The prison was open to male and female prisoners until 1963 when the facility became male-only, and in 1980 it began to accept remand prisoners. As of 2005 the prison held more than 1,200 inmates.

As a place of execution

Originally, the prison contained an execution shed in B wing and after World War I a special execution room and cell for the condemned criminal was built. Strangeways was one of the few prisons to have permanent gallows. [2] The first execution at Strangeways was that of twenty-year-old murderer Michael Johnson, who was hanged by William Calcraft on 29 March 1869. [5]

Twenty-nine hangings took place over the next twenty years and 71 took place in the 20th century, bringing the total number to 100. During the second half of the century, the number of executions decreased, with no hangings between 1954 and 28 November 1962, when James Smith was executed. John Robson Walby (alias Gwynne Owen Evans), one of the last two people to be hanged in England, was executed here on 13 August 1964. Out of the 100 hangings, four were double hangings, while the rest were done individually. The "quickest hanging" of James Inglis, in seven seconds, carried out by Albert Pierrepoint, took place here. [6]

The bodies of executed criminals were buried in unmarked graves within the prison walls, as was the custom. During prison rebuilding work in 1991, the remains of 63 executed prisoners (of which 45 were identifiable) were exhumed from unmarked graves in the prison cemetery [8] and cremated at Blackley Crematorium in Manchester. The cremated remains were re-interred in two graves (plot C2710 and C2711) at the adjacent cemetery. [9] [10]

The following people were hanged at Manchester Prison between 1869 and 1964:

Between 1 April and 25 April 1990, 147 staff and 47 prisoners were injured in a series of riots by prison inmates. There was one fatality among the prisoners, and one prison officer died from heart failure. [11] Much of the old prison was damaged or destroyed in the rioting. Several inmates were charged with various offences, and Paul Taylor and Alan Lord faced a five-month trial as ringleaders.

The riots resulted in the Woolf Inquiry, and the prison was rebuilt and renamed Her Majesty's Prison, Manchester. Repair and modernisation cost more than £80 million after the riot, and rebuilding was completed in 1994. [12]

The prison is a high-security category A prison for adult males and has a maximum capacity of 1,269 as of 4 August 2008. Operation of the prison was put out to tender in 1994 and 2001. [4] Accommodation is divided into nine wings in two radial blocks. Cells are a mixture of single and double occupancy, all having in-cell power points and integral sanitation.

In 2015, The Daily Telegraph reported that a drone aircraft was being used in an attempt to deliver drugs and smartphones to precise locations within the prison. [15]

In 2017, a report by the Independent Monitoring Board described Manchester Prison as squalid, vermin infested and reminiscent of Dickensian England. The report added that the prison urgently needed modernisation and assaults on staff have risen owing to staff shortages. [16]

In 2016, Nicky Reilly, also known as Mohammed Saeed Alim, a Muslim convert was found dead in his cell after hanging himself. Reilly had a chronic history of self harm, he suffered from Asperger's Syndrome and a personality disorder. A jury decided it was "more likely than not" that he did not intend to die and "acted impulsively." It is unclear if Reilly understood the concept of death or could form the intent to die. Senior coroner, Joanne Kearsley said evidence given at the court raised "significant concerns." Kearsley said she was not convinced the prison had a clear plan and awareness of his needs and she questioned why he was not under a care programme approach (CPA) where care coordinators are given to individual prisoners. The coroner asked whether a type of review should be considered for prisoners with recognised lifelong mental health problems and chronic risk of self-harm. [17] 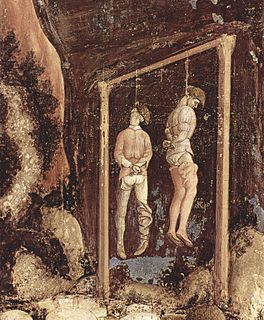 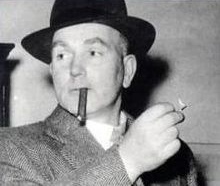 Albert Pierrepoint was an English hangman who executed between 435 and 600 people in a 25-year career that ended in 1956. His father, Henry, and uncle Thomas were official hangmen before him. 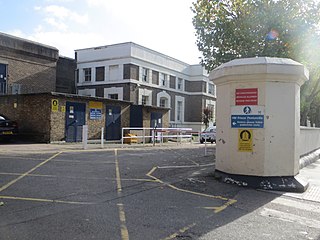 HM Prison Pentonville is an English Category B men's prison, operated by Her Majesty's Prison Service. Pentonville Prison is not in Pentonville, but is located further north, on the Caledonian Road in the Barnsbury area of the London Borough of Islington, north London. In 2015 the justice secretary, Michael Gove, described Pentonville as “the most dramatic example of failure” within the prisons estate.

HM Prison Wandsworth is a Category B men's prison at Wandsworth in the London Borough of Wandsworth, South West London, England. It is operated by Her Majesty's Prison Service and is one of the largest prisons in the UK.

James Inglis was a British man executed for murder, at the age of 29.

HM Prison Shrewsbury was a Category B/C men's prison in Shrewsbury, Shropshire, England. It closed in March 2013.

HM Prison Leicester is a local men's prison, located on Welford Road in the centre of Leicester, Leicestershire, England. The term 'local' means that the prison holds people on remand to the local courts, as well as sentenced prisoners. Leicester Prison is operated by Her Majesty's Prison Service, and is situated immediately north of Nelson Mandela Park.

Syd Dernley was appointed assistant executioner by the Home Office in 1949, and participated in 20 hangings until he was replaced in 1954. Execution by hanging continued in Britain until 1964. 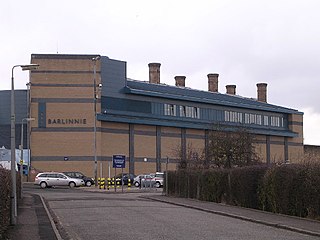 HM Prison Barlinnie is the largest prison in Scotland. It is operated by the Scottish Prison Service and is located in the residential suburb of Riddrie, in the north east of Glasgow, Scotland. It is informally known locally as The Big Hoose and Bar-L. In 2018, plans for its closure were announced.

Albert Pierrepoint (1905–1992) was the most prolific British hangman of the twentieth century, executing 435 men and women between 1932 and 1955. This table records the locations of each of the executions he participated in, the numbers in brackets being the number of executions he was assistant executioner at, the other numbers are those in which he officiated as chief executioner.

HM Prison Lincoln is a Category B men's prison, located in Lincoln, Lincolnshire, England. The prison is operated by Her Majesty's Prison Service. A category B prison which allocates convicted prisoners within its catchment area.

Pankrác Prison, officially Prague Pankrác Remand Prison, is a prison in Prague, Czech Republic. A part of the Czech Prison Service, it is located southeast of Prague city centre in Pankrác, not far from Pražského povstání metro station on Line C. It serves partially as a prison for persons awaiting trial and partially for convicted inmates. Since 2008, women have also been incarcerated here.

HMP Shepton Mallet, sometimes known as Cornhill, is a former prison located in Shepton Mallet, Somerset, England. When it closed in 2013, it was the United Kingdom's oldest operating prison, and had been since the closure of HMP Lancaster Castle in 2011. Before closure Shepton Mallet was a category C lifer prison holding 189 prisoners. The prison building is grade II* listed, while the former gatehouse and perimeter walls are grade II. 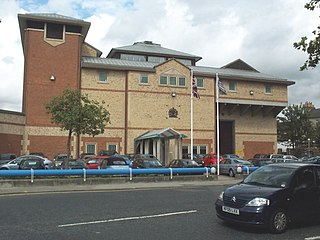 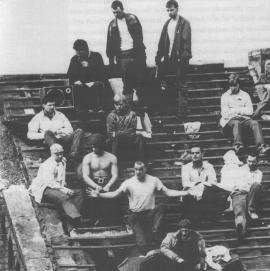 The 1990 Strangeways Prison riot was a 25-day prison riot and rooftop protest at Strangeways Prison in Manchester, England. The riot began on 1 April 1990 when prisoners took control of the prison chapel, and the riot quickly spread throughout most of the prison. The riot and rooftop protest ended on 25 April when the final five prisoners were removed from the rooftop, making it the longest prison riot in British penal history. One prisoner was killed during the riot, and 147 prison officers and 47 prisoners were injured. Much of the prison was damaged or destroyed with the cost of repairs coming to £55 million. 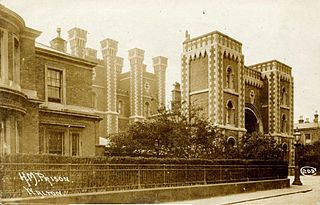