Manchester Velodrome is an indoor Olympic-standard cycle-racing track in Manchester, England, which opened in 1994. Part of the National Cycling Centre, the facility has been home to British Cycling since 1994 and the five time Tour de France-winning UCI ProTeam Team Sky since it formed in 2009. The Manchester Velodrome has been cited as the major catalyst for Britain's successes in track and road cycling and has been described by Cycling Weekly as the "beating heart of British Cycling’s ascension to the top of world cycling". [5] [6] [7]

For 18 years from opening, it was the only indoor Olympic-standard track in the United Kingdom before the completion of the Lee Valley VeloPark for the 2012 Summer Olympics and is one of the busiest velodromes in the world used by both professional cyclists and members of the public from 8am to 10pm. [8] [9] [10]

The venue hosted track cycling for the 2002 Commonwealth Games and forms part of the Sportcity complex, located adjacent to the City of Manchester Stadium, host stadium for the 2002 Games and home of Manchester City F.C. It has also hosted the UCI Track Cycling World Championships in 1996, 2000 and 2008, hosts regular meets of the Revolution track cycling series and now hosts Six-day racing. The National Indoor BMX Arena adjacent opened in 2011 and the Velodrome can be accessed from the Metrolink Velopark tram stop on the East Manchester Line.

The Manchester Velodrome was developed as a joint venture between Sport England, Manchester City Council and British Cycling, who recognised the need for an Olympic-standard facility in the United Kingdom to improve British track cycling. Funding was provided by the government, through the Department of the Environment (£6.5m), the Sports Council (£2m) and the Foundation for Sport and the Arts (£1m). Manchester City Council is the freehold owner and the centre is managed by the Eastlands Trust (formerly named the Velodrome Trust). [2] The Velodrome was dismissed by some as a potential white elephant prior to opening – concerns that were later unfounded with the facility well used by the public and a key part of Britain's ascension to the top of track cycling. [11] [12] [13] [14]

The velodrome was designed by FaulknerBrowns Architects and has garnered a reputation for speed since its opening. [15] The centre's roof structure is based around a 122-metre, 200 tonne arch allowing for an unrestricted viewing area for spectators. Covered by an aluminium roof, the total structure weighs around 600 tonnes. The track is 250 metres long and its bankings reach 42 degrees in the middle. [2] The track is as steep at the top as it is on the black (racing) line. On 21 May 2007 the velodrome closed for resurfacing in Siberian pine at a cost of £400,000. It reopened on 16 July 2007, and is considered a smoother ride. [16]

The UCI hour record set by Boardman in the Best Human Effort category in 1996, [17] was rescinded by UCI in 2000 and subsequent attempts at breaking Eddy Merckx's 1972 record stopped as UCI believed advanced bicycle technology gave cyclists too much help. [18] Boardman set out to break the record on a bike comparable to Eddy Merckx's 1972 machine. He surpassed the record at the velodrome in 2000, achieving a distance of 49.444km as against the 1972 record of 49.431 km, and then retired. [19]

The velodrome has become a popular venue for cyclists with taster and practice sessions frequently booked up several weeks in advance. [20] In 2011, the National Indoor BMX Arena was opened next to the velodrome. [21] Plans proposed in 2012 included a mountain bike trail on Clayton Vale, which would be the first facility of its kind in the United Kingdom and would aim to replicate Britain's performance on the track in mountain biking. [22]

The Revolution Series opened in 2003 to build on events such as the world championships and World Cup meetings and provide more regular events. There were four Revolution events over the winter of 2003–04. They built good crowds. The seventh, in 2005, sold all the seats with further fans standing. The first official sell-out was Revolution 14. The series of sprint and endurance events runs on Saturday nights. Internationals compete with British stars and up-and-coming talent. Some riders have retired at Revolution events, rewarded with a retirement presentation. A Future Stars competition has races for young riders aged 15 or 16 to test their sprint and endurance. Olympic riders Jason Kenny and Steven Burke came up through this series. In 2012 it was announced that Revolution events would take place at the recently opened London Velodrome and Glasgow Velodrome from 2013.

On 2 July 2009 Kraftwerk performed at the velodrome as part of the 2009 Manchester International Festival. As they performed Tour de France , four members of the British Olympic cycling team entered and rode laps of the track.

A list of notable events which Manchester Velodrome has hosted:

Anna Maree Devenish Meares is an Australian retired track cyclist. She currently resides in Adelaide in South Australia where the Australian Institute of Sport's Track Cycling program has its headquarters at the Adelaide Super-Drome. 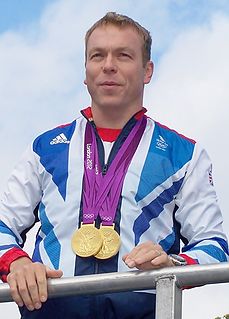 Sir Christopher Andrew Hoy, MBE is a British racing driver and former track cyclist who represented Great Britain at the Olympic and World Championships and Scotland at the Commonwealth Games.

Craig MacLean MBE is a Scottish track cyclist who has represented Great Britain and Northern Ireland at the 2000 Summer Olympics in Sydney and the 2004 Summer Olympics in Athens, winning a Silver Medal in the Team Sprint at the 2000 Olympics. As a sighted guide, McLean returned to the sport in its Paralympic form, piloting Neil Fachie to two gold medals in the 2011 UCI Para-cycling Track World Championships, and Anthony Kappes to a gold medal in the 2012 Paralympic Games. MacLean is only the second athlete, after Hungarian fencer Pál Szekeres, ever to win medals at both the Olympic and Paralympic Games.

Catherine Rachel "Katie" Prankerd is a Welsh road and track cyclist and a member of the Podium Ambition Pro Cycling squad. 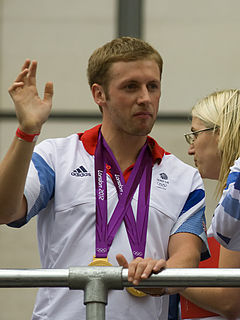 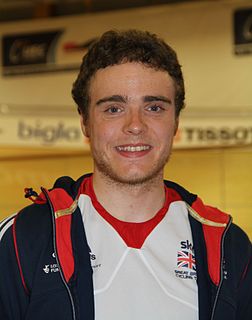 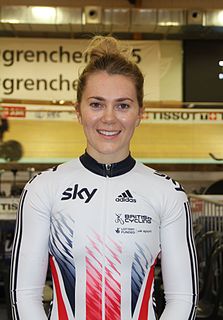 Jessica "Jess" Varnish is a British track cyclist. Varnish is part of the reigning world record holding European team sprint champions and is a bronze medalist at the World Championships for the 500 metres.

Emma Davies Jones is a British Olympic cyclist. She competed in the 2000 and 2004 Summer Olympics.

Frances Newstead is an English road and track cyclist from Holmfirth, West Yorkshire. 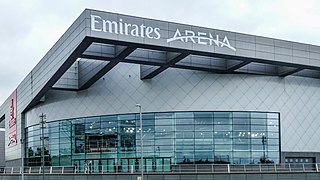 Danielle 'Dani' Rowe MBE is a British former road and track cyclist. She retired from cycling in December 2018. 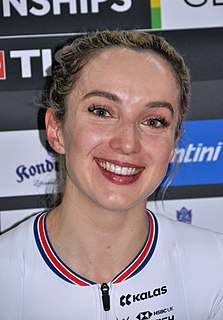 The HSBC UK National Cycling Centre is a multipurpose cycling venue in Sportcity, Manchester, United Kingdom. It includes an indoor Velodrome and a BMX arena and outdoor mountain bike trials. It also has offices for British Cycling, the governing body for cycling in Britain.

Dannielle Jade Khan is an English racing cyclist, who currently rides for Belgian amateur team ILLI Bikes. She won the sprint and 500m TT events at the Juniors world championships in 2013, as well as the silver medal in the Keirin.

The 2018–19 Six Day Series (also known as the Six Day Cycling Series is a multi six-day track cycling race tournament over a season. It is the 3rd series organised by the Madison Sports Group. This season consists of 7 events across 5 countries.