The hospital was founded in 1814 on the initiative of William James Wilson and opened in King Street the following year. [1] It moved to Faulkner Street in 1827, to Princess Street in 1874 and to St John's Street in 1882, before re-locating to a facility designed by Pennington & Bridgen in Oxford Road which was built between 1884 and 1886. [1] The building was damaged by a large bomb in the German air raid on 23 December 1940. A doctor and a nurse were killed. [2] The building became Grade II listed in 1974 and has since been converted for other uses. [3]

Services moved to a new building on the Royal Infirmary site accessible to patients in 2009 and officially opened by the Queen in 2012. [4] Meanwhile a new biomedical centre, Citylabs, was constructed on the old site, using both the frontage of the old Royal Eye Hospital building and a new 94,000 sq ft building at the rear, also opening in 2012. [5]

In November 2013 the Macular Society conducted a survey of NHS trusts not meeting critical four-week follow-up times to administer drugs that reverse or arrest macular degeneration and found that the hospital was struggling because it had "experienced a significant increase in demand coinciding with the introduction of a new treatment for patients with macular degeneration." [6]

Consultant Ophthalmologist Paulo Stanga fitted the world's first visual prosthesis, an Argus retinal prosthesis for a patient with age-related macular degeneration to Ray Flynn, 80, in July 2015 at the hospital. He is the first person in the world to have both artificial and natural vision combined. [7] Professor Stanga said "As far as I am concerned, the first results of the trial are a total success and I look forward to treating more dry AMD patients with the Argus II as part of this trial. We are currently recruiting four more patients to the trial in Manchester." [8]

The hospital started a contract with EMS Healthcare in November 2015 to provide a mobile medical unit for up to 40 patients a day with wet age-related macular degeneration operating at Trafford General Hospital. [9] 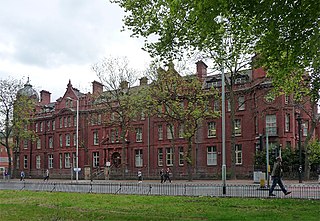 Manchester Royal Infirmary is a hospital in Manchester, England, founded by Charles White in 1752. It is now part of Manchester University NHS Foundation Trust, sharing buildings and facilities with several other hospitals.

Salford Royal NHS Foundation Trust operates Salford Royal Hospital. It is one of the top performing trusts in the United Kingdom. The trust is currently under the leadership of chair Jim Potter and chief executive Raj Jain. 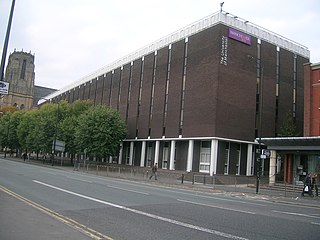 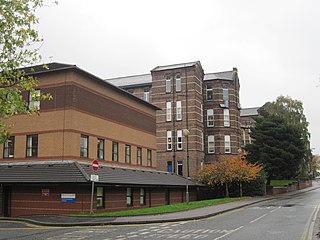 North Manchester General Hospital is a large NHS hospital located in Crumpsall in the north of the English city of Manchester. It is operated as part of the Pennine Acute Hospitals NHS Trust. There is an accident and emergency unit, together with a maternity unit, high dependency unit and a mental health wing.

The Royal United Hospital (RUH) is a major acute-care hospital, located in the Weston suburb of Bath, England, which lies approximately 1.5 miles (2.4 km) west of the city centre. The hospital has 565 beds and occupies a 52 acres (21 ha) site. It is the area's major accident and emergency hospital, with a helicopter landing point on the adjacent Lansdown Cricket Club field. The hospital is operated by the Royal United Hospitals Bath NHS Foundation Trust.

Western Eye Hospital is an ophthalmology hospital in west London. It is managed by the Imperial College Healthcare NHS Trust.

The University Hospital of South Manchester NHS Foundation Trust is a defunct NHS foundation trust that previously operated Wythenshawe Hospital, a major acute teaching hospital in Wythenshawe, Manchester. Many of the services and facilities previously at Withington Hospital were transferred to Wythenshawe in 2004. It provided services for adults and children at Wythenshawe Hospital and Withington Community Hospital. It runs Buccleuch Lodge Intermediate Care Unit and the Dermot Murphy Centre in Withington, and the Specialised Ability Centre in Sharston.

A visual prosthesis, often referred to as a bionic eye, is an experimental visual device intended to restore functional vision in those suffering from partial or total blindness. Many devices have been developed, usually modeled on the cochlear implant or bionic ear devices, a type of neural prosthesis in use since the mid-1980s. The idea of using electrical current to provide sight dates back to the 18th century, discussed by Benjamin Franklin, Tiberius Cavallo, and Charles LeRoy.

The UCL Institute of Ophthalmology is an institute within the Faculty of Brain Sciences of University College London (UCL) and is based in London, United Kingdom. The Institute conducts research and post-graduate teaching in the area of ophthalmology.

Salford Royal Hospital, is a large university teaching hospital in Pendleton, Salford, England operated by Salford Royal NHS Foundation Trust. It is one of the top performing hospitals in the United Kingdom.

EMS Healthcare is a supplier of mobile medical equipment based in Ellesmere Port.