Built as a Methodist central hall in 1908 by the architect William James Morley of Bradford and built by J. Gerrard & Sons Ltd of Swinton, it has been designated by English Heritage as a Grade II listed building. [3] The main floor was used as a nightclub from 1999 to 2011. The second floor, the Chapel Hall, unused since 1969, was renovated in 2012–14 for music concerts. [4]

The venue hosted a few events towards the end of 2013. It officially reopened on 6 February 2014, with a performance by Anna Calvi.

The hall was designed in eclectic style with Baroque and Gothic elements for the Wesleyan Mission in 1908. A meeting hall is on the first floor with a horseshoe gallery, sloping floor and coloured glass rooflights. The finely detailed terracotta is formed into large windows at gallery level, and the interior is abundant in floral decoration in the plaster work and glazed tiles. [5] [6]

In the 1990s, the lower two floors were converted into a nightclub called Brannigans which closed in 2011. [7] The hall was refurbished and re-opened in 2013 by Trof, a local independent bar and live music company. [8] [9]

The Royal Albert Hall is a concert hall on the northern edge of South Kensington, London. One of the United Kingdom's most treasured and distinctive buildings, it is held in trust for the nation and managed by a registered charity. It can seat 5,272.

The Haçienda was a nightclub and music venue in Manchester, England, which became famous in the Madchester years of the 1980s and early 1990s. The Haçienda opened in 1982, and despite considerable and persistent financial troubles survived until 1997—the club was mainly supported by record sales from New Order. The Haçienda is associated with the rise of acid house and rave music. 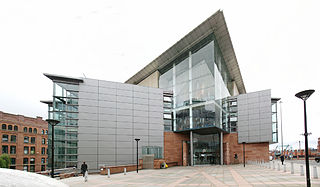 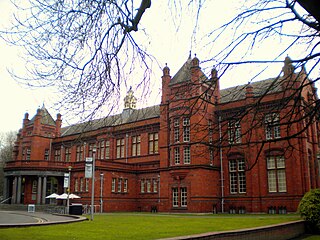 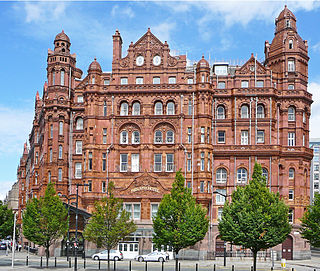 The Hippodrome is a building on the corner of Cranbourn Street and Charing Cross Road in the City of Westminster, London. The name was used for many different theatres and music halls, of which the London Hippodrome is one of only a few survivors. Hippodrome is an old word referring to places of entertainment where horse races and the like were staged.

The Twisted Wheel was a nightclub in Manchester, England, open from 1963 to 1971. It was one of the first clubs to play the music that became known as Northern Soul.

The Manchester Academy is composed of four concert venues, located on the campus of the University of Manchester, in Manchester, England. The four venues are: Academy 1, 2 and 3 and Club Academy. Utilized by the Students' Union, the venues are housed in two buildings, the original Students' Union built in 1957 and the Academy, built in 1990. In 2004, after the merging of the universities, the venues carried the "Academy" moniker.

The Wigan Casino was a nightclub in Wigan, England. Operating between 1973 and 1981, it became known as a primary venue for Northern soul music. It carried forward the legacy created by clubs such as the Twisted Wheel in Manchester, the Chateau Impney (Droitwich), the Catacombs (Wolverhampton) and the Golden Torch. It remains one of the most famous clubs in Northern England. In 1978, the American music magazine Billboard voted Wigan Casino "The Best Disco in the World", ahead of New York's Studio 54. 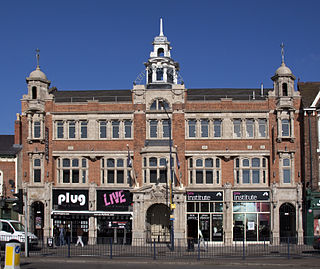 The O2 Institute (originally known as the Digbeth Institute) is a music venue located in Birmingham, England. The venue opened in 1908 as a mission of Carrs Lane Congregational Church. It has also served as an event centre, civic building and nightclub.

Cleethorpes Pier is a pleasure pier in the town of Cleethorpes, North East Lincolnshire, England. It originally cost £8,000, which was financed by the Manchester, Sheffield and Lincolnshire Railway. It was officially opened on August Bank Holiday Monday 1873.

Dave Haslam is a writer, broadcaster and DJ who DJ'ed over 450 times at the Haçienda nightclub in Manchester and has since DJ'd worldwide. He has written for the New Musical Express, The Guardian, the London Review of Books, and The Times, and has published four books.

The O2 Ritz (originally known as The Ritz) is a live music venue on Whitworth Street West, Manchester, England. Built in 1927, it was designated a Grade II listed building in 1994. The venue is notable for its sprung dance floor. The Ritz was taken over by HMV in 2011 and given a £2 million refurbishment. 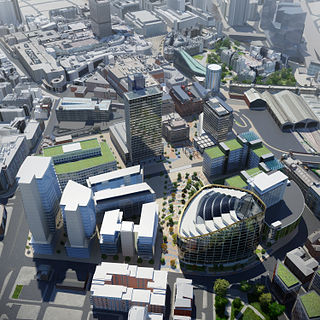 This is a timeline of notable events in the history of the lesbian, gay, bisexual and trans community in Manchester.