The Lamiaceae ( /ˌleɪmiˈeɪsi.iː,-aɪ/ LAY-mee-AY-see-ee, -⁠eye) [3] or Labiatae are a family of flowering plants commonly known as the mint, deadnettle or sage family. Many of the plants are aromatic in all parts and include widely used culinary herbs like basil, mint, rosemary, sage, savory, marjoram, oregano, hyssop, thyme, lavender, and perilla, as well as other medicinal herbs such as catnip, salvia, bee balm, wild dagga, and oriental motherwort. Some species are shrubs, trees (such as teak), or, rarely, vines. Many members of the family are widely cultivated, not only for their aromatic qualities, but also their ease of cultivation, since they are readily propagated by stem cuttings.[ citation needed ] Besides those grown for their edible leaves, some are grown for decorative foliage. Others are grown for seed, such as Salvia hispanica (chia), or for their edible tubers, such as Plectranthus edulis , Plectranthus esculentus , Plectranthus rotundifolius , and Stachys affinis (Chinese artichoke). Many are also grown ornamentally, notably coleus, Plectranthus , and many Salvia species and hybrids.

The alternative family name Labiatae refers to the flowers typically having petals fused into an upper lip and a lower lip (labia in Latin). The flowers are bilaterally symmetrical with five united petals and five united sepals. They are usually bisexual and verticillastrate (a flower cluster that looks like a whorl of flowers, but actually consists of two crowded clusters). Although this is still considered an acceptable alternative name, most botanists now use the name Lamiaceae in referring to this family. The leaves emerge oppositely, each pair at right angles to the previous one (decussate) or whorled. The stems are frequently square in cross section, [10] but this is not found in all members of the family, and is sometimes found in other plant families.

The circumscription of several genera has changed since 2004. Tsoongia, Paravitex, and Viticipremna have been sunk into synonymy with Vitex. [14] Huxleya has been sunk into Volkameria. [7] Kalaharia, Volkameria, Ovieda, and Tetraclea have been segregated from a formerly polyphyletic Clerodendrum. [7] Rydingia has been separated from Leucas. [15] The remaining Leucas is paraphyletic over four other genera. [16]

Most of the genera of Lamiaceae have never been sampled for DNA for molecular phylogenetic studies. [17] Most of those that have been are included in the following phylogenetic tree. The phylogeny depicted below is based on seven different sources. [5] [9] [7] [14] [18] [19] [20]

Leonotis is a genus of flowering plants in the family Lamiaceae. One species, Leonotis nepetifolia, is native to tropical Africa and southern India. It is naturalized throughout most of the tropics. The other species are endemic to southern + eastern Africa.

The Verbenaceae, the verbena family or vervain family, is a family of mainly tropical flowering plants. It contains trees, shrubs, and herbs notable for heads, spikes, or clusters of small flowers, many of which have an aromatic smell. 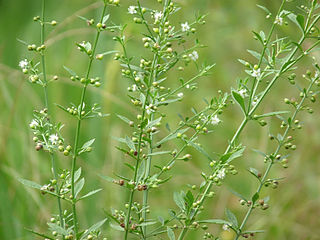 Plantaginaceae, the plantain family, is a large, diverse family of flowering plants in the order Lamiales that includes common flowers such as snapdragon and foxglove. It is unrelated to the banana-like fruit also called "plantain." In older classifications, Plantaginaceae was the only family of the order Plantaginales, but numerous phylogenetic studies, summarized by the Angiosperm Phylogeny Group, have demonstrated that this taxon should be included within Lamiales. 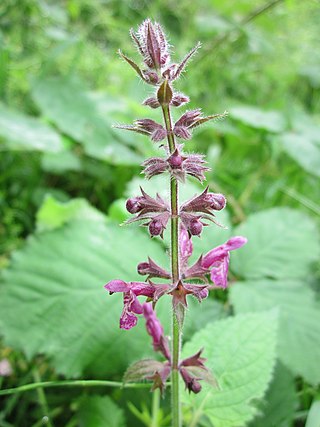 Stachys is a genus of plants, one of the largest in the mint family Lamiaceae. Estimates of the number of species vary from about 300, to about 450. Stachys is in the subfamily Lamioideae and its type species is Stachys sylvatica. The precise extent of the genus and its relationship to other genera in the subfamily are poorly known.

Phrymaceae, also known as the lopseed family, is a small family of flowering plants in the order Lamiales. It has a nearly cosmopolitan distribution, but is concentrated in two centers of diversity, one in Australia, the other in western North America. Members of this family occur in diverse habitats, including deserts, river banks and mountains.

Clinopodium is a genus of flowering plants in the family Lamiaceae. It is in the tribe Mentheae of the subfamily Nepetoideae, but little else can be said with certainty about its phylogenetic position.

Volkameria is a genus of flowering plants in the family Lamiaceae. It is pantropical in distribution. Many of the species are found in coastal habitats.

Vitex is a genus of flowering plants in the sage family Lamiaceae. It has about 250 species. Common names include chaste tree or chastetree, traditionally referring to V. agnus-castus, but often applied to other species, as well.

Rosmarinic acid, named after rosemary, is a polyphenol constituent of many culinary herbs, including rosemary, perilla, sage, mint, and basil. 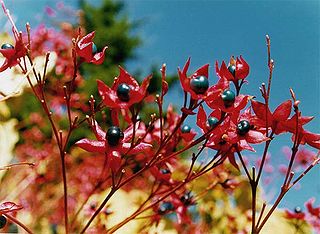 Clerodendrum is a genus of flowering plants formerly placed in the family Verbenaceae, but now considered to belong to the Lamiaceae (mint) family. Its common names include glorybower, bagflower and bleeding-heart. It is currently classified in the subfamily Ajugoideae, being one of several genera transferred from Verbenaceae to Lamiaceae in the 1990s, based on phylogenetic analysis of morphological and molecular data.

Oxera is a genus of flowering plants in the family Lamiaceae native to Vanuatu and New Caledonia in the western Pacific. 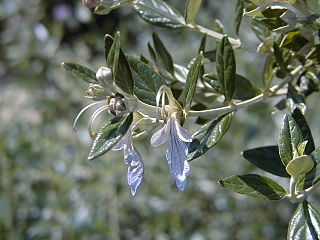 Ajugoideae is subfamily of the family Lamiaceae. The subfamily name of Teucrioideae is a synonym of Ajugoideae. 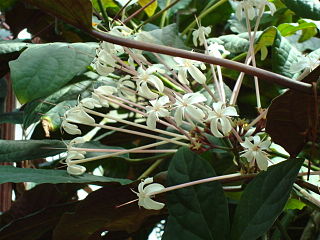 Clerodendrum quadriloculare is a species of flowering plant native to New Guinea and the Philippines. It is one of many species previously included in the family Verbenaceae, but transferred to the Lamiaceae based on molecular studies. The plants produce flowers which look good in a garden, but it can be difficult to eradicate. 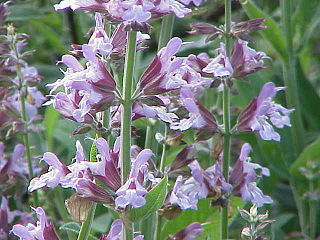 Salvia is the largest genus of plants in the sage family Lamiaceae, with nearly 1000 species of shrubs, herbaceous perennials, and annuals. Within the Lamiaceae, Salvia is part of the tribe Mentheae within the subfamily Nepetoideae. One of several genera commonly referred to as sage, it includes two widely used herbs, Salvia officinalis and Salvia rosmarinus.

Rotheca is a genus of flowering plants in the family Lamiaceae. Estimates of the number of species in the genus vary from about 35 to as many as 60. Three of the species are native to tropical Asia, with the rest occurring in Sub-Saharan Africa. The type species for the genus is Rotheca serrata. It had originally been named Rotheca ternifolia, but this name is now considered illegitimate. 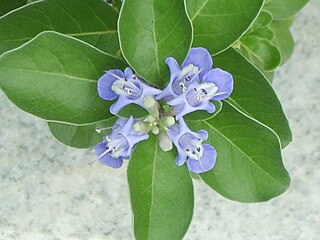 Vitex rotundifolia, the roundleaf chastetree or beach vitex, is a species of flowering plant in the sage family Lamiaceae. It is native to seashores throughout the Pacific. Its range includes continents and islands stretching from India east to Hawaii and from Korea south to Australia. This shrub typically grows approximately 1 m in height. It has a sprawling growth habit and produces runners that root regularly at nodes. This rooting pattern allows the plant to spread rapidly. At maturity, V. rotundifolia produces blue-purple flowers that are borne in clusters and ultimately yield small brown-black fruits. Its leaves are rounded at the tips with green upper surfaces and silver lower surfaces. While the plant is a seashore obligate, it grows over a wide latitude range. It has been used for medicinal purposes throughout its native range. More recently, it was imported to the eastern United States where it has become a seashore invasive. Control efforts are presently underway to protect the fragile beach dune ecosystem.

Ovieda is a genus of flowering plant in the family Lamiaceae, first described for modern science in 1753. It contains only one known species, Ovieda spinosa , endemic to the Island of Hispaniola in the West Indies.

Nepetoideae is a subfamily of plants in the family Lamiaceae.

Lamioideae is a subfamily of plants in the family Lamiaceae.