Jacqueline Joyner-Kersee (born March 3, 1962) is a retired American track and field athlete, ranked among the all-time greatest athletes in the heptathlon as well as long jump. She won three gold, one silver, and two bronze Olympic medals in those two events at four different Olympic Games. Sports Illustrated for Women magazine voted Joyner-Kersee the Greatest Female Athlete of All-Time. She is on the Board of Directors for USA Track & Field (U.S.A.T.F.), the national governing body of the sport. [2]

Joyner-Kersee is an active philanthropist in children's education, racial equality and women's rights. [3] She is a founder of the Jackie Joyner-Kersee Foundation, which encourages young people in East St. Louis to pursue athletics and academics. [3] She partnered with Comcast to create the Internet Essentials program in 2011, which costs $9.95/month for low-income Americans and offers low-cost laptops and 40 hours/month of high-speed internet service. Since its inception, it has provided internet access to 4 million Americans. [3] [4] [5]

Joyner-Kersee is one of the most famous athletes to have overcome severe asthma. [6]

Jacqueline Joyner was born March 3, 1962, in East St. Louis, Illinois, and was named after Jacqueline Kennedy, the First Lady of the United States. [7] As a high school athlete at East St. Louis Lincoln Senior High School, she qualified for the finals in the long jump at the 1980 Olympic Trials, finishing 8th behind another high schooler, Carol Lewis. [8] She was inspired to compete in multi-disciplinary track & field events after seeing a 1975 made-for-TV movie about Babe Didrikson Zaharias. Didrikson, the track star, basketball player, and pro golfer, was chosen the "Greatest Female Athlete of the First Half of the 20th Century. Fifteen years later, Sports Illustrated for Women magazine voted Joyner-Kersee the greatest female athlete of all time, just ahead of Zaharias.

She scored 1,169 points during her collegiate career, which places her 19th all time for the Bruins games. [12] The Bruins advanced to the West Regional semi-finals of the 1985 NCAA Women's Division I Basketball Tournament before losing to eventual runner-up Georgia. [12]

Joyner competed in the 1984 Summer Olympics in Los Angeles and won the silver medal in the heptathlon. She was the favorite heading into the event, but finished five points behind Australian Glynis Nunn. [16] She also placed fifth in the long jump. [17]

Joyner was the first woman to score over 7,000 points in a heptathlon event (during the 1986 Goodwill Games). In 1986, she received the James E. Sullivan Award as the top amateur athlete in the United States.

Joyner-Kersee was everyone's favorite to retain both her World titles earned four years earlier in Rome. However, her challenge was dramatically halted when, having won the long jump easily with a 7.32 m (24 ft 1⁄4 in) jump no one would beat, she slipped on the take off board and careened head first into the pit, avoiding serious injury. She did, however, strain a hamstring, which led to her having to pull out of the heptathlon during the 200 m at the end of the first day.

In the 1992 Summer Olympics in Barcelona, Spain, Joyner-Kersee earned her second Olympic gold medal in the heptathlon. She also won the bronze medal in the long jump which was won by her friend Heike Drechsler of Germany. [17]

At the Olympic Trials, Joyner-Kersee sustained an injury to her right hamstring. When the 1996 Summer Olympics in Atlanta, Georgia began, Joyner-Kersee was not fully recovered by the time the heptathlon started. After running the first event, the 100 m hurdles, the pain was unbearable and she withdrew. [7] [19] She was able to recover well enough to compete in the long jump and qualify for the final, but was in sixth place in the final with one jump remaining. Her final jump of 7.00 m (22 ft 11+1⁄2 in) was long enough for her to win the bronze medal. [17] The Atlanta Olympics would be the last Olympics of Joyner-Kersee's long competitive career.

In 1996 Joyner-Kersee signed on to play pro basketball for the Richmond Rage of the fledgling American Basketball League. Although she was very popular with the fans, she was less successful on the court. She appeared in only 17 games, and scored no more than 15 points in any game. [7]

Returning to track, Joyner-Kersee won the heptathlon at the 1998 Goodwill Games, scoring 6,502 points. [7]

Since 1981, the Jesse Owens Award is given by USATF (and before its renaming, TAC) the United States' track and field "athlete of the year." In 1996, the award was split to be given to the top athlete of each gender. In 2013, the Female award was renamed the Jackie Joyner-Kersee Award.

As of October 2019 [update] , Joyner-Kersee holds the world record in heptathlon along with the top six all-time best results whilst her long jump record of 7.49 m is second on the long jump all-time list. In addition to heptathlon and long jump, she was a world class athlete in 100 m hurdles and 200 meters being as of June 2006 [update] in top 60 all time in those events.

Sports Illustrated voted her the greatest female athlete of the 20th century.

Joyner-Kersee has consistently maintained that she has competed throughout her career without performance-enhancing drugs. [26] [27]

In 2000, Kersee played herself in an episode of The Jersey called "Legacy" [28] where Nick Lighter (played by Michael Galeota) uses a magical jersey by jumping into her body as he is coached by her husband (played by Bob Kersee) on how to put the shot for a track and field competition. 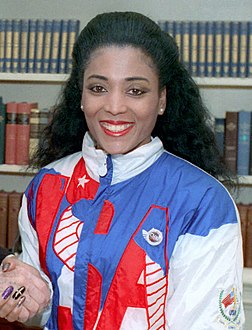 Florence Delorez Griffith Joyner, also known as Flo-Jo, was an American track and field athlete. She is the fastest woman of all time; the world records she set in 1988 for both the 100 m and 200 m still stand. During the late 1980s she became a popular figure due to both her record-setting athleticism and flashy personal style.

Alfrederick "Al" Joyner is an American track and field coach and former athlete. He was born in East St. Louis, Illinois. He is the 1984 Olympic gold medalist in the triple jump. He was also the coach and husband of the late four-time Olympic medalist Florence Griffith Joyner and is the brother of six-time Olympic medalist Jackie Joyner-Kersee.

The Women's Long Jump at the 1988 Summer Olympics in Seoul, South Korea had an entry list of 32 competitors, with two qualifying groups before the final (12) took place on Thursday September 29, 1988. 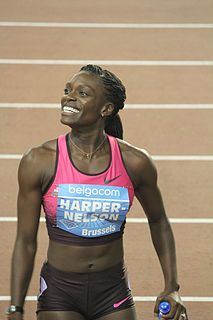 Dawn Harper-Nelson is an American track and field athlete who specializes in the 100-meter hurdles. She was the gold medalist in the event at the 2008 Beijing Olympic Games and the silver medalist in the 2012 London Olympic Games and the 2017 World Championships. Dawn Harper is the first American 100-meter hurdler to ever win gold at an Olympics and medal in the following Olympics. She is trained by Bob Kersee, husband of Jackie Joyner-Kersee, six time Olympic medalist also from her hometown of East St. Louis, Illinois.

The Jesse Owens Award is an annual track and field award that is the highest accolade given out by USA Track & Field (USATF). As the country's highest award for the sport, it bears Jesse Owens's name in recognition of his significant career, which included four gold medals at the 1936 Olympic Games. First awarded in 1981 to hurdler Edwin Moses, it was created to recognize the season's top American performer in track and field competitions. In 1996, the award was divided into two categories, with both a male and female winner. The 1996 winners, Michael Johnson and Gail Devers, each won two gold medals at that year's Olympics in Atlanta. Up until 2008, the award was voted on by members of the United States athletics media only, but in 2009 fans were able to vote via the USATF website, with their opinions contributing 10% of the overall result.

Diane Claire Guthrie-Gresham is a retired female track and field athlete from Jamaica, who specialized in the Long Jump and Heptathlon during her career.

Ryann Krais is an American athlete. She is a gold and bronze medalist from the 2007 World Youth Championships. 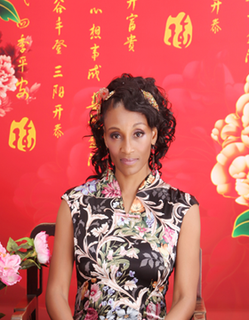 Angela Taylor is a scholar in China, a retired American athlete and collegiate coach. She earned nine Gateway titles at Illinois State University. She was a three-time indoor long jump champion and won the 60-meter high hurdles in 1987. In her post-collegiate athletic career, she competed against Jackie Joyner-Kersee in the women's heptathlon and was a member of various U.S. national teams and a finalist in the heptathlon in the 1992 Olympics trials. She finished 1992 ranked 30th in the world.

Jacquelyn Kate "Jackie" Johnson is an American heptathlete. She is a four-time NCAA outdoor champion, and a three-time NCAA indoor champion (2006–2008) while competing for Arizona State University. She also set a personal best of 6,347 points by placing second at the 2008 U.S. Olympic Trials in Eugene, Oregon, which guaranteed her a qualifying place for the Olympics. Johnson was a member of the track and field team for the Arizona State Sun Devils, where she wa coached and trained by Dan O'Brien, gold medalist in the decathlon at the 1996 Summer Olympics in Atlanta, Georgia. In 2008, she won the Honda Sports Award as the nation's best female collegiate track and field athlete.

Maren Elizabeth Seidler is a retired American track and field athlete. She dominated the shot put from the mid 1960s through 1980. She won the event at the USA Outdoor Track and Field Championships eleven times starting in 1967, including nine in a row from 1972 to 1980. She was the American champion indoors nine times, 1968-9, 1972, 1974-5 and 1977 to 1980. She won her event at the United States Olympic Trials four straight times 1968-1980, a feat only equalled by only one woman, Madeline Manning, Edwin Moses is the only man to achieve four. Jackie Joyner Kersee is the only woman who has won more events at the Olympic Trials, split between the long jump and heptathlon. She competed in the Olympics three times, making the final twice. Her 1980 selection was quashed by the 1980 Summer Olympics boycott. Seidler did however receive one of 461 Congressional Gold Medals created especially for the spurned athletes. 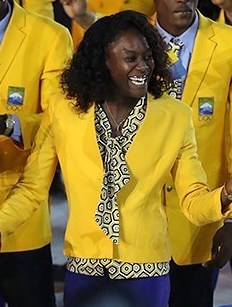