Lexington is an independent city in the Commonwealth of Virginia. At the 2020 census, the population was 7,320. [4] It is the county seat of Rockbridge County, [5] although the two are separate jurisdictions. The Bureau of Economic Analysis combines the city of Lexington (along with nearby Buena Vista) with Rockbridge County for statistical purposes. Lexington is about 57 miles (92 km) east of the West Virginia border and is about 50 miles (80 km) north of Roanoke, Virginia. It was first settled in 1778.

Lexington is the location of the Virginia Military Institute (VMI) and of Washington and Lee University (W&L).

Lexington was named in 1778. It was the first of what would be many American places named after Lexington, Massachusetts, known for being the place at which the first shot was fired in the American Revolution. [6]

The Union General David Hunter led a raid on Virginia Military Institute during the American Civil War. Robert E. Lee and Thomas "Stonewall" Jackson are buried in the city. It is the site of the only house Jackson ever owned, now open to the public as a museum. [7] Cyrus McCormick invented the horse-drawn mechanical reaper at his family's farm in Rockbridge County, [8] and a statue of McCormick is located on the Washington and Lee University campus. [9] McCormick Farm is now owned by Virginia Tech and is a satellite agricultural research center. [10]

According to the U.S. Census Bureau, the city has a total area of 2.5 square miles (6.5 km2), virtually all of which is land. [11] The Maury River, a tributary of the James River, forms the city's northeastern boundary.

The climate in this area is characterized by hot, humid summers and generally mild to cool winters. According to the Köppen climate classification system, Lexington has a humid subtropical climate, similar to Northern Italy, abbreviated "Cfa" on climate maps. [12] Average monthly temperatures range from 34.9 °F in January to 75.2 °F in July. [13] The hardiness zone is 7a. [14]

Today, Lexington's primary economic activities stem from higher education and tourism. With its various connections to the Civil War, Lexington attracts visitors from around the country. Places of interest in Lexington include the Stonewall Jackson House, University Chapel, the George C. Marshall Museum, Virginia Military Institute Museum, Museum of Military Memorabilia, and the downtown historic district. Hull's Drive In theater attracts visitors to the area and was the first community-owned, non-profit drive-in in the U.S.

The News-Gazette is the weekly community paper; it also produces a free shopper known as The Weekender. The now-defunct The Rockbridge Weekly, noted for printing police and other local crime reports, was bought by The News-Gazette in June 2012. The Rockbridge Advocate is a monthly news magazine with the motto "Independent as a hog on ice". The Ring-tum Phi , student newspaper of W&L, has been published since 1897 (with a suspension for World War II). [25]

Lexington is located at the intersection of historic U.S. Route 11 and U.S. Route 60 and more modern highways, Interstate 64 and Interstate 81. RADAR Transit operates the Maury Express, which provides local bus service to Lexington and Buena Vista. [27] The Virginia Breeze provides intercity bus service between Blacksburg and Washington, D.C., with a stop in Lexington. [28]

The 1938 movie, Brother Rat , which starred Ronald Reagan, was shot in Lexington. After the release, Reagan was made an honorary VMI cadet. The 1958 Mardi Gras starred Pat Boone as a VMI cadet appearing with actress Christine Carère. Sommersby from 1993 starred Richard Gere, Bill Pullman, James Earl Jones, and Jodie Foster. Foreign Student , released in 1994, was based on a novel of college life by former W&L student Phillipe Labro with related scenes made in town. [29] In Fall 2004, the director Steven Spielberg and Tom Cruise filmed scenes for War of the Worlds here, with Dakota Fanning and Tim Robbins. In June 2013, filming took place for a movie titled Field of Lost Shoes about the Battle of New Market starring Luke Benward and Lauren Holly.

Filming for parts of several Civil War films also took place in Lexington, including the documentary Lee Beyond the Battles and Gods and Generals .

In 2011, the city erupted in controversy after the City Council passed an ordinance to ban the flying of flags other than the United States flag, the Virginia Flag, and an as-yet-undesigned city flag on city light poles. Various flags of the Confederacy had previously been flown on city light poles to commemorate the Virginia holiday, Lee–Jackson Day, which is observed on the Friday before Martin Luther King, Jr. Day. [30] About 300 Confederate flag supporters, including members of the Sons of Confederate Veterans, rallied before the City Council meeting, [31] and after the vote the Sons of Confederate Veterans vowed to challenge the new local ordinance in court. [30] Previously, flags such as the Washington and Lee University and Virginia Military Institute flags had also been flown on city light poles, but the practice is now discontinued due to the city's ordinance.[ citation needed ]

In 2014, a large Confederate battle flag and a number of related state flags were removed from Lee Chapel at Washington and Lee University. The flags were moved to a rotating display at the Lee Chapel Museum. [32] [33]

Westmoreland County is a county located in the Northern Neck of the Commonwealth of Virginia. As of the 2020 census, the population sits at 18,477. Its county seat is Montross. 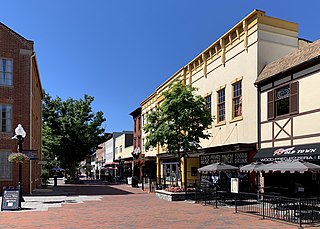 Winchester is the northernmost independent city in the Commonwealth of Virginia, United States. It is the county seat of Frederick County, although the two are separate jurisdictions. The Bureau of Economic Analysis combines the city of Winchester with surrounding Frederick County for statistical purposes. As of the 2020 census, the city's population was 28,120.

Spotsylvania County is a county in the U.S. state of Virginia. As of the July 2021 estimate, the population was 143,676. Its county seat is Spotsylvania Courthouse. 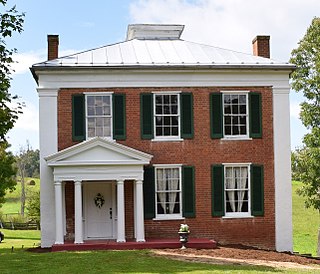 Emporia is an independent city in the Commonwealth of Virginia, surrounded by Greensville County, United States. Emporia and a predecessor town have been the county seat of Greensville County since 1791. As of the 2010 census, the population was 5,766, making it the second-least populous city in Virginia. The Bureau of Economic Analysis combines the city of Emporia with surrounding Greensville County for statistical purposes.

Covington is an independent city in the Commonwealth of Virginia. As of the 2020 census, the population was 5,737, making it the second-least populous city in Virginia. It is surrounded by Alleghany County, of which it is also the county seat. Located at the confluence of Jackson River and Dunlap Creek, Covington is one of three cities in the Roanoke Regional Partnership. The Bureau of Economic Analysis combines the city of Covington with Alleghany county for statistical purposes.

Buena Vista is an independent city located in the Blue Ridge Mountains region of Virginia in the United States. As of the 2020 census, the population was 6,641. The Bureau of Economic Analysis combines the independent cities of Buena Vista and Lexington, along with surrounding Rockbridge County, for statistical purposes.

Appomattox County is a United States county located in the Piedmont region and near the center of the Commonwealth of Virginia. The county is part of the Lynchburg, VA Metropolitan Statistical Area, and its county seat is the town of Appomattox. 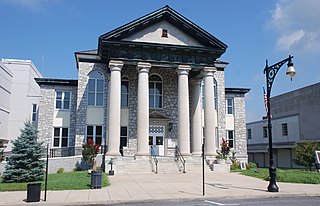 Alleghany County is an American county located on the far western edge of Commonwealth of Virginia. It is bordered by the Allegheny Mountains, from which the county derives its name, and it is the northernmost part of the Roanoke Region. The county seat is Covington. As of the 2020 census, the population was 15,223. 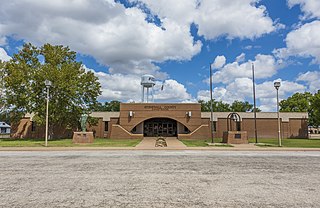 Stonewall County is a county located in the U.S. state of Texas. As of the 2020 census, its population was 1,245. Its county seat is Aspermont. The county was created in 1876 and organized in 1888. It is named for Stonewall Jackson, a general of the Confederate States Army.

Lee County is a county located in the U.S. state of Texas. As of the 2020 census, its population was 17,478. Its county seat is Giddings. The county is named for Confederate General Robert E. Lee and has many Confederate memorials and monuments to the Confederate States of America.

Stonewall is an unincorporated community and census-designated place (CDP) in Gillespie County, Texas, United States. The population was 525 at the 2010 census. It was named for Confederate General Thomas J. (Stonewall) Jackson, by Israel P. Nunez who established a stage station near the site in 1870.

New Market is a town in Shenandoah County, Virginia, United States. Founded as a small crossroads trading town in the Shenandoah Valley, it has a population of 2,146 as of the most recent 2010 U.S. census. The north–south U.S. 11 and the east–west U.S. 211 pass near it and cross Massanutten Mountain at the town's titular gap. 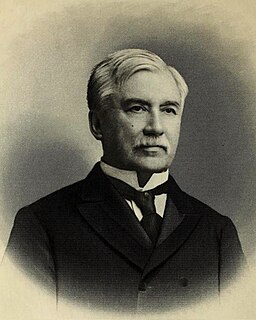 William Alexander Anderson was a Virginia lawyer, Confederate soldier and Democratic politician, who served in both houses of the Virginia General Assembly, twice won election as Attorney General of Virginia, and also served as rector of his alma mater, Washington & Lee University. 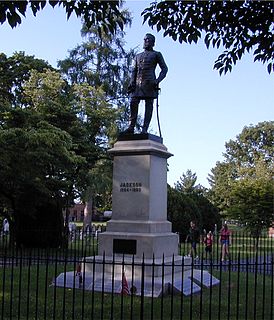 The Oak Grove Cemetery, originally known as the Presbyterian Cemetery, is located on South Main Street in downtown Lexington, Virginia, less than a mile from the campuses of Washington and Lee University and the Virginia Military Institute. The cemetery was renamed in 1949 as the Stonewall Jackson Memorial Cemetery after the Confederate general, who was buried here in 1863. The current name dates to September 3, 2020. Also buried here are 144 Confederate veterans, two Governors of Virginia, and Margaret Junkin Preston, the "Poet Laureate of the Confederacy".

The 1st Rockbridge Artillery was a light artillery battery in the Confederate States Army during the American Civil War.

Since the 1960s, many municipalities in the United States have removed monuments and memorials on public property dedicated to the Confederate States of America, and some, such as Silent Sam in North Carolina, have been torn down by protestors. Efforts to remove Confederate memorials increased in the late 2010s after high-profile incidents including the Charleston church shooting (2015), the Unite the Right rally (2017), and the murder of George Floyd (2020). The removals have been driven by historical analysis that the monuments express and re-enforce white supremacy; memorialize an unrecognized, treasonous government, the Confederacy, whose founding principle was the perpetuation and expansion of slavery; and that the presence of these Confederate memorials over a hundred years after the defeat of the Confederacy continues to disenfranchise and alienate African Americans.

Wikisource has the text of a 1911 Encyclopædia Britannica article about Lexington, Virginia .
This page is based on this Wikipedia article
Text is available under the CC BY-SA 4.0 license; additional terms may apply.
Images, videos and audio are available under their respective licenses.