Trust Bank Building is a skyscraper in the Central Business District of Johannesburg, South Africa. It was built in 1970 to a height of 140 metres. The building is the former head office of Trust Bank of South Africa, and as such has one of the largest bank vaults in South Africa. The building was sold in February 2003 for Rand 6.4 million (USD $640,000). Like most skyscrapers in Johannesburg the height is 140m which is the same height as KwaDukuza eGoli Hotel, Michelangelo Towers, ABSA Tower and Standard Bank Centre which are all 140m tall.

Ponte City is a skyscraper in the Berea neighbourhood of Johannesburg, South Africa, just next to Hillbrow. It was built in 1975 to a height of 173 m (567.6 ft), making it the tallest residential skyscraper in Africa. The 55-story building is cylindrical, with an open centre allowing additional light into the apartments. The centre space is known as "the core" and rises above an uneven rock floor. When built, Ponte City was seen as an extremely desirable address due to its views over all of Johannesburg and its surroundings. The neon sign on top of the building is the largest sign in the southern hemisphere and advertised for the Coca-Cola Company prior to 2000. It currently advertises the South African mobile phone company Vodacom.

The Southern Life Centre is an international style skyscraper in the Central Business District of Johannesburg, South Africa. construction started in 1970 and was completed in 1973 to a height of 138 metres (453 ft).The building has 30 floors .It is also known as African Eagle Life Centre/Momentumn Life Centre. It is notable for having a pyrimide glass shape on its roof.The building is also used for advertising.The skyscraper is located at 45 Commissioner Street 323 m North West of Standard Bank Centre .It is the 15th tallest building in South Africa. The Architects was Monty, Sack, Nurcombe, Summerley, Ringrose and Partners And Structural Engineeriners were Ove Arup and Partners 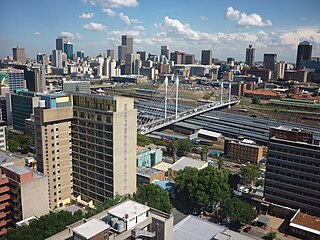 Johannesburg is the capital of the Gauteng province and the financial hub of South Africa. Founded in 1886, the city is located in the Witwatersrand region, which has vast gold deposits. The town experienced rapid growth as the gold deposits were exploited, and is now South Africa's largest urban center. As a result, the Johannesburg area has a wide variety of architecture, from early Art Nouveau to Postmodern buildings. Hillbrow, for example, contains many buildings constructed since the 1950s, including the Hillbrow Tower.