Kaizer Chiefs Football Club (often known as Chiefs) is a South African professional football club based in Naturena, Johannesburg South, that plays in the Premier Soccer League. The team is nicknamed AmaKhosi, which means "Lords" or "Chiefs" in Zulu, and the Phefeni Glamour Boys. Chiefs have won 13 league titles (four in the PSL era) and over 50 club trophies. As a result, they hold the most trophies amongst all clubs in South Africa and are the most successful team in South African football history since the start of the top flight in 1970. They are the most supported club in the country, drawing an average home attendance of 16,144 in the 2019–20 season, the highest in the league. The team plays its home matches at the 94,797-capacity FNB Stadium. [1]

The Kaizer Chiefs were banned by the African Football (CAF) from competing in African club competitions until 2009 after their abrupt withdrawal from the 2005 CAF Confederation Cup. This was the second time in four years that Chiefs had been penalized by CAF for refusal to participate in a competition.

It is the most supported team in sub-Saharan Africa. Kaizer Chiefs had a support base of over 16,000,000 at the turn of the century. Today, it is estimated at approximately 40,000,000 fans across Southern Africa, the majority of the fanbase in South Africa and neighbouring countries. In January 2020, Kaizer Chiefs celebrated their 50th anniversary. [2]

Kaiser Chiefs, the British indie rock/britpop band, was named after the club because Lucas Radebe, a former player of Kaizer Chiefs, captained Leeds United, the team that the band members all supported. [3]

Kaizer Chiefs were founded in January 1970 shortly after the return of Kaizer "Chincha Guluva" Motaung from the United States where he played as a striker for the Atlanta Chiefs of the North American Soccer League (NASL). He combined his own first name with the Atlanta Chiefs to create the name of Kaizer Chiefs. Several other people have played key roles in the formation and growth of Kaizer Chiefs, including the late Gilbert Sekgabi, Clarence Mlokoti, China Ngema, Ewert "The Lip" Nene, and Rabelani Jan Mofokeng, he trailed and quit because of work. [4]

Kaizer Chiefs are known as "Amakhosi" by its fans, a Zulu word meaning "kings" or "chiefs". Their headquarters is Kaizer Chiefs Village, in Naturena, six kilometres south of Johannesburg. [4]

The 2001–02 season was one of the Club's most successful in their history as well as their most tragic. They won four major trophies in four months; the Vodacom Challenge, the BP Top Eight, the Coca-Cola Cup, and the African Cup Winners' Cup. [5] At the time the team was said to have been a team that was on "Operation vat alles" by its then public relations officer Putco Mafani, "vat alles" being an Afrikaans statement meaning "take everything" in English. However, the highs of cup wins was contrasted by the lows of the Ellis Park Stadium disaster on 11 April 2001, in which 43 fans were crushed to death during the Soweto Derby between Chiefs and their arch-rivals Orlando Pirates. [6]

By winning the African Cup Winners' Cup, Chiefs played the 2001 CAF Champions League winners Al Ahly of Egypt in the 2002 CAF Super Cup. In April 2002, Kaizer Chiefs' achievements during 2001 were recognized as they were chosen as the "CAF Club of the Year" by the Confederation of African Football. [4]

In the 2003–04 season Chiefs were given the Fair Play Award at the Peace Cup in South Korea. Chiefs ended the season as league champions, winning the PSL for the first time in their history. [7]

During the championship race of the 2004–05 soccer season, Chiefs overtook the season-long leaders (Orlando Pirates) in the last game of the season to defend its PSL championship. Under the leadership of Romanian coach Ted Dumitru, Zambian striker Collins Mbesuma had a record-breaking season scoring 39 goals in all competitions. [8]

Kaizer Chiefs' forays into Africa were temporarily scuttled by a Confederation of African Football (CAF) ban. [9] However, it still made its presence felt through the annual Vodacom Challenge that pit Kaizer Chiefs and Orlando Pirates with an invited European club. Chiefs have won the Vodacom Challenge Cup 5 times since its inception. They beat a young Manchester United side 4–3 on penalties in the 2006 Challenge to win the trophy. [10]

In March 2007, coach Ernst Middendorp and the club parted company. The club instantly appointed their rival Orlando Pirates' former coach Kosta Papić for the remainder of the 2006–07 season.[ citation needed ]

Muhsin Ertuğral returned for the 2007–08 season to begin his second stint with Chiefs, having already coached The Glamour Boys from 1999 until 2003. [11]

On 26 June 2021, the team secured their first CAF Champions League final appearance after defeating Wydad AC by a 1–0 aggregate. [12]

On 9 July 2021, Kaizer Chiefs confirmed through Twitter that they signed six players for next season after their transfer ban ended. [13] On 17 July 2021, they lost 3–0 against Al Ahly in the Champions League Final. [14]

During the past years, the Amakhosi have used no less than nine stadiums in Johannesburg as their home ground, and often rotated between several stadiums during the season. In August 2006, the club made a strategic decision to sign a "mutual interest agreement" with a stadium developer and the local municipality regarding the construction of a new permanent home venue for Kaizer Chiefs, at a total planned cost of R1.2 billion (£105m), which was to be partly owned by the club. This future home venue was named Amakhosi Stadium, and will be situated in Krugersdorp, roughly 40 km west of Johannesburg. Initially it was planned to open in December 2008, but according to the latest revised construction plan, it is now expected only to be finalised by August 2012. The planned stadium was redesigned into a cheaper project, with a new price tag at R700 million, and the capacity being reduced from 55,000 to 35,000 seats. [15] As part of the new revised construction plan for the stadium, it was announced by Kaizer Chiefs, that they no longer plan to be one of the owners of the stadium, but remain ready to support the stadium as a long time committed tenant.

The new stadium was initially planned to be part of a greater sports precinct, into which the club would also move its entire "Kaizer Chiefs Youth Development Programme". The Gauteng Provincial Government have agreed to develop the needed infrastructures around the stadium, in order to guarantee sufficient road and railway access for the huge crowd of spectators.

The stadium developers initially had set time lines for the Amakhosi stadium, to open its doors for the public in December 2008. As of July 2010, construction however had not yet started. Kaizer Chiefs announced in August 2010, that construction of Amakhosi Stadium was now expected only to start in autumn 2010, and finalised by August 2012. It had been postponed several years, due to Kaizer Chiefs and its joint partners, facing difficulties to finance the construction. For the football seasons in 2010–12, the team instead planned to use Rand Stadium as their home venue. [16]

Kaizer Chiefs however only played four of their 15 home games at Rand Stadium in 2010–11, due to some experienced capacity problems, with the transportation related infrastructures around the stadium -and a low spectator attendance. Instead the team during this season, played most of their home games, at the big FNB Stadium -Soccer City. [17]

FNB Stadium is a stadium located in Johannesburg, with a capacity of 94,736 seats. It is located next to the South African Football Association headquarters (SAFA House), where both the FIFA offices and the Local Organising Committee for the 2010 FIFA World Cup is housed. [18]

The Soweto Derby between Kaizer Chiefs and Orlando Pirates is one of the most fiercely contested matches in world football, and in contrast to most other games in the South African Premier Soccer League, always attracts a large fanbase.

On 29 October 2012, Kaizer Chiefs announced that they had registered a rugby sevens team to participate in the inaugural 7s Premier League. [22]

The South African Premier Division, officially referred to as the DStv Premiership for sponsorship purposes, is the premier men's professional football/soccer league and the highest division in the league system of South Africa, organized since 1996.

Theophilus "Doctor" Doctorson Khumalo, also known as Doctor Khumalo, is a South African former soccer player. He is best known for being a star midfielder for Kaizer Chiefs as well as the South African national team. Khumalo is regarded as one of the best South African midfielders of his generation.

Dr Kaizer Motaung Snr OIS is a former South African association football player and founder of Kaizer Chiefs FC, of which he is chairman and managing director. He was nicknamed "Chincha Guluva".

Collins Mbesuma is a Zambian professional footballer who plays for South African club Pretoria Callies. He is nicknamed The Hurricane or Ntofontofo. 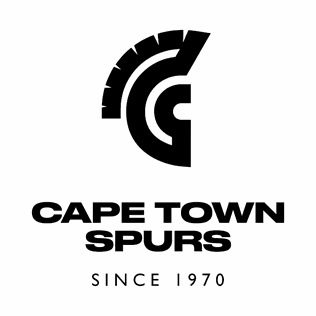 CapeTownSpursF.C. is a South African professional football club based in Parow in the city of Cape Town that plays in the National First Division. Dutch Eredivisie club AFC Ajax was their parent club and majority shareholder after a merger of both Cape Town Spurs and Seven Stars in January 1999 until selling its shares in September 2020.

Isaac Chansa, popularly known as "Zife", is a Zambian professional footballer who plays as a midfielder for Forest Rangers in the Zambia Super League.

The 1996–97 Premier Soccer League, known as the 1996–97 Castle Premiership for sponsorship purposes, was the first season of the newly established top-flight professional football league in South Africa. The league was an 18-team competition established in 1996 by Irvin Khoza, Kaizer Motaung, Raymond Hack and Jomo Sono in conjunction with the South African Football Association and it would run parallel to the European football calendar.

Theodore "Ted" Dumitru was a Romanian football manager who is best known for his time in South Africa. Dumitru was one of few coaches who have led South Africa's 'big three' clubs Kaizer Chiefs, Sundowns and Orlando Pirates.

The Soweto Derby is a football rivalry between Premier Soccer League's Kaizer Chiefs and Orlando Pirates in South Africa. It was first contested on 24 January 1970. Matches between the two rivals attract a large fanbase.

Kaizer Chiefs B is a South African football (soccer) club based in Johannesburg that plays in the DSTV Reserve League.

The 2021–22 South African Premier Division season from 20 August 2021 to 30 May 2022 was the 26th season of the Premier Soccer League since its establishment in 1996. Mamelodi Sundowns were the four-time defending champions. This season's winner will qualify for the 2022–23 CAF Champions League along with the second placed team. The 3rd placed team and Nedbank Cup winners qualify for the 2022–23 CAF Confederation Cup.