Tsakane is a township located in Ekurhuleni, Gauteng, South Africa. It was established during the early 1960s due to Apartheid's segregationist policies and was formally founded as a designated area. Tsakane is a Tsonga word which means joy or happiness.

Tsakane has one public hospital called Pholosong. The hospital serves a population of 900,000 people from Tsakane, KwaThema and Duduza. There is one public clinic and other smaller surgeries and clinics in the township that take care of the health of the people around the township of Tsakane. Clinics help patients with health issues such as high blood pressure, cancer, HIV/AIDS blood tests and treatment, etc.

Economic development in Tsakane is centred in the area around the mall which also accommodates the police station, the Magistrates court, the stadium and the Municipal offices. There are 4 Shoprite stores in Tsakane and the malls and shopping complexes are forever busy throughout the week especially around the end of the month. There is a range of housing in Tsakane. Residences range from middle class houses (Ext 1,5,8 & 11) normal houses (central) to RDP houses (Mandela village, Ext 9,12,13,15 & 19).

Tsakane has two shopping centers, [4] Tsakane Corner and The Square, and other smaller shopping centers which are located in different sections of the township: Duduza Rank, Extension 11 and Extension 19. Tsakane mall is not very big but has many stores and banks. Two well known supermarkets in the mall that most people buy food from are Shoprite and Spar. Shoprite is also found in the other two shopping centers: Extension 11 and Extension 19 shopping centers. There are fast-food restaurants, clubs such as Dinangwe, Siyas Lounge and Tight Corner and other places that people go to on special occasions, such as on public holidays. Tsakane also boasts an active night life with bars such as: Chillas, Dinangwe and Welcome's place. The people of Tsakane like to eat out and support their local township food businesses which sell bunny chow or "kota" as it is referred to.

Tsakane has one major stadium, Tsakane Stadium. [5] The stadium is not large enough to host matches between big soccer teams like Orlando Pirates and Kaizer Chiefs. Although lately the stadium has hosted some matches between the reserve teams of these big cubs in a tournament called the Diski Challenge. In addition to soccer games, the stadium is also often used for local activities such as government functions, school sports days, music festivals and religious gatherings.

The African School for Excellence

The African School for Excellence (ASE) is currently the only private school located in Tsakane. The ASE model was designed specifically to address the needs and challenges of township secondary school scholars. The main difference between it and government public schools in Tsakane is that ASE uses the Cambridge curriculum. [6]

Tsakane also has a local magazine. 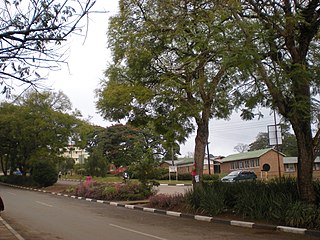 Mzuzu is the capital of Malawi's Northern Region and is the third largest city by population, in Malawi. The city has 221,272 residents and 20,000 commuters with about 1.7 million people living around the outskirts of the city. It is situated in Mzimba District. Mzuzu lies in a gap in the Viphya Mountains, and the agricultural region surrounding the city specialises in tea, rubber and coffee cultivation. The Viphya Plantation south of the city is the largest man-made forest in Africa, and the Lunyangwa and Kaning'ina forest reserves lie east of the city.

Laudium is an Indian township in southwest of central Pretoria, in the City of Tshwane Metropolitan Municipality. Claudius is a residential suburb that is effectively an extension of Laudium.

Springs is a former independent city, now part of the City of Ekurhuleni based in the east of Johannesburg in Gauteng province of South Africa. It lies 50 km (31 mi) east of Johannesburg and 72 km (45 mi) southeast from Pretoria. The name of Springs derives from the large number of springs in the area; it has an estimated population of more than 121,610 in 2011 and is situated at 1628 m (5,340 ft) a.s.l.

Welkom is the second-largest city in the Free State province of South Africa, located about 140 kilometres (90 mi) northeast of Bloemfontein which is the provincial capital. Welkom is also known as Circle City, City Within A Garden, Mvela and Matjhabeng. The city's Sotho name, Matjhabeng means 'where nations meet', derived from the migrant labour system, where people of various countries such as Lesotho, Malawi and Mozambique etc. met to work in the mines of the gold fields.

Secunda is a town built amidst the coalfields of the Mpumalanga province of South Africa. It was named for being the second Sasol extraction refinery producing oil from coal, after Sasolburg, some 140 kilometres (87 mi) to the west. 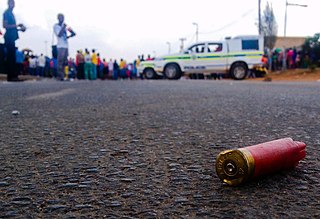 Orange Farm ("Farma") is a township located approximately 45 km (28 mi) from Johannesburg in the Gauteng Province of South Africa. It is the southernmost township of the City of Johannesburg Metropolitan Municipality. Its name, a misnomer given that oranges are grown in orchards instead of farms, has Dutch origins. It is one of the youngest townships in South Africa, with the original inhabitants, laid-off farm workers, taking up residency in 1988. Support for the population came slowly mostly from people who were tenants at the larger township of Soweto.

Mamelodi, part of the City of Tshwane Metropolitan Municipality, is a township set up by the then apartheid government northeast of Pretoria, Gauteng, South Africa. 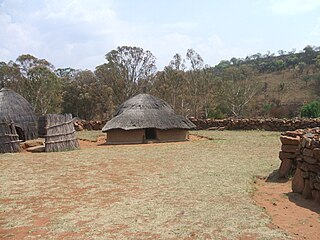 Inanda or eNanda is a township in KwaZulu-Natal, South Africa that is situated 30 km north-west of the Durban CBD; it forms part of eThekwini, the Greater Durban Metropolitan Municipality. Populated primarily by Zulu-speaking Black Africans, Inanda Township is the home of John Langalibalele Dube, first president of the African National Congress (ANC), as a residence/base of operations of Mahatma Gandhi, and as birthplace of the syncretic Nazareth Baptist Church 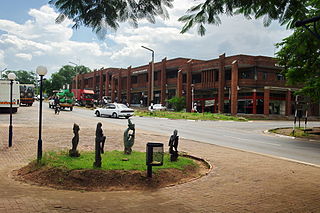 Victoria Falls, popularly known as, Vic Falls, is a resort town and city in the province of Matabeleland North, Zimbabwe. It lies on the southern bank of the Zambezi River at the western end of Victoria Falls themselves. According to the 2012 Population Census, the town had a population of 33,060.

Umlazi is a township in KwaZulu-Natal, South Africa, located south-west of Durban. It is the fourth largest township in South Africa, after Soweto, Tembisa and Katlehong. Umlazi is the only township in the country that has its own registration plate, which is NUZ. It is divided into 26 sections, A through to Z, with the exception of I, O and X, but with an addition of AA, BB and CC.

Bophelong meaning 'a place of life' is a township near Vanderbijlpark, Gauteng, South Africa. It was established in 1955 to house black residents who worked in Vanderbijlpark and Vereeniging.

Lebowakgomo is the seat of the Lepelle-Nkumpi Local Municipality and was the capital of the former Bantustan of Lebowa. Lebowakgomo lies 45 km southeast of the Limpopo capital of Polokwane. The majority of Lebowakgomo's inhabitants speak SePedi.

Osizweni is a town in Newcastle, KwaZulu-Natal, South Africa, situated 24 kilometres (15 mi) from Newcastle CBD. Osizweni is one of the largest townships in the province with an estimated population of 80,000 people.

Phoenix is a South African town about 25 kilometres northwest of Durban Central, in KwaZulu-Natal, South Africa. It was established as a town by the apartheid government in 1976, but it has a long history of Indian occupation. It is associated with the Phoenix Settlement, built by Mahatma Gandhi.

Motherwell is a township in the Eastern Cape province of South Africa. It forms part of the Nelson Mandela Bay Metropolitan Municipality which is the metropolitan area comprising Gqeberha, Despatch, Kariega and other surrounding towns. 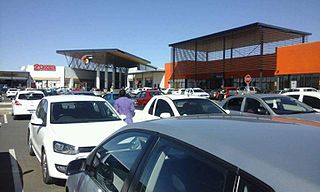 Thabong is the second largest township after botshabelo in the Free State province in South Africa. The township was established during the years of segregation of black people as well as the township of Bronville for coloured people adjacent to the city of Welkom, to accommodate workers at the world's richest gold mines.