Wits University Football Club, also known as Wits FC, is the football club representing the University of the Witwatersrand based in Johannesburg, South Africa.

Wits University Football Club boasts the largest number of members for any single sporting code in the university with two men's teams, a ladies teams and a junior program for prospective students.

The Men's & Ladies' First Teams represent the university in the University Sports South Africa (USSA) Football Gauteng league, and are regular participants in the USSA Football National Club Championships competing with the top 16 university teams in the country, held in December of each year. The men's senior team, coached by Mark Haskins, is ranked 8th in the country following participation in the National Championships. The women's team, coached by Jabulile Baloyi, narrowly missed out on qualification. [1] The women's team also occasionally participates in external tournaments, such as the annual Zodwa Khoza Cup. [2]

The USSA Football National Club Championships act as the qualifiers to the prestigious Varsity Sports Football tournament of the following year; with the top eight men's teams and top four ladies' teams affiliated with Varsity Sports booking their place in the tournament.

The Men's First & Reserve Teams are members of SAFA Soweto, with the First Team playing in the Promotional League, playing towards promotion to the SAB Regional League.

Wits FC's home ground is the Bidvest Stadium, located on the university's East Campus in Braamfontein, Johannesburg. The stadium can hold up to 5000 spectators at capacity. The stadium was primarily used by Premier Soccer League outfit, Bidvest Wits F.C., as 50% of the stadium is owned by the university, while Bidvest own the other 50%..

The Rand Stadium is a stadium in Rosettenville, a suburb of Johannesburg, South Africa. It was set to be utilized as a training field for teams participating in the 2010 FIFA World Cup after being completely rebuilt and reopened in August 2008. Despite the relatively small capacity, it is regarded as one of the best playing surfaces in the country.

The Carleton Ravens are the athletic teams that represent Carleton University in Ottawa, Ontario. The most notable sports team for Carleton is the men's basketball team. In men's basketball, the Ravens have won 16 of the last 19 national men's championships, which is more than any top division college in Canada or the United States. The Ravens went on an 87-game winning streak from 2003 to 2006. They also had a 54-game home winning streak. The Ravens finished 2nd in the World University Basketball Championships in 2004.

The Alabama Crimson Tide refers to the intercollegiate athletic varsity teams that represent the University of Alabama, located in Tuscaloosa. The Crimson Tide teams compete in the National Collegiate Athletic Association's Division I as a member of the Southeastern Conference (SEC). The Spirit Squads compete in the UCA and UDA College National Championships. 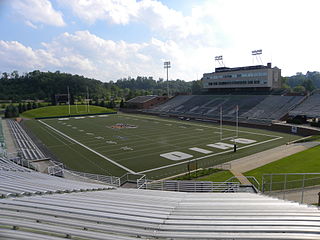 Bidvest Stadium, is a multipurpose sports stadium in the Braampark, suburb of Johannesburg, South Africa.

The Harvard Rugby Football Club is a collegiate rugby team at Harvard College. Harvard's team is the oldest Rugby team in the United States. With around 60 members, Harvard Rugby is also one of the largest club teams at Harvard. In past years, the team traveled to Berkeley, California for the National Tournament after having taken the Ivy League title.

The Brown Bears are the sports teams that represent Brown University, an American university located in Providence, Rhode Island. The Bears are part of the Ivy League conference. Brown's mascot is Bruno. Both the men's and women's teams share the name, competing in 28 National Collegiate Athletic Association (NCAA) Division I sports. In football, the Bears, along with all other the Ivy League teams, compete in the Football Championship Subdivision (FCS).

Emerald Force Soccer Club, formerly known and nicknamed as the Knoxville Force, was an American soccer club based in Knoxville, Tennessee, United States. Founded in 2010, the senior team was part of the Southeast Conference within the South Region of the National Premier Soccer League (NPSL), the fourth tier of the American Soccer Pyramid. Additionally, the club fielded a Women's team which competed in the Southeast Conference of the Women's Premier Soccer League, several youth teams, and an academy system.

Oxford University Women’s Association Football Club is an English football club representing the University of Oxford. The club consists of two squads, the Blues and the Furies. Both teams compete in the BUCS League against other British universities. The Blues won BUCS Midlands Division 2A in the 2013/2014 season, gaining them promotion into Midlands Division 1A. The Blues have retained their place in this league for the 2016/17 season. The Furies won the Midlands 3A league in 2015/16, gaining promotion to the 2A division.

Mark Robert Conover was an American long distance runner and coach. He was born in Contra Costa County, California. He is most famous for his unexpected strategic victory at the 1988 United States Olympic Trials marathon, qualifying him for the 1988 Summer Olympics in Seoul, South Korea, where he was a member of the U.S. Team. The winning time of 2:12:26 at the Olympic trials was his personal best. 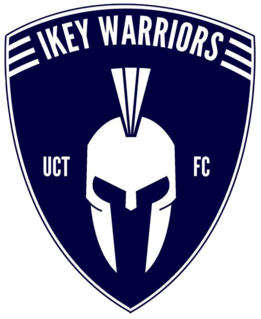